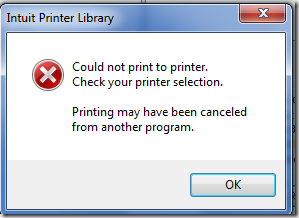 Last September I ran into the only serious issue I’ve had with the 64-bit version of Windows 7 – an error in Quickbooks 2008 using its PDF converter to create email messages with attached invoices. After an annoying amount of digging, I found an answer that worked for me, which supposedly had been fully implemented in Quickbooks 2009 release 9.

A couple of weeks ago I upgraded to Quickbooks 2010 and guess what! The return of an old friend: an error message from the Quickbooks PDF Converter when I attempted to send some invoices. Actually several messages, similar but not identical to the one at left and the ones referred to in the support documents.

Just like last year, there are several possible causes and several possible fixes. This blog has a nice description of the various fixes that might be effective. In my case, this support note from Intuit about deleting and recreating the Intuit printer driver was completely useless, but this one offering a replacement DLL appears to have fixed things up.

I have questions but no answers.