It’s Windows 7 week! Engadget and Gizmodo are working overtime to keep up with new product announcements, advertisements are starting to appear, bloggers and pundits are weighing in, all leading up to the official Windows 7 launch date on Thursday October 22. I’ve been using Windows 7 on my computers for several months; in the next few days, I’ll point out a couple of the new features that have proven to be surprisingly useful. 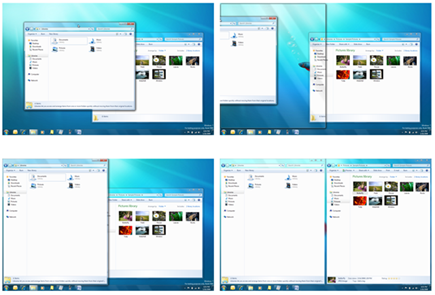 When I first heard about Snap, it sounded like a gimmick – some visual tricks for resizing windows. Now I use it all the time.

The basic idea is simple: grab a window by clicking on the top title bar and drag it around.

If you drag it until the mouse cursor touches the top of the screen, the window expands to full screen, just as if you had clicked the “Maximize” button in the upper right. Drag the title bar off the top, the window returns to a window.

That’s not all that exciting, although it adds something for people using dual monitors. For the first time it’s possible to drag a full-screen program from one monitor to another in a single motion. Grab the title bar and pull it away from the top of the screen, move it to the other monitor, and move the mouse to the top of the screen so the program goes to full-screen on monitor 2. People who use two monitors should be nodding right now, thinking, yup, that’s easier than what I’ve been doing.

There’s another Snap feature, though, that’s even better.

If you drag a window until the mouse cursor touches the left side of the screen, the program expands to fill exactly half the screen.

And voila! Two programs side by side. For editing documents side by side, for copying information from one program to another, for cutting and pasting – this is just wildly convenient compared with manually positioning two windows. Again, if you drag the window away, it returns to its original shape.

And there’s one more trick. If you grab the top bar of a window and resize the window by dragging the bar to the top of the screen, the window will automatically extend itself down to the bottom of the screen. On a widescreen monitor, you might want to see a taller window but not necessarily have it fill the screen. It’s a bit more subtle but a nice thing to discover.