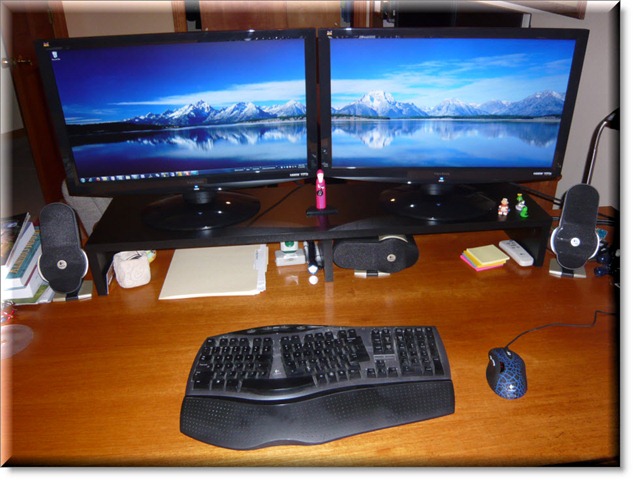 I gave in to the allure of dual monitors. Maybe you should too.

If your computer runs Vista or Windows 7, it probably can run dual monitors without any fuss. Look in the back of the computer next to the place where your monitor is plugged in – you’ll likely find an unused monitor port. If that port is there, this process is easy. You’re looking for an unused port that looks like either of the ports in the picture below – probably the DVI digital port on the left. If you have a Dell computer, you may have a six inch dongle in the back of the computer with your monitor plugged into one of the two dangling ports and the other one waiting for a second monitor.

If you don’t already have an unused video port (or if your computer is several years old and runs Windows XP), you can still run dual monitors but it’s likely to be much more of an exercise.

Many lawyers and business people run one program continuously and find that it’s convenient to be able to keep it in view constantly on one monitor while other work happens on the other screen. Frequently it’s Outlook that sits off to the side so email can be dealt with promptly. Dual monitors also make it far easier to cut and paste between two different windows. The Windows 7 Snap feature to put programs side by side on a widescreen monitor takes away the need for that somewhat.

Almost everyone sets up dual monitors side-by-side, as if the desktop extends seamlessly across the whole expanse. The mouse moves smoothly from left to right, hopping from one screen to the other without missing a beat.

Windows can be dragged from one monitor to the other. Windows 7 makes that particularly easy – grab the top of a window, drag it to the second monitor, and bump the cursor against the top to expand the window to full screen.

Let me give you a few specific tips.

Vista and Windows 7 don’t do as much with wallpaper on dual monitors as you’d expect. You can get the same wallpaper repeated on both monitors but it’s not easy to get different pictures, or a wide picture stretched across both. Install Display Fusion, a free utility to display different wallpaper images on each monitor, or to stretch pictures across both monitors. The paid Pro version can switch wallpaper automatically, get images from online folders, and a few other tricks, but I’ve found the free version is enough. It’s trivial, I know, but it makes a good demo when you want to show off your new toys.

Then park Outlook on one side, open your programs on the other, and get to work!