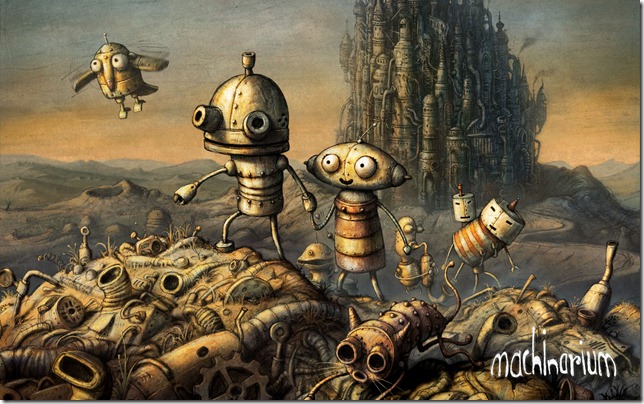 Machinarium is a stunningly beautiful game with hand-drawn characters and backgrounds that are packed with detail and personality. Better yet, it’s an adventure game in the old point-and-click style – no shooting, no running, no reflexes! The game has no dialog, so puzzles are solved the old-fashioned way, by hunting for hot spots and picking up items and trying to figure out a sequence that makes some kind of sense. If you can recover the dog trapped across the water and give it to the woman calling for it, she’ll give you her umbrella, which you can use to walk under the broken pipe, which will let you get to the area where . . . well, if you’ve ever played an adventure game, you get the idea. Like the Sam & Max games and the generations of adventure games before them, this is a game where a notepad is a good idea and where every turn exposes another fiendish puzzle.

You can play a demo from the web site with no fuss – the entire game is written in Flash so the demo starts right away without any installation. The full game is only twenty dollars, paid to small developers who deserve the money. There’s a quiet, mostly ambient soundtrack; a two-tiered hint system, where broad hints are easy to come by but complete answers can only be obtained with a bit of work; a delightful little love story about two robots finding each other; and puzzles easy and hard.

Go read a review or two, go try the demo. I don’t have the reflexes for the latest action games but I can still solve a puzzle, by gum. And really, don’t you love the art? 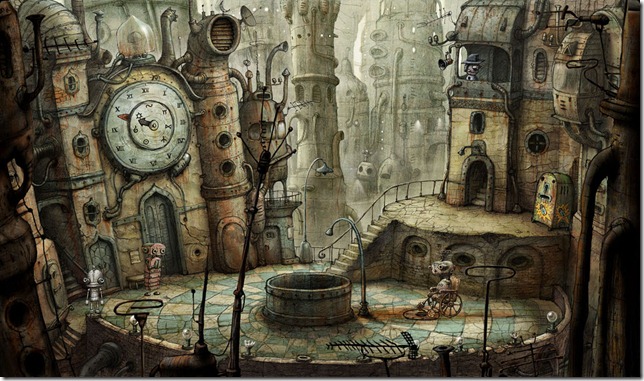