Last year I wrote critical comments about the Fujitsu ScanSnap S1500 desktop scanner’s lack of a TWAIN driver. There’s a way around that shortcoming – one of those tips that’s easy when you find out about it but apparently not obvious, since Fujitsu’s Product Marketing Manager felt he had to write a blog post to point it out. The tip is below; let me give you some background about it.

The S1500 is a very likable scanner at a time when small businesses and law offices are scanning everything they see.

Last year Fujitsu got positive reviews when it introduced the Fujitsu ScanSnap S1500 ($420), with faster scan speeds at the same price as the Documate 152. When I ran into it last year, it upset me that Fujitsu did not let the scanner talk to the computer through an industry-standard TWAIN driver. As near as I could tell, all scanning had to be done with Fujitsu’s proprietary software instead of scanning directly from Adobe Acrobat 9. Fujitsu advertised that as a strength. Here’s Fujitsu’s graphic about the wonderfulness of its “Rack2-Filer” software. 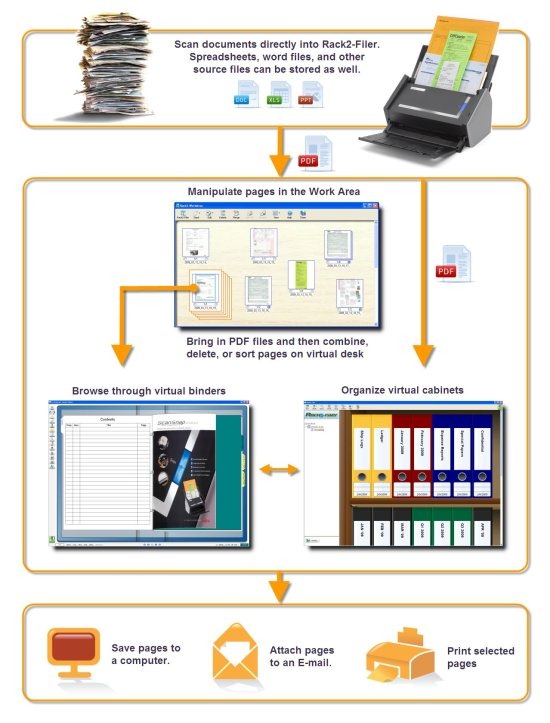 “Virtual binders” and “virtual cabinets” make me do virtual throw up in my virtual mouth. I see proprietary interfaces with a learning curve that distracts from more productive time spent learning the power of Adobe Acrobat.

A simple change in the Fujitsu ScanSnap software sends scans directly to Adobe Acrobat. The scan still has to be started from the Fujitsu software but it can arrive in Acrobat with no intermediate steps. That’s not the way the scanner software was installed by default when I worked with it, and the Product Manager admits that “the standard profile is often changed by the user without realizing it.” Apparently the settings can also be lost if a new version of Acrobat is installed.

The instructions are easy.

With that change, the Fujitsu becomes a pretty appealing choice for a small, fast scanner.