Microsoft OneNote 2010 is the best reason to buy Microsoft Office 2010. It was already a hidden treasure in Office 2007, and the improvements in the new version take it to a new level. OneNote 2010 is so good that you should consider buying Office 2010 just to get it. Microsoft has demonstrated its faith in OneNote by including it in every version of the Office 2010 suite.

In the next couple of days, I’m going to highlight some of the new features in OneNote 2010 that make it so useful.

First, a brief introduction for those of you that aren’t familiar with OneNote yet.

OneNote is a place to store and share ideas and information. It collects your notes and lets you find them later. It keeps anything you want to put into it – scraps of information, web links, photos, videos, files, whatever. You can keep things organized or create a freeform jumble and search for things later (everything is immediately searchable). You can share notebooks easily. The more you use it, the more useful it becomes.

If you take some time to become familiar with it, you might fall in love with it – many people do. Visit the web site, or watch the video for a quick overview of how you can easily organize notes and information:

How to organize stuff in Microsoft OneNote 2010

If you have Office 2010, open OneNote and spend time with the OneNote 2010 Guide that illustrates the basic principles. 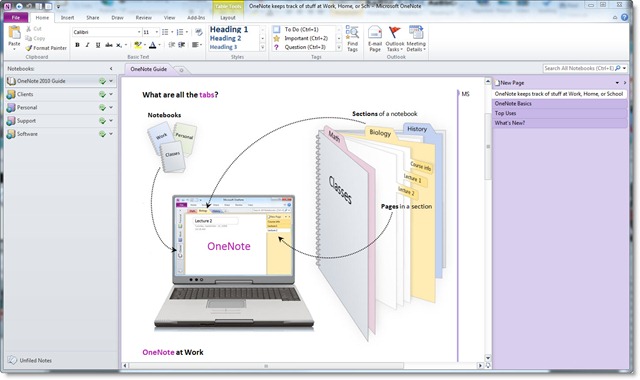 OneNote 2007 felt like a standalone program, used separately from other programs. The new version provides links between OneNote and a number of other programs that open the program up in surprising ways. You might wind up using OneNote only as an accessory to Outlook – and still consider it your best friend. I’ll tell you about that tomorrow.