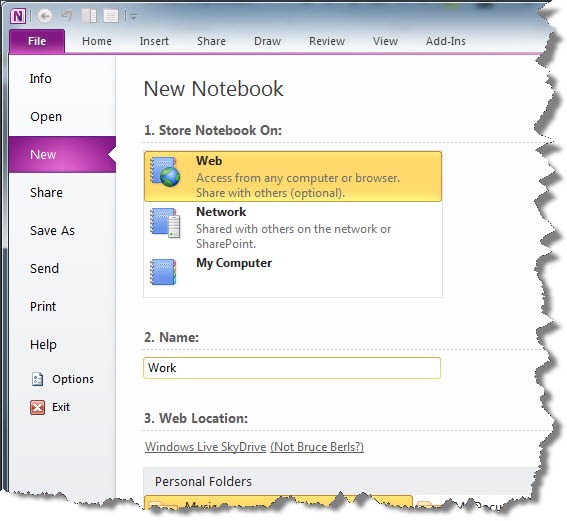 Stick with me. I’m going to describe the feature built into OneNote 2010 that works so well – quietly, seamlessly – that it deserves to be noticed, used, and celebrated.

OneNote 2010 is designed to be used on multiple computers. When you create a notebook, the first option is to store the notebook online. It’s not a requirement but it’s highly recommended.

It doesn’t change your use of OneNote. The program opens and you can use it, regardless of whether you’re online or offline.

And then the magic happens. If you open that notebook on a second computer, changes will be synced back and forth between the computers in real time.

It’s worth noting that OneNote saves everything continuously, automatically, instantly. You never have to remember to save anything in OneNote. It’s saved as you enter it.

This can completely transform the process of collaborating on a project. One consultant put his entire business into shared OneNote notebooks using OneNote 2007; his suggestions would be even easier to implement in the new version.

Before you try putting a notebook online, get your Windows Live ID straightened out. OneNote uses Skydrive to store the online notebooks; you’ll have to be able to log into Skydrive before you work with OneNote’s online features.

The program expects you to store notebooks online. It’s the first choice when you create a new notebook. If you have existing notebooks, click on File / Share for a single-click way to move the notebook online. I created a notebook stored in my Documents folder, then clicked on File / Share. A single click on the “Share Notebook” button moves it online. 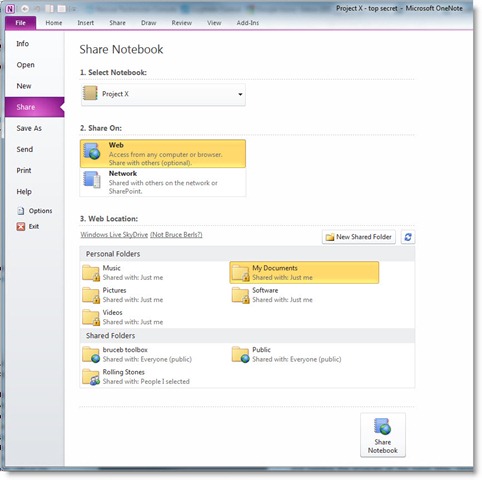 The easiest way to open the online notebook on your second computer is to mail yourself a link to it from the first computer. The URL is shown on the File / Share page, suitable for copying, or you can click “Email Others About the Notebook” and address a message to yourself so you receive it on the second computer. The incoming message will have a link that automatically opens the notebook. 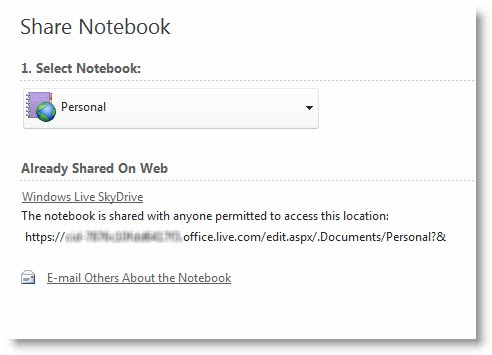 After your notebooks are online, you can also open them from Skydrive in a web browser – OneNote is one of the Office Web Apps. Like the other Office Web Apps, the online version is functional but poorly designed, with a fatal flaw: there is no way to perform a search in the online notebooks. That makes the online web app mildly interesting if you keep your notebooks obsessively organized, and essentially useless if you don’t know exactly where to look. OneNote is built (brilliantly) around the ability to find things quickly, so I find the lack of online search to be baffling.

Recently I wrote an article about my bitter disappointment with Microsoft’s introduction of various ways to sync files among computers and share documents online. OneNote is the brilliant exception. Put your notebooks online, open them from each of the computers you use regularly, and share notebooks whenever you’re collaborating on a project.

Technical note: in some respects, the notebook syncing resembles what Dropbox does so well to sync files between computers. In this case (and this case only), use Microsoft’s built-in sync instead of Dropbox. That’s the only way to take advantage of the ability to work on notebooks simultaneously from different computers; it won’t work if the notebook is stored in Dropbox.

The OneNote team has delivered a brilliantly designed program, with features that complement the other Office 2010 programs and better online integration that anything else released by Microsoft so far. Pay attention to OneNote and make it part of your daily workflow!