Microsoft is finalizing a new version of Windows Live Sync, its free software for syncing files among different computers. The new version replaces the two overlapping programs available from Microsoft for the last few years, Windows Live Sync and Live Mesh, combining features from both of them.

This should be good news. Microsoft has declared that the entire resources of the company are being devoted to moving us to the cloud. The file syncing program could have been an important part of that transition to a new way of working with our files that is less tied to particular computers.

Microsoft has not delivered. In fact, Windows Live Sync is such a crippled piece of work that I don’t recommend you spend any time with it.

I’ve written before about Microsoft’s confusing services for storing files online and syncing them between computers. The names are changing now but the confusion will remain. Here’s a very simplified version of what Microsoft is rolling out or upgrading this summer.

WINDOWS LIVE SKYDRIVE Free online storage of up to 25Gb of files. Accessible from web browser or from Office 2010 programs. Web browser is used for all uploading and downloading of files and all file management. Files and folders in Skydrive are not synced with any files or folders on a local computer.

WINDOWS LIVE SYNC Syncs folders between computers if the computers are online and running the program at the same time. Optionally, up to 2Gb of files and folders can also be synced online.

The important shortcoming of Windows Live Sync: Although Microsoft claims that Windows Live Sync stores its online copy of the files “in Skydrive,” the files are walled off from your other files stored in Skydrive. You cannot access those files using Office Web Apps or the Office 2010 programs. You cannot move files from Skydrive to the online Sync folders.

The result is that both services will be underutilized by businesses.

It requires confusing charts like this to make sense of this morass. 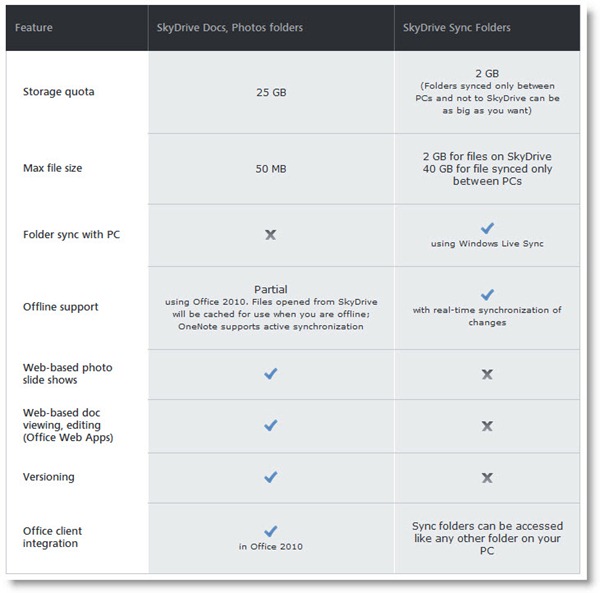 But it gets worse. The new version of Windows Live Sync:

Many of those shortcomings represent steps back from Live Mesh, which was itself a flawed program at best.

Why does this matter?

Almost a year ago I wrote an article about how Microsoft could change the world by moving our files online. Imagine that you could have your office documents appear seamlessly on your office computer, your notebook, your smartphone, and in a web browser on any computer. You could work on them in any of those places, with new and changed files quickly being synced to all the other locations. On your own computers you’d always be accessing files stored locally with Office, using all the rich tools in the Office programs running at full speed. When you’re away from your own computer, you’d still have full access to those files and be able to work on them using Office Web Apps. You could share and collaborate with no technical stumbling blocks – no uploading in a browser, no multiple copies of files.

Microsoft could have offered us something very powerful – true integration of our local files and programs with online components to complement them. Instead it has delivered a second-rate experience that is almost worse than nothing at all.

Almost all the important things wrong with Windows Live Sync are done right by Dropbox, the service that has become essential for many people and now stands alone as a shining example of how to help us move files online. Dropbox creates a single, special folder for synced content. Opening Dropbox in a web browser displays a file list that has everything stored in Dropbox, exactly matching the files on your computers. Special features work without thinking about them. As noted in this critical article about Windows Live Sync:

The contrast with Dropbox is stark. Dropbox supports photo albums, and it supports giving files public URLs. The Dropbox approach is to have two special, blessed directories in your Dropbox hierarchy: one called Photos, one called Public. Each folder within the Photos directory is transformed into an online gallery. Each file within the Public directory gets a public URL. The disjointedness that plagues Live Sync/SkyDrive just doesn’t exist in Dropbox—cloud-synced files can use all the value-added features that Dropbox supports.

I’ve got my vacation photos in a Dropbox folder on my computer. I can send you a link to it and you can view them in a nice gallery view on the Dropbox web site. If I add more pictures to the folder on my computer, you’ll see them the next time you visit the online gallery without any further action on my part – it just happens.

This is a huge failure by Microsoft. Earlier this year I speculated that online file syncing would be deliberately crippled as a way to make Office 2010 look desirable and entice us to buy it.

This is worse than I thought. The Office Web Apps are so weak that they add virtually nothing to the appeal of Office 2010. Crippling Windows Live Sync so it can’t talk to Office Web Apps just adds insult to injury.

But I’m picturing smart people at Microsoft who can understand the implications of limiting Windows Live Sync and preventing us from fully using it. I think they may have been considering the rollout problem. If Microsoft offered a service that could easily sync up to 25Gb of folders online with a few clicks, millions of people would have tried it. It might not be possible to handle the server load and storage requirements of a full-featured service, regardless of the level of preparation.

One way to roll out a service and control the load is to start with a version that is unappealing, then expand it over time. If Microsoft is thinking long term, then it might start with 2Gb of walled storage, then expand it with subscriptions for more storage space (like Dropbox), and slowly begin to make it interoperate with other Skydrive features. One day Live Sync photos could be viewed in galleries, say; another day might allow files to be moved back and forth between Skydrive and Live Sync; and finally the Live Sync files would show up in Office Web Apps. Perhaps the hope is that it can be done without a rush that brings down the whole system.

That’s a generous interpretation of what might have happened behind the scenes. Out in front we’re left with Windows Live Sync as it arrives this summer – stunted, unappealing, and useless.