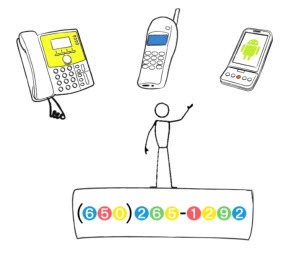 All of this started because I don’t have a reliable cell phone signal at my home office west of Sebastopol. Verizon coverage is erratic and the area has no coverage at all from AT&T, Sprint, or T-Mobile.

If I could, I’d use my cell phone as a single point of contact. Many of you already do that. Google Voice has little to offer you in that case, other than some cool voicemail tricks.

I need to be able to take calls on whatever phone is close to hand that works, and my cell phone doesn’t always work. Google Voice is exactly right for that.

Each direction for each phone had a wrinkle or two to iron out. Here are my stories.

This was the easy part. Google Voice directs incoming calls to my office phone, which is a plain vanilla single Comcast line. The phone rings. I never set up the Comcast voicemail, so there were no voicemail issues on this line.

When I call you by dialing my office phone, your caller ID shows my Comcast phone number – one of the numbers I’m trying to conceal. That had me stuck for quite a while. 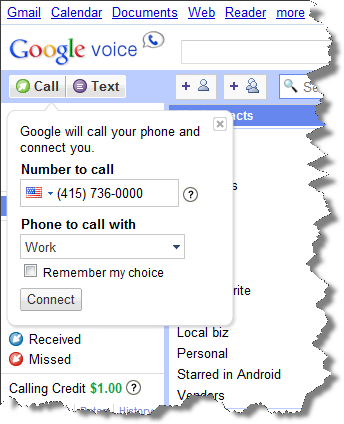 The Google Voice web site has an interesting feature. I can start a Google Voice phone call from the web site by by typing in a phone number or by choosing a name from the Google Contacts address book (the same one used for Gmail). The web page asks which phone to use, from the ones set up on my GV account.

When I choose my office phone (“Phone to call with: Work”) and hit “Connect,” Google Voice first rings my phone; when I pick up, GV then starts the outgoing call. When your phone rings, you see the GV number in your Caller ID display.

By definition, I’m always at my desk when I’m using my office phone. Now that I’m used to it, it’s easier to start a phone call by clicking onscreen than by dialing the phone. I haven’t pushed the buttons on my office phone to make a call for more than a year.

Google Voice is set up on Android phones by installing an app from the Marketplace.

I had a problem with voicemail, though, because the Verizon voicemail would still pick up messages every so often, although both the GV web site and the Android GV app swore that GV would be handling all voicemail. I had to call Verizon and ask them to disable its voicemail on the line completely before I could be sure that GV would get all the voicemail messages.

Google Voice also routes text messages sent to my GV number so they appear on the phone.

I set that up but the result didn’t make sense – the messages displayed a mystery phone number but did not identify the sender by name.

I’m not sure I’ve got this right yet, but I think the messages take a circuitous path, where each phone sending a text message to a Google Voice number is assigned a unique, mystery phone number from Google’s pool of numbers. The mystery number is then permanently assigned to that sender. It’s got something to do with routing the messages so they get to my GV inbox.

When I figured out who a message was from, I added the mystery number to the contact information for that person on the phone. (If you’re syncing with Outlook, the “Pager” number syncs with the phone and won’t confuse you.) Voila! Text messages display the sender’s name now in the GV app.

Does everyone have to go through that? It’s a pain. If I did a lot of text messaging, it would be impossible. I feel like I’m missing something.

Next – more on mobile phones, plus the mysteries of Skype calls!