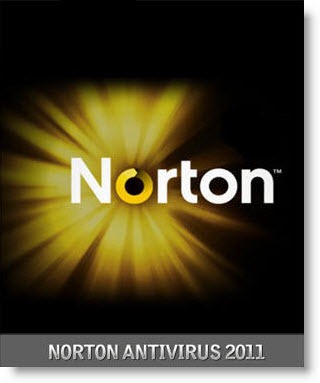 In fact, now that I come to think about it, every computer seems happier when I remove Norton security products. I’ve never seen a computer that wasn’t slowed to a crawl and crashing and throwing up and rendered limp and lifeless when Norton security software was installed. Norton products have given me some of the most frustrating, infuriating, spirit-sucking days of my consulting life. I’m not sure of the technical details but I believe Norton software contributes to third world poverty, global warming, lethargy and depression, and the heartbreak of psoriasis.

So does McAfee software.

Not that I’m bitter.

But surely I’m ready to revisit all of that in the spirit of fairness, now that the new version is fabulously improved, right? Why, here’s a wonderfully favorable review of Norton Internet Security 2011, and it promises that this year the product is ready to stand on its own and not infest computers with demons!

"Most impressive" is one way to describe the latest Norton updates from Symantec. After three years of progressively better versions and significant improvements, Norton Internet Security 2011 and Norton AntiVirus 2011 look incredibly sharp. Gone are the days of crippling system behavior and debatable security efficacy.

And yet – I can’t get over this troubling feeling of déjà vu. What could I be thinking of? Could it be that people writing about software have short memories and don’t actually use the software they review? Could it be that every single year, year in, year out, there are reviewers who diligently report that this year’s version of Norton products are improved over the crappy product on the market the previous year? That can’t be right.

Perhaps it’s just a lingering memory of Norton Internet Security 2010, which really wasn’t a good product in spite of reviews like this:

That makes two years in a row that Norton has done well in my performance tests—I’d say the suite’s past reputation as a resource hog should definitely be dead and buried.

Maybe I’m thinking of the favorable reviews of Norton Internet Security 2009, which was quite a stinker:

Symantec’s goal with Norton Internet Security 2009 was to strip down the suite while improving performance by decreasing its impact on your computer.

Norton AntiVirus is back. With the release of Norton AntiVirus 2007, Symantec has both slimmed down the product and deepened its defenses by rewriting much of the code, making the 2007 version a valuable upgrade for existing users and worth a second look from new users and previously dissatisfied Norton AntiVirus customers.

Symantec have also listened to some of the criticisms from previous versions and have improved the speed of the installation of this package. . . . Norton AntiVirus 2005 is a very able software package that stops all known viruses (including its non-virus brethren like worms and trojan horses) and it’s good to see that Symantec has addressed a variety of the problems from previous versions.

With Norton AntiVirus 2003, Symantec has taken a great product and made it even better.

I’ve often wondered why the favorable reviews keep coming for Norton and McAfee products. I can’t answer that. But I can tell you to heed the voice of someone who works in the real world, not in the labs where reviews are written from press releases. Norton and McAfee do not write good programs. Don’t buy them.

A couple of years ago I took screen shots from CNet’s review pages that sum up everything you need to know. That’s Norton 360 (left) and McAfee Total Protection (right). See the disconnect? 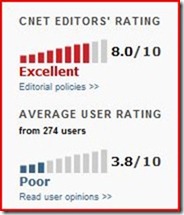 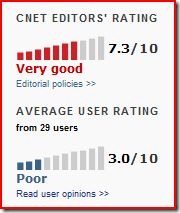