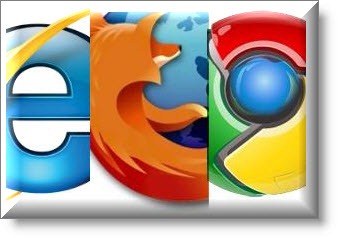 or, How I Learned To Stop Worrying And Love Google Chrome

I am conservative about installing software. I don’t want programs on my computers unless I intend to use them. The first thing I do with a new computer is remove unnecessary utilities and cruddy photo programs and the like installed by the computer manufacturers. I don’t install trial versions of programs until I’ve spent time learning about the programs and deciding if I’m genuinely interested. When I stop using a program, I uninstall it. I use a lot of programs but I have very few programs on my office computer that I don’t use regularly. It’s a recipe for happy computing!

Mozilla Firefox has been a stable, mature Internet browser for years. Nonetheless, I’ve generally advised people to focus on Internet Explorer unless they could articulate some specific reason to prefer Firefox. Most people want an Internet browser, nothing more, and Firefox and Internet Explorer are obviously duplicative – they’re both secure, capable Internet browsers. Enthusiasts and people under 35 can easily move between two duplicative programs, but for many people it makes more sense to have just one program that they use and understand well for a particular function, like Internet browsing. That way there’s always a consistent experience when links are clicked on; there’s only one interface to get used to; and there’s only one program to keep up to date with security patches.

In the last year I’ve had persistent glitches during my Internet browsing. They’re not frequent but things happen to interrupt the flow – pages will stop loading, or a script error window will pop up, or a YouTube video will freeze. Ironically, I began to have trouble loading many Microsoft pages that check Windows Live ID or Microsoft Partner credentials before they load.

Lately it’s begun to happen more frequently, a couple of times a day. A large percentage of my browser crashes involve pages with Flash displays (like YouTube), so it’s certainly possible that Adobe is the villain here, as is so often the case. I’ve done lots of tweaking and twiddling and updating and cleaning caches and other troubleshooting, with no particular improvement.

I couldn’t help noticing that Firefox worked flawlessly almost every time I tried it after being frustrated by an IE crash. Lately I’ve been looking at Google Chrome (recently updated to version 6), and it also flies through the pages that bring IE down.

It seems odd. IE has its critics, sure, but not even the most rabid critic would claim that it’s so fundamentally flawed that it just can’t play Flash videos reliably. (Well, I take that back. The most rabid critics would say that using IE causes brain cancer and Microsoft kills puppies for sport. Let’s not include those critics. IE doesn’t have deep structural flaws.) Other people aren’t flooding online forums with complaints that they get a Page Not Found message when they try to visit their Skydrive site. And yet, I had to believe the evidence in front of my lying eyes – using the other browsers was really making a difference.

That’s how I finally took the step of making Firefox my default browser, and putting all three icons next to each other down on the taskbar. More programs to learn, more programs to keep up to date – but when there’s a specific reason to use a program, then use that program.

If you’ve been frustrated by Internet Explorer crashes, try Firefox or Chrome. There are no guarantees that either of them will improve your life – most of the time when pages don’t load, the fault is at the other end of the connection and there’s nothing wrong with your computer or your connection. But if they work for you, use them with my blessing. Let me repeat the advice from earlier this year:

If you want to use Firefox or Chrome, you should use them. They are mature, stable and full-featured programs. There are two related things to keep in mind about security.