DNS Servers And Problems With OpenDNS

I stand by my reconsideration of Firefox, but I think my criticism of Internet Explorer was unjust. Some of my browsing problems were likely not caused by IE at all. They appear to have been caused by OpenDNS, some settings deep in my office network that affected my Internet browsing.

Consumers and small businesses don’t spend much time thinking about the DNS servers that are working behind the scenes for them. Every time you type an Internet address into your browser (“www.bruceb.com”), the computer consults a DNS server to get directions to that site. The name is translated into an IP address (“72.167.232.68”) and your computer travels down digital highways to the numeric address. Internet traffic is increasingly complex and your browser may generate dozens of DNS lookups to get to a single site.

The DNS server consulted by your computer is probably provided by your Internet provider. Comcast, AT&T, Sonic – all of them run DNS servers to translate names into numbers for their subscribers.

Behind the DNS servers run by the ISPs is a huge infrastructure, of course, with global DNS catalogs and very complex addresses and and rooms full of equipment and many things that will make your head hurt. We’re going to stay low here.

You probably never typed in the numbers of the DNS servers used by your computer or your network. It’s common now for the addresses to be assigned automatically to whatever piece of equipment is hooked up to the Internet connection. If you have a router, chances are that you plugged in the network cable for your DSL or cable connection and the settings arrived automatically from the ISP. When I set up routers and firewall appliances for businesses, I’m more likely to have put them in manually, which is why I can recite the Sonic DNS servers in my sleep. (208.201.224.11 and 208.201.224.33.)

Most people have no reason to change the settings on their network for DNS, but obsessed technical types get irritated if Internet pages are slow to appear because DNS servers are not working like lightning. Imagine clicking on a link to a page and being delayed a second or two because the DNS servers are slow to send your request along its way. Or perhaps pages don’t appear because the ISP has bad information in its DNS servers. Or in the worst case, the ISP starts sending you to its own advertising pages when you mistype an address, instead of a Page Not Found display. (“Your page could not be displayed, but perhaps you’d be interested in the website for Oliver’s Discount Oral Surgery and Cat Washing Boutique!”)

Years ago I was researching some slowdowns that I thought might be caused by Comcast, which has a reputation for slow DNS lookups. I ran across OpenDNS, which claims to provide free, superfast DNS lookups. Lots of favorable reviews and comments. Why not? I started my free account and set the OpenDNS addresses as the default DNS servers for my network. 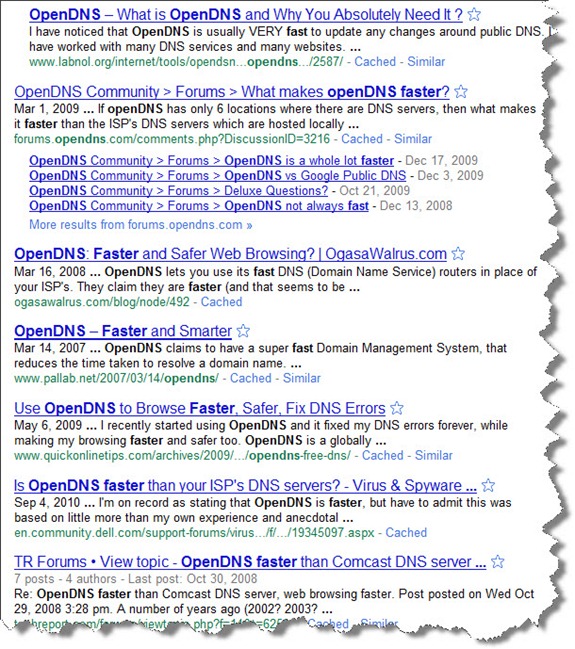 Things seemed fine, although OpenDNS supports itself with exactly what I just mentioned, advertising pages displayed in place of Page Not Found messages. I could live with that, though – Internet browsing seemed snappy.

Then YouTube started seizing up, stuttering or not connecting at all. I blamed Internet Explorer and started switching back and forth between IE, Firefox, and Google Chrome. If one didn’t work, I could frequently paste the same page address into a different browser and bring up the page right away.

One day, though, some neurons fired and I did a bit of research that pointed to a persistent problem with OpenDNS and YouTube. Services like YouTube have enormously complex systems of handling the traffic for all of the video junkies out there, requiring very difficult DNS maneuvers, and some people think OpenDNS doesn’t handle it well. 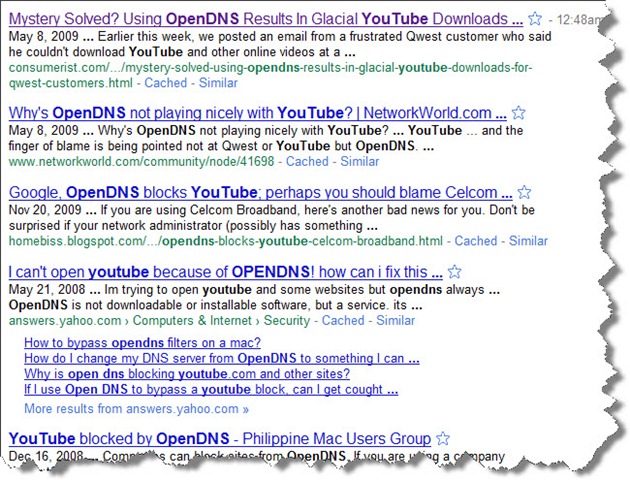 Interesting possibility! I took out the OpenDNS settings and went back to the Comcast DNS servers and found – well, I found that the results were ambiguous. YouTube still seems to have problems with Internet Explorer. I’m not sure if anything is faster or slower. I hoped that the switch might also relieve my persistent problems signing into Windows Live and Microsoft sites, after finding one discussion pointing at OpenDNS as a source of those problems also, but nothing has changed – I still can’t sign into many Microsoft sites using Internet Explorer. It would be amusingly ironic if it wasn’t so infuriating.

OpenDNS is still touted as a magic bullet for fast Internet browsing. Late last year Google introduced “Google Public DNS” as another alternative. (Google: “Our engineers have been working to make improvements to our public DNS resolver to make users’ web-surfing experiences faster, safer and more reliable.”) Technical-minded folks might want to play with these settings on their networks, but the same caveats apply as with everything else in technology today: nothing is easy, nothing is obvious, and nothing comes without side effects.