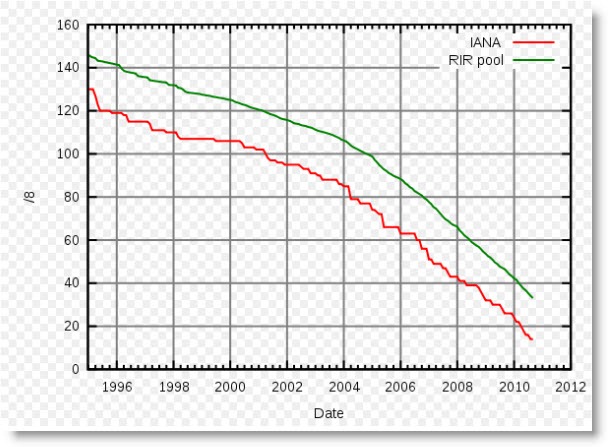 You’re looking at a graph that will get an inordinate amount of attention in the global technical community and cause tremendous disruption for the next few years. Let me give you a very broad overview of an issue that you hope will be solved long before you ever have to know much about it.

The Internet is built on IPv4 addresses, a scheme created in the early 1980s. You’ll recall that when you type in a domain name (“www.bruceb.com”), your computer looks up the name in, roughly, giant telephone books before your browser is sent to the “real” address – the IPv4 address. Behind the scenes, you’re actually being sent to 72.167.232.68. All IPv4 addresses look like that – four groups of numbers, each with 1-3 digits, separated by periods.

The graph above represents the worldwide supply of new IPv4 addresses. Once they’re gone, there aren’t any more.

The IPv4 address pool has 4.3 billion addresses. That’s all there ever can be in the IPv4 system. (It’s a math thing. The architecture doesn’t let us just add a period and some more numbers.) In 1981, that seemed like a huge number. Big chunks of 16 million addresses each were handed to universities and to companies like IBM and HP, because it was convenient and felt safe.

The “Number Resource Organization” announced today that less than 5% of the world’s IPv4 addresses remain unallocated. 4.3 billion addresses (of which 3.7 billion are usable) only go so far in a world with 7 billion people. Current projections show that the entire pool will be exhausted sometime next year.

At the beginning of the 90s, a lot of smart people could see this coming and created a scheme that would permanently resolve matters, as long as everyone cooperated and began laying the groundwork for a costly and disruptive transition to a new system. When the replacement was finalized, the best guess was that it had to be in place within twenty years.

Beginning immediately, virtually everyone affected – ISPs, telcos, regulatory agencies, engineers, network administrators, big companies, small companies, software designers, consultants – did the only thing that they could all agree on: they procrastinated. For roughly eighteen years. Now it’s crunch time and there is about to be a lot of fuss, probably with screaming.

I’ll tell you tomorrow about IPv6, the new protocol that provides a way out of this jam, but first let me reassure you that you are not going to be directly affected by this for a long time. The panic will all be felt at a level above our heads; I don’t foresee a lot of disruption in the next few years for small businesses in the US with a DSL line and a server or two. There are a few reasons for that. 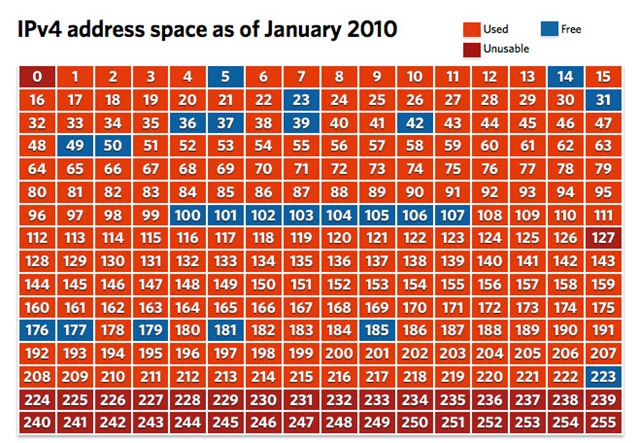 Nonetheless, the charts don’t lie. Within a few years, every single thing you know about networking will be obsolete. We will look back nostalgically on the days of numbers we could memorize. (Ah, Sonic DNS servers, I knew you well.)