It’s hard to remember how much of an impact Small Business Server had on small offices when Microsoft released the first version in 2000. Until then, nothing had been available that would let a small business run a reasonable mail system or handle security for logons and file sharing. In those days files were shared from a co-worker’s Windows 98 computer – when it went down, everyone stopped working while the system rebooted. SBS 2000 changed all that by giving small businesses an affordable way to begin logging into a true domain, using Exchange for mail, all powered by a server that wouldn’t crash.

SBS 2000 was quirky and difficult to manage, but Microsoft hit a home run when it revamped the controls in SBS 2003, and especially when it introduced Remote Web Workplace, making remote access and webmail available to all. The impact of Remote Web Workplace cannot be overstated; being able to be connected from anywhere to mail and office computers was eye-opening and important. We take it for granted today but it was remarkable to see it in 2003.

SBS 2003 was priced affordably and needed a minimum of attention once it was up and running. Despite some half-hearted attempts to include simplified control panels, SBS 2003 was never likely to be managed by someone inside the business, but even modestly-trained consultants (cough) could set up and manage an SBS 2003 server. 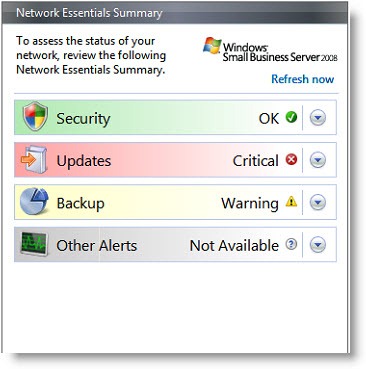 The next revision, SBS 2008, was . . . nice. There was a distinct lack of excitement. The migration from SBS 2003 to SBS 2008 is difficult, time-consuming, and fraught with error, and the advantages are slight. There’s a control panel that is very busy and yet somehow gives me very little information that I find very useful. There are some nice, incremental tweaks – a better-looking version of Outlook Web Access, more fine-grained control over remote access to onsite computers, a few other things – but also far more complex underpinnings that require more difficult work to set up and maintain. (Example: There is probably a role in large companies for Windows Server Update Services, a service intended to centralize the job of patching Windows and Office on business computers. I’ve tried to make it work – oh, my, the hours I’ve spent trying to make it work. Time consuming to manage, constant tweaking necessary to keep it running, and all to get the same result as if I had turned on Automatic Updates on each computer and checked every so often to be sure everyone had left it alone.)

I did not migrate many clients from SBS 2003 to SBS 2008 – the cost and difficulty of the migration were too high, the advantages were not very compelling. A fair number of small businesses are running Small Business Server 2003 on servers that are 4-7 years old. Those businesses are overdue for an upgrade to some of the new Microsoft technology arriving soon – but it might not be to the direct upgrade of Small Business Server with all its features.

What are those features? Broadly, these are the features of SBS 2003 and SBS 2008 that will be carried forward to SBS 2011 Standard.

It’s been increasingly uncomfortable to rely on that setup as small businesses have become ever more dependent on services continuing to be available 24×7, no excuses.

Small Business Server 2011 Standard carries that concept forward, and I expect businesses with 25-75 employees will put it to good use, along with ever more sophisticated backup and recovery plans and virtualized environments providing redundancy. I’ll describe the upcoming upgrade to SBS 2011 Standard later this week.

But I’m not sure I’ll ever set up an SBS 2011 Standard server in the businesses I work with, typically 25 employees or less, because Microsoft has set up some appealing new options. Very small businesses will likely not migrate to a bigger, more complicated version of what they’ve been running. They’ll send some of those pieces to the cloud and make it Microsoft’s problem to keep services running and backed up. The parts that remain onsite will be simpler, cheaper, and easier to manage.

Next: a short history of Windows Home Server, providing the technology that will power the new generation of servers for small offices.