The Increasing Need For Bandwidth, Part 1

Many small businesses and homes will feel the need to increase the speed of their Internet connection in 2011.

In the late 1990s, we began the serious movement away from our dialup modems and started signing up for DSL service as it became available in selected areas. Moving from a 40K connection to a 1.5Mb connection was such a staggering improvement that many people still think of plain old DSL as a “broadband” connection, ten years later.

Our need for a constant flow of data to the multiple computers in our home and businesses has outpaced that DSL connection. If you still have a 1.5Mb DSL line, it’s time to consider upgrading it for more speed. It’s becoming a bottleneck that prevents you from taking advantage of the online services that are important to your business. At home you’re about to lose touch with many of the entertainment services springing up now, and it’s becoming more difficult for your kids to take advantage of the educational and social uses of the Internet. Wired Magazine caused a fuss with its article “The Web Is Dead. Long Live The Internet,” highlighting the shift in the way we use these connections.

It’s easy to imagine why a home user would feel constrained by a 1.5Mb DSL connection. We are watching a huge amount of online video now, so much that it is straining the infrastructure delivering our connections. When you add Skype, online games, and BitTorrent to the streaming Netflix movies and Hulu TV shows, there is a thirst for bandwidth at home that far exceeds what you used to need for simple web browsing and email. You’ll likely expect to watch some kind of streaming video on your next television but it’s just not going to happen over a basic DSL line.

There are starting to be equally compelling reasons for small businesses to need additional bandwidth. The computers at the business are ever more likely to be using their Internet connections continuously or in big chunks, dividing up the available bandwidth and fighting each other to get adequate performance.

An important technical fact: most broadband connections are asymmetrical, delivering the advertised speed for downloads but far less bandwidth for uploads. (You’ve probably heard about the fabled “T1 Line.” It’s only a 1.5Mb connection! The speed is symmetrical up and down, which makes a surprising difference, but it’s not fast – in fact, it’s sluggish by today’s standards.)

A 1.5Mb DSL line is likely to offer only 256K for uploads. When two or three people in a business hit “Send” on email messages with 5Mb attachments, those messages are going to sit in each outbox for a disturbingly long time, using up the entire company’s bandwidth until they’ve made it out the door. 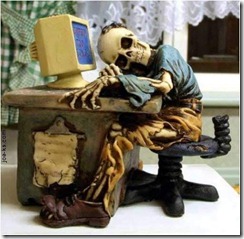 Businesses are less likely to be streaming video, but the flow of email in and out is steadily increasing, and I’m rather stunned by the number of employees that are streaming Pandora or online radio stations. Add someone downloading an update or a new program and you have a recipe for everyone to complain about a slow connection.

The changing need for speed lies behind the recent pronouncement by the FCC that 68 percent of "broadband" connections in the US can’t really be considered broadband. As currently defined by the FCC, a connection is not truly broadband unless it is at least 4Mb/downstream and 1Mb/upstream.

If you have a DSL line delivered by AT&T or Sonic, think about whether you’re starting to feel a bit constrained. Next time I’ll have some specific ideas about how to test your connection and what options you have!