The Increasing Need For Bandwidth, Part 2

You should know the basic details of the Internet connection at your home or business. 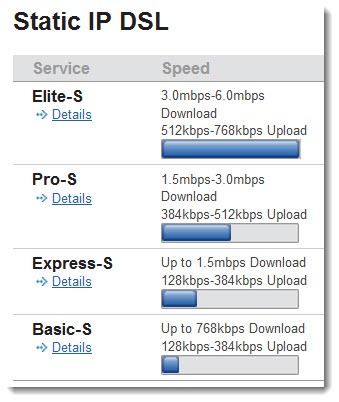 Find out the speed of your existing service. If you have a DSL line – typically from AT&T or Sonic, occasionally from smaller players – it has a rated speed. For example, Sonic has four tiers of DSL service, from very slow 768K to 6Mb download speeds. That roughly matches the AT&T tiers. Comcast has several levels of service from 12Mb up to 100Mb download speeds.

Test the speed. At a time when there is as little activity on the connection as possible (no one streaming movies or running torrents), go to Bandwidth Speed Test or Speed.io Speed Test and see what they report. Those tests will never be very accurate but you can get an idea of where you stand.

If you have begun to feel any bandwidth constraints, then inquire whether faster service is available from your existing provider. You may discover that you can increase your DSL speed to 3Mb or 6Mb or more for a few dollars per month. Increasing the speed of an existing connection is usually not disruptive. It might be as simple as a phone call.

If you are in the North Bay you may be able to get faster service from Sonic delivered completely separately from AT&T. Sonic’s Fusion service attempts to bypass AT&T copper lines as far as possible. It is only available in limited areas but it is a delightful option if you are lucky enough to be in range. The speeds are comparable to cable – 20-40Mb – and Sonic continues to be the nicest company in the world to do business with.

[Footnote: I hope you saw the announcement that Sonic was chosen by Google as its partner in a pilot project to bring fiber to homes in Palo Alto. Sonic – our little local company! – is transforming itself from a small ISP into an internationally-recognized innovator working at the forefront of new technology. They’ve never stopped focusing on providing the best customer service in the business and they’ve survived a shakeout that took down virtually every other similar business in the country. I’m very proud of them.]

Be aware that changing DSL providers or changing the location for your existing DSL service is fraught with error! If you are a business, you should be working very carefully, or engaging a consultant, to manage that process. I’ve known too many people who wound up with no Internet service after a move for extended periods, caught in a hellish AT&T quagmire.

Small businesses should call Comcast and find out if their building is wired for Comcast Business Class Internet. Comcast provides connections that are far above anything delivered by AT&T. Basic service starts at 12Mb down, 2Mb up, and more money buys more speed, frequently more than you would have imagined. I’m out in the country and I’m about to move to 50Mb down, 12Mb up for a modest increase in the monthly bill. Comcast is in the middle of yet another equipment upgrade that will permit even faster speeds in 2011.

If you are not in a major city, you may not be able to get faster service. That includes big parts of the North Bay. I’ve seen two primary reasons for that:

Here’s what this all means for small businesses that are choosing a location or considering a move.

When you consider a business location, the speed of the Internet connection at that location should be one of the most important things on your checklist. Your business will live or die by that connection and you cannot assume that a connection will be available or will be adequate for your needs.

I’ve known several businesses lately that have discovered to their chagrin that their new location would not support a decent Internet connection. When that happens, there might not be any fallback other than a mind-bogglingly expensive T3 line that completely blows out all the budget planning. The Internet connection is as important as the rent, the cost per square foot, the amenities, and the parking. It might be more important.

If you’re in Santa Rosa, you might be surprised that the area around Coddingtown is a hole with no service or limited service. I’ve got clients in offices north of Coddingtown on Cleveland Avenue that can’t get any reasonably priced service at all. Offices immediately behind Coddingtown can only get sub-DSL speeds. There is another hole over on Dutton Avenue near College – I know businesses over there that found they could not survive sharing a sub-DSL speed connection.

Over in shared suites on Stony Point Circle, the tenants get sub-DSL speed connections. Go north on Old Redwood Highway past the Kaiser buildings and you enter an area with no wired service at all.

These are the urban parts of the North Bay. Once you leave city limits, it is a mishmash where Comcast might deliver a 50Mb connection at one address and leave a neighbor down the street with no options. The satellite services are overloaded and not taking new customers, and data plans with a cell phone provider only work where there is a strong signal, which disqualifies most of West County.

Your Internet connection is the lifeline of your business. You wouldn’t rent an office suite that didn’t have adequate water pressure or electricity. Add the Internet connection to the same list of basic requirements. Think about it ahead of time and consider upgrading it at your existing location.