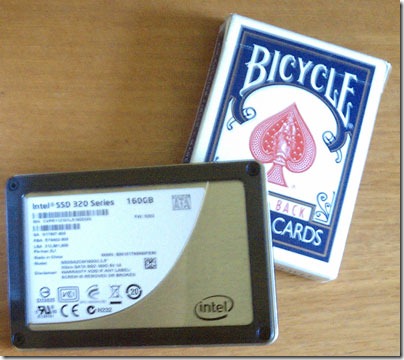 The little device in the picture – about the size of a deck of playing cards, less than half as thick – is an Intel 160Gb solid state hard drive. It has given me a more significant speed boost for my computer than any other single device that I can recall – ever, in all my years of computing. It’s been a more noticeable improvement than years past when I have swapped a motherboard to get Intel’s latest and greatest processor, or added more memory to a system that needed it.

Solid state hard drives are starting to be sold preinstalled in new computers – still rare but likely to be much more visible in the next few months. The price bump is quite noticeable. Yet those of you interested in performance will have to consider it for your next computer, starting right now.

Conventional hard drives are mechanical devices. A hard drive has very, very thin round platters spinning incredibly fast (typically 7200 revolutions per minute), while arms with microscopically small sensors dance back and forth fifty times per second (about the speed of a hummingbird’s wings). The space between a read/write head and the surface of the platter is around 50 nanometers, about 1/2000 the diameter of a human hair. Hard drive cases are tightly sealed because a speck of dust is much bigger than the space between the platters and the read/write head.

A solid state drive is more or less equivalent to a giant USB memory stick. It holds everything on chips, with no moving parts. The picture below shows the inside of a conventional hard drive on top, a solid state hard drive below. 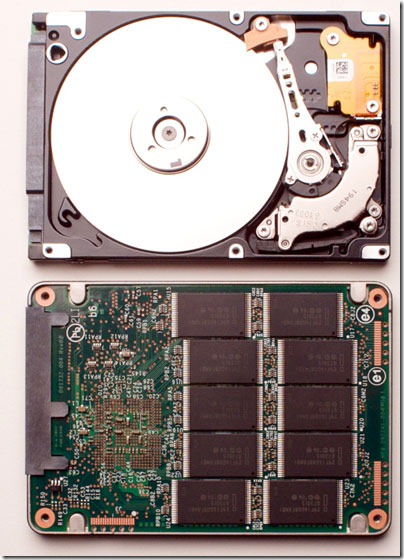 There is a lot of history that  has led to solid state drives being as reliable and long lasting as conventional drives. (There is still some debate about that but reliability and longevity have reached the point that the quibbles are technical and not very important.) Intel used to make more reliable SSDs than other manufacturers but that no longer appears to be particularly true – all of the SSDs are basically solid.

The slowest SSD is able to read and write data at a rate that eclipses the fastest conventional hard drive.

There is a dramatic and noticeable difference in the feel of running day-to-day programs. Programs start instantly, as soon as an icon is clicked. Outlook is ready without any delay. Windows snap into place. It is very difficult to sit down at a computer with a conventional drive after using a system with an SSD.

And startup! I get to a usable desktop on my notebook – all programs started, logged into Microsoft Online Services, all hard drive activity finished – in 22 seconds from a dead turned off computer. But it’s never turned off! When I close the lid, the notebook goes into a hybrid sleep that uses no power, for all intents and purposes. It resumes to a usable desktop in 3 seconds. It’s close enough that in my mind it’s an Instant On device, as much as the iPad next to it.

My desktop computer has a lot of startup programs, more than most people. For the last few months it was taking 90-100 seconds to get to a usable desktop after restarting or shutting down. After installing an SSD in my desktop computer, it takes 25 seconds to be up and running.

So what’s the downside? The usual suspects: cost, and the difficulty of getting there.

A Western Digital 1.5Tb internal drive – roughly ten times the storage space – is $64.99. That’s quite a difference when measured per gigabyte.

Larger SSDs are becoming available but the price scales up quickly into the stratosphere.

If you’re comfortable doing work like this, you can set up the new drive in a desktop computer and use a utility supplied by Intel to copy an image of your existing drive onto the new SSD, then swap cables around so the new drive takes over. There are some technical things to check about your computer before you start, some fumbling to do with files (especially if you currently have more than 160Gb on your C: drive), and the possibility of technical wobbles with the imaging process. It’s not going to make economic sense for you to hire me to do that – too many hours go by before it’s done. It’s not going to make technical sense for you to do that yourself unless you are confident about your technical chops.

(Side note about the technical details: this is for Windows 7 only. You can’t speed up an old computer by doing this. Windows 7 is optimized for SSDs and actually turns various things on and off when it senses that an SSD has been installed.)

I had a technical glitch with the Intel imaging process (actually a program licensed from Acronis and customized, that then begs you to purchase an upgraded version after you’re done), and I had other reasons for wanting a fresh start on my desktop computer. I wound up reformatting the new SSD and installing everything from scratch. So I can tell you with some confidence that it takes more than ten hours to install Windows, Office, all utilities, about 30 productivity programs, and all updates – if you move confidently, don’t run into any major glitches, and have all your media and passwords well organized.

Instead, I want you to have SSDs in mind when you next buy a notebook or a desktop. The difference in performance on a notebook simply turns it into a different tool that you will be much more willing to pull out to jot a note or check your calendar.

On a desktop, an SSD to run the operating system can be paired with a large conventional drive to store data. You get the best of both worlds.

If you can afford to have a computer that works as fast as you do, you’ll have to consider this for your next computer. You won’t regret it, I promise.