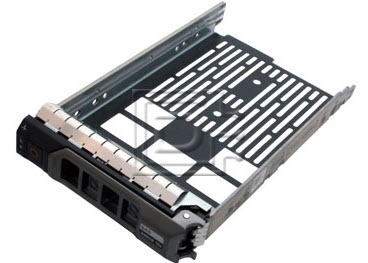 When you’re wrestling with your computer and wondering why everything has to be so complicated, maybe it will help to know that you’re not alone. It’s not any better behind the curtains where we pull the levers and pretend to be wizards. Here’s a random story about one of my frustrating moments this week.

One of the challenges of doing work with very small businesses is that there’s very little continuity. An IT person at a larger company will set up the same servers over and over, with shelves full of parts and a lot of time to learn the ins and outs of the equipment. I seldom order the same thing twice; models change too quickly and hardware is customized for the budget and needs of each client. When I order a particular model of server, it’s almost never exactly the same as the one I set up a couple of months before.

That’s how I found myself ordering a Dell PowerEdge 310 server with a RAID controller that was new to me. The PERC H200 is relatively new and seemed like a good choice when I did my homework – reasonable price, adequate to support the storage the client would likely need, good feedback. I chose the hot swap configuration; there likely will not be spare drives prepared and unused (don’t underestimate the budget constraints of very small businesses) but the hot swap design makes it easier to get drives in and out when necessary.

The server will be set up with four hard drives in two RAID 1 arrays. RAID 1 mirrors two drives so that the server continues to operate uninterrupted if a drive fails. The plan: a relatively small 250Gb array for the operating system and for some programs; and a 1Tb array for data and for programs that will perform better on a separate physical disk from the OS.

Dell’s configuration page has the RAID options laid out more or less comprehensibly. (I seldom order HP servers, in part because I find it baffling to try to configure them.) 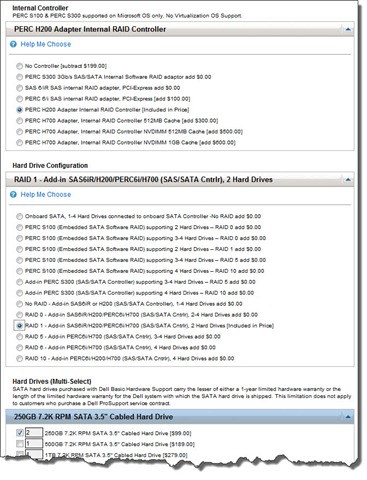 I checked the box to order 2 250Gb drives for the first RAID 1 array, then I hesitated. The 1Tb drives were oddly expensive – $279/each, almost six hundred dollars to have Dell preinstall the next RAID array. These are just SATA drives, I thought. I’ll get them separately and save hundreds of dollars! What a smart, thrifty consultant! I smugly ordered two Western Digital RE4 enterprise-quality 1Tb drives from Amazon for $110/each.

The server arrived, the additional hard drives arrived. I pulled off the front cover and pulled one of the 250Gb drives out of its bay and stared at it nicely snuggled in the supplied hard drive carrier. I put it back and pulled out one of the empty trays so I could put in the first 1Tb drive.

And that’s how I found out something that’s obvious to people who have done this before. If you don’t get hard drives from Dell, Dell doesn’t include the trays that are required to hold the drives. You can’t easily add more drives. There’s nothing to hold them in place.

Have you ever called Dell’s parts department? You don’t want to. My experiences with Dell Parts have been miserable – multiple phone calls with poorly trained salespeople, incomprehensible accents, dropped connections, wrong items, slow shipments. A couple of years ago I spent way too much time and effort trying to get a nine dollar fan. Life is too short. I couldn’t bring myself to pick up the phone.

Fortunately DiscountTechnology.com had the right trays in stock. It tells you something that the company has twenty different Dell hard drive trays listed. (This isn’t a Dell issue, by the way. The same page lists almost a dozen HP/Compaq trays and another dozen IBM trays.) I set the server aside for a few days until the parts arrived. Tonight I’m finishing the setup. Life is good.

Just a minor detour of a major project – but imagine if this project was under time pressure! It was delayed and nearly derailed because a metal tray was missing.

Nothing is easy. Move carefully and don’t be surprised if your projects have unexpected pitfalls and difficult bits!