The Elder Scrolls V: Skyrim And The Steam Platform

On 11/11/11, a new game will be released that has a lot of people panting in anticipation. The Elder Scrolls V: Skyrim is the latest game in a series that goes back to the dawn of computer gaming when The Elder Scrolls: Arena was released in 1994 for DOS computers. Since then, each successive game has caused endless lost hours for computer gamers as they explored vast landscapes filled with open-ended fantasy adventures.

As with its predecessors, Skyrim is a single-player game, defying the industry’s move to online multiplayer games that require more expertise than aging baby boomers can bring to the keyboard. Skyrim will have its share of fast-paced fighting but it can be explored at a relatively leisurely pace for the people who will play with reading glasses.

It promises to be an extraordinary experience, but I’m not going to try to sell it to you – the reviewers can do that. Well, one random screen shot (here’s a gallery if you want to browse). 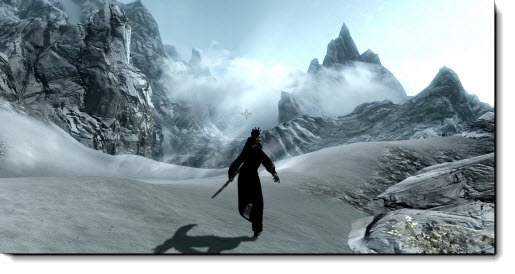 The technology used to deliver it to gamers is interesting if you haven’t run into it. There are successful PC games on the market but gamers aren’t buying them in boxes at Costco, like they might have a few years ago. The most important platform is named Steam, which is now deeply entrenched with partnerships to distribute games from many of the biggest publishers in the industry.

A free Steam account sets you up to purchase games and populate an online “library”. A small bit of software runs on your computer to check your license when you start a game, and facilitates all the features of multiplayer games and communities and chats and all the other things that the young’uns do.

Steam also takes care of the process of downloading and installing games, which is where the genius comes from that allows a huge population of gamers to start playing Skyrim soon.

It’s been possible to pre-order Skyrim for months from Steam. Not long ago a button appeared in the Steam library to “pre-load” Skyrim. 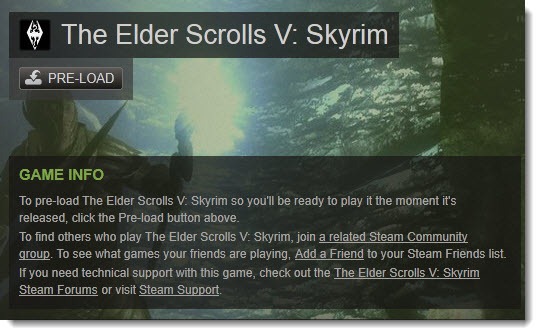 For the last few days, bits of Skyrim have been trickling down into tens or hundreds of thousands of computers, until the entire game is loaded and ready, waiting for a signal from Steam to change that button to “Play.”

At midnight EST, the button will change to play. Steam will issue a command from its servers and the game will go live. No waiting for an Amazon delivery, no lengthy install routine – just count the ticks of the clock and go.

I kind of have to go now.