Microsoft Office 365 has been tremendously successful so far, certainly from a sales perspective (millions of subscriptions, although the exact number is kept under wraps), but more importantly it’s also been successful from a technical perspective. There has been no downtime for the last few months. My clients are ecstatic that I can set passwords not to expire. Smaller businesses are being migrated from the older Microsoft Online Services platform; my clients’ experiences have not been completely smooth but no data has been lost and support for minor glitches has been readily available. Life on Office 365 is good.

So although I’m going to describe a technical issue, it’s a fairly insignificant one that has affected less than a dozen people in my personal experience. It’s an interesting and tricky problem! 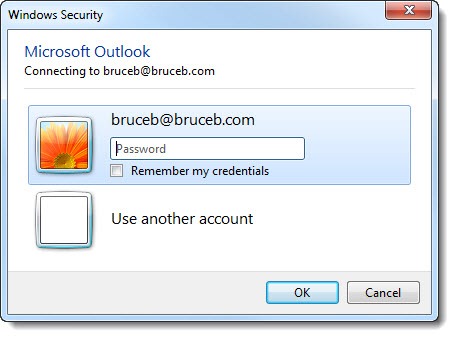 Basically, at random times Outlook pops up a box and asks for the password for the Office 365 account. It’s usually when Outlook starts but occasionally happens in the middle of the day. Most people find that checking the box to “remember my credentials” makes the prompt disappear for days or weeks but others have it popping up frequently, as often as every few minutes. (Again, to be clear, most people don’t see this at all. This isn’t widespread.)

Take a peek under the hood to understand why it’s not supposed to do that.

The prior Microsoft service, Microsoft Online Services (aka Business Productivity Online Suite, aka BPOS) installed the Microsoft Online Services Sign In program, which ran at startup and displayed its little blue icon continuously down in the lower right corner. Its job was to log each person into the service and keep them logged in through thick and thin. When Outlook occasionally became confused and displayed the above password prompt, no password would satisfy it. The only answer was to shut down Outlook completely and sort things out with the sign in program.

That was never clearly understood by end users so Microsoft reworked the process for Office 365. A different program is installed for Office 365 and the old sign in program is removed. To Microsoft’s eternal shame, the new program has an almost identical name, “Microsoft Online Services Sign-in Assistant,” apparently to make this as confusing as possible. You can imagine how much fun it is to advise people what to uninstall when the list in Control Panel looks like this.

The new sign-in program runs completely unseen. Its job is to get the Office 365 credentials from a user when the program is installed, then provide them to the Office 365 service whenever they are required, all completely invisibly. You’re not supposed to have to put your Office 365 password when you click into the Office 365 portal or Outlook Web Access or Sharepoint portal. Behind the scenes the sign-in assistant is taking care of that for you.

Outlook is a special case. As I understand it, the sign-in assistant does not interact with Outlook. Instead, Outlook relies on its built-in ability to memorize credentials (assisted by Windows). My gut tells me something is done on the server side as well to avoid challenging Outlook very often but I don’t know that for sure.

In the last couple of weeks I’ve gotten more reports than usual from people being prompted repeatedly for their Office 365 passwords. I don’t yet know the entire answer but I’ve got some clues, and I’ve been doing some magic dances that seem to help.

There is reason to suspect that Microsoft is moving Office 365 mailboxes from one server to another behind the scenes. That’s meant to be completely hidden! Outlook is automatically updated with new server names deep in the mailbox settings. We don’t care whether the Microsoft server is named ch1prd0404.outlook.com or pod51009.outlook.com.

In one perceptive forum message, though, “WhiteKnight” found that every time one of his users was prompted for a password, the underlying server had changed for the mailbox. He reports Office 365 mailboxes that have gone through seven different servers. Either Microsoft is making more changes than expected as they balance out the Office 365 load, or there’s an error in the way the servers are set up that causes them to challenge users too often.

In my experience, the repeated password prompts are happening far more often with Outlook 2007 than with Outlook 2010. In many cases the most recent service pack has not been installed. Office 2007 Service Pack 3 is pushed as an Important update but not automatically installed. It’s a huge download and slow to install and frequently requires a system restart.

A couple of days ago another update began to be pushed as an Important update, called “Update Rollup for Microsoft Online Services Sign-In Assistant.” The KB article describes users being “repeatedly prompted for credentials.” Looking deeper into it makes me think that the update actually addresses a completely different problem and does not affect Outlook – but it’s a striking coincidence that an update for the Sign In Assistant appeared at exactly the moment that I was looking for it. 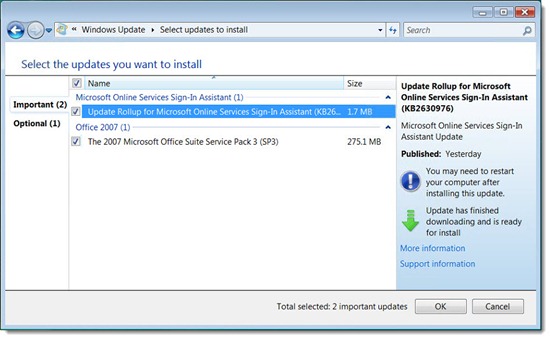 POSSIBLE FIX NO. 2: SAVE CREDENTIALS AT THE OFFICE 365 PORTAL

As I understand it, though, that prompt isn’t supposed to appear. The sign-in assistant is supposed to be providing the credentials so the portal is displayed immediately. 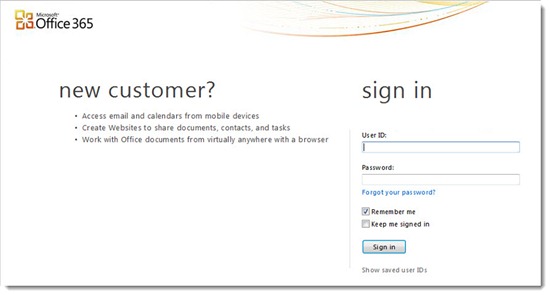 Windows 7 has an interesting Credential Manager. (Type in “credentials” in the upper right corner of Control Panel.) Vista has a rudimentary version of the same thing – look in User Accounts for “Manage Your Network Passwords.” 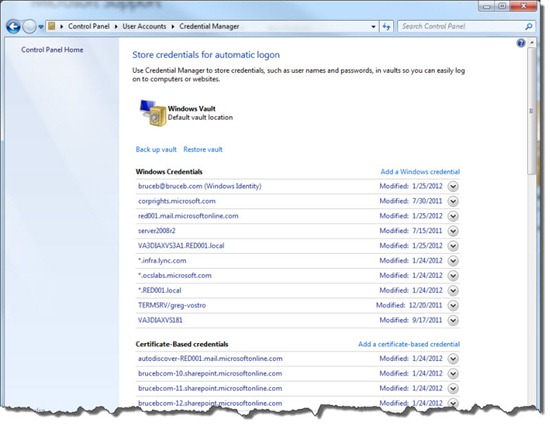 My list above has a number of names that include RED001. That’s the indicator of the old Microsoft Online Services, since my mailboxes have not yet been migrated to Office 365.

After the migration, all the references to RED001 should disappear and be replaced with servers named xxxxxxx.outlook.com, the Office 365 servers. In one case I was able to remove an old RED001 entry here and stop a persistent password prompt. In two other cases I’ve got Outlook prompting for the old RED001 server password even though the migration to Office 365 happened months ago and all local references and DNS entries have been thoroughly scrubbed.

After that, well, I’m out of ideas. If you find a fix to the pestering password problem that I haven’t mentioned, let me know!