What Happens If Windows 8 Fails? 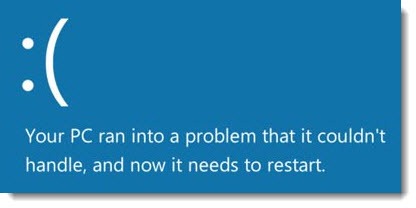 Windows will continue to be the dominant platform for enterprises and professionals but it runs the risk of becoming irrelevant – or at best, just another equal but decreasingly important option – for a generation growing up with no particular loyalty to it. Enterprises have already had to accept the nearly instantaneous explosion of tablets and smartphones that are way outside their normal security comfort zone, and anyone outside of an office already has a tenuous relationship to Windows at best.

Windows 8 will be the reinvention of the entire concept, a bold move being led by smart people. Many people who have spent some time with the Metro UI praise it highly.

Windows 7 is polished and stable. Windows 8 will require retraining and there will likely be compatibility problems, and users may not see any strong advantages in Windows 8 for desktop and notebook users. (In fact the UI changes may be seen as a large detriment compared to the familiar Windows 7 environment.) Windows tablets may land with a thud in the market alongside the currently dormant Windows phones. Enterprises may stay far away from Windows 8 upgrades and cling to their Windows 7 desktops for as long as possible, just as they did with Windows XP.

There is no shortage of industry analysts convinced that Windows 8 will fail. The blogosphere is filled with speculation.

Paul Thurrott wrote his thoughts about what the effect would be on the tech industry if Windows 8 does not succeed. I encourage you to read his entire article; these are the key points. It’s sobering and a bit depressing, because I can so easily imagine that things might unfold this way.

“Let’s say Windows 8 flops with consumers on tablets. Yes, many still buy traditional PCs, because that’s what they know. Businesses still buy Windows PCs, too, for similar reasons and because they are highly manageable and compatible. But the market for traditional PCs will eventually slow, flat-line, and then decline. And the market for non-traditional computing devices, such as tablets and smartphones, will continue skyrocketing. At some point, PCs run the risk of becoming the bottom of the market, not just in revenues, but in sales. Most people will engage in computing activities on other types of devices.

“. . . In [that] scenario, chain reactions ensue. Microsoft gets locked out of this future market for computing, at least from a platforms perspective. And that means the company stops growing as it controls an ever-shrinking part of the market. Further, the company would have to change yet again, and there are only two obvious paths: It can choose to serve the business market only, or it can return to its roots as an applications maker and target all of the major mobile platforms – primarily Android and iOS – with its most popular applications and services (e.g., Office).

“. . . I see Windows 8 as Microsoft’s Hail Mary pass. If Windows 8 doesn’t truly succeed (i.e., it achieves just Vista-level sales and customer engagement), the company might never fully recover. The failure of Windows Vista already knocked the stuffing out of Microsoft, leading to the complete upheaval of the Windows Division, and here they are making a big bet again, far earlier than I ever thought was possible. What if this one doesn’t work? What if users don’t embrace this weird dual-usage model with both tablet-friendly and traditional UIs? What if the world just passes them by?

“. . . IT pros should be worried too, because this won’t affect only the consumer market. In businesses, I see nothing but fear in the face of cloud computing, because many of these hosted services are in the process of permanently reworking the mix of jobs that are available within companies all around the world. But the changes wrought by cloud computing will seem like the good old days if Microsoft falls apart and its familiar software and services, and all the manageability that comes with it, go by the wayside.”