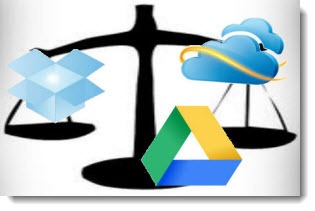 This is not an exhaustive list, just a few things that stand out about the cloud syncing services in their current forms. None of these is a reason to choose one or the other service, they’re just interesting things to know.

SPEED Dropbox has become tremendously popular because of its speed and reliability. When you modify a file on your laptop, the changes are synced to your desktop computer in the time that it takes you to push your chair in front of the other keyboard. Dropbox uses very smart technology to sync folders with an absolute minimum of data being transmitted back and forth.

HIGHER PRICE At the moment, Google Drive and Skydrive are cheaper if you want to purchase large amounts of storage space. I expect those price differences to even out quickly. Dropbox is likely to adjust its pricing, perhaps in the next few days.

NO ONLINE EDITING Long-term, the key differentiator is likely to be that Dropbox does not let you open files directly into Google Docs or Microsoft Office Web Apps. Neither of those is currently used heavily but I expect them to become better known and more useful; if Dropbox is cut off from them, it will be a real disadvantage. I’m hoping a solution will be cooked up by Dropbox or a third-party developer.

NO DELTA UPLOADS I saw an unconfirmed report of a technical shortcoming in Google Drive: reportedly it is remarkably inefficient about using your bandwidth to upload and download data.

Dropbox uploads and downloads only the changed bits in a file – “delta” uploads, if I understand the vocabulary. If you change a few words in a Word file, Dropbox does not upload the entire file, just a few bits of data that cover the changes.

When you’re working with big files, that potentially leads to delays in the syncing process. It’s also just ugly from a technical perspective.

NO RIGHT-CLICK SHARING Google Drive and Skydrive also have one shortcoming compared to Dropbox in the process of sharing files. You can right click on a file or folder in the Dropbox folder on your computer and get a link to share with anyone with a single click. (Dropbox just enhanced its sharing features a few days ago, making it even easier to use the service for sharing files.)

Neither Google Drive nor Skydrive offer any right-click menu on files or folders – not for sharing, not for anything else. Sharing can only be done using fairly clumsy controls on each website.

NO SELECTIVE SYNC The big shortcoming of Skydrive only affects people storing very large amounts of data in it: there is no way to do a selective sync on a computer so that only certain folders are synced. When Skydrive is installed on a Windows or Mac computer, the entire contents of the Skydrive folders are always copied to the computer. That may not be what you want if you’re using the service for large photo, music or video collections and you want to add Skydrive to a notebook with a small hard drive.

NO DELETED ITEM RECOVERY A more interesting shortcoming is that Skydrive currently offers no recovery of deleted items. When a file is deleted, it’s just gone. When you delete a file from the Skydrive folder on your computer, the file goes in the Recycle Bin, so frequently that won’t be a terrible problem. But it’s an odd omission; being able to recover deleted files for 30 days is basic and easy to implement.

FETCH FILES FROM OTHER FOLDERS Skydrive does, however,have one interesting feature that the other services don’t offer. You can reach through it to the file system of another computer connected to your Skydrive account and download any file from that computer, no matter where it’s located, as long as the other computer is turned on. 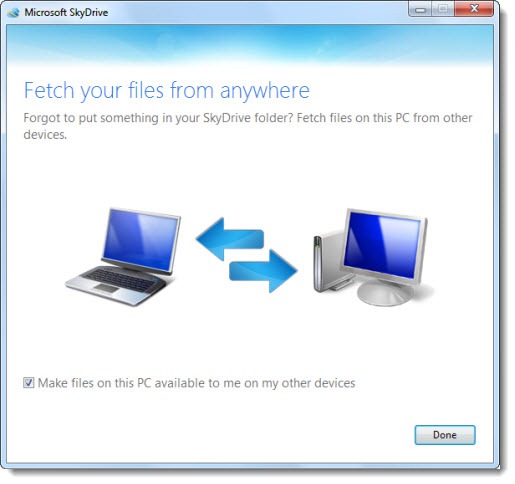 The “fetch” feature requires authentication for security – you can’t reach into the remote computer unless you tap in a code transmitted by email or text message. (That might only be required once for each computer. I haven’t tested to see if network drives can be accessed this way.)

These are all things that might be changed as these services evolve in the next few months. They are the kind of quirks that come along with any new technology – any of them might be important to you as you begin to use the service but it’s hard to predict that and discover missing features ahead of time. Good luck!