Amazon is a diverse company. Its financial reports do not break down its revenues into detailed categories but it’s obvious that it has a vast retailing presence in media, electronics, and general merchandise; and it sells a lot of Kindles, including Kindle Fires that arguably make Amazon one of the more successful competitors against Apple in the tablet market.

There’s another category on its quarterly reports labeled “Other” which hides Amazon Web Services, one of Amazon’s most interesting ventures.

Amazon has built a global network of servers that are highly reliable, massively redundant, and very secure. It makes them available to developers very inexpensively as a cloud computing platform. Amazon has stayed ahead of Google and Microsoft in making cloud servers and cloud storage available to all.

You won’t recognize most of the services offered through AWS but you’ll get an idea of the scope of the operation by looking at Wikipedia’s list of AWS products. 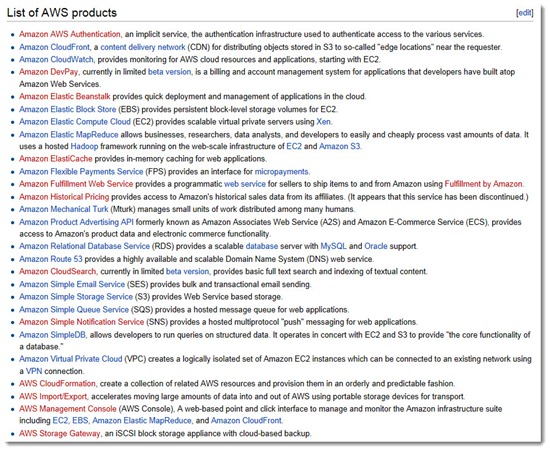 One of those products, Amazon Simple Storage Service (S3), has gotten much of the attention so far. Basically developers can write a program that stores files in the cloud and use Amazon S3 as the storage space with confidence that the storage will be safe and cheap.

When you use Dropbox, your files are stored on Amazon S3 servers. Amazon S3 is used to store data for Tumblr and Posterous. Backup programs are being built to store backups in Amazon S3. It’s far cheaper and more effective for a growing company to use S3 to hold your files instead of building its own global server network.

Another AWS service, Amazon Elastic Compute Cloud (EC2) provides something that network administrators are still getting their heads around. Basically it allows anyone from an individual to a Fortune 500 company to spin up a virtual server and operate it for a limited time for a specific project, or operate it continuously to run line-of-business programs. Either way, it costs almost nothing.

Last month Amazon made the experience even more friendly with the introduction of the AWS Marketplace, where a variety of business applications can be discovered and deployed with a minimum of expense and difficulty. From GigaOM:

“Nearly every company needs to run document management systems, CRMs, wikis, bug trackers, project management tools and other web-based software. Server applications tend to be tricky to setup and require a non-trivial amount of sys-admin knowledge to run and maintain. The AWS Marketplace encapsulates all that complexity and allows end users to discover, purchase and deploy complete server applications with one click. . . . This significantly lowers the barrier of adoption of cloud computing at the departmental level, making it easier for business units to bypass traditional IT. Why wait weeks to have a server delivered and setup when you can get pretty much the same result by whipping out your credit card and paying $50 a month for a small instance running the app you need now?”

AWS continues to be aimed primarily at enterprise IT departments, IT pros and developers. As an end user or businessperson you’re not going to go lightly over to the AWS Marketplace and spin up a project management system or SQL database. It’s a big and complex platform.

For IT departments, IT pros and developers, though, it changes everything to have so many hard things done automatically, preconfigured, cheap. As more people become familiar with the Amazon tools, it will likely grow exponentially. Microsoft, Google, Rackspace, and others are competing with Amazon to build out their own global networks and offer the same kind of services but Amazon is a rather large step ahead. Amazon may win the loyalty of application vendors, who do not always have the resources to develop for many different platforms; and Amazon may deliver the most customers if its marketplace begins to be widely used by businesses. 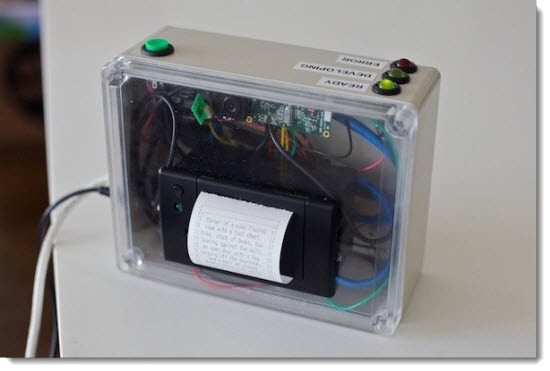 One recent report highlighted the unbelievable variety of things that creative people can do with the AWS platform. One of the AWS services is named “Amazon Mechanical Turk.” Programmers can send requests through Mechanical Turk to human beings who receive a small payment for completing a task that a computer cannot do. There are people around the world who have signed up to get micropayments for quick decisions – choosing the best photograph of a storefront, writing a product description, or identifying a performer on a music CD.

Last month the “Descriptive Camera” turned up on the gadget sites, a project done for an NYU class that demonstrates some of the awesome power that can be unleashed cheaply.

The Descriptive Camera takes a picture and uploads it to Mechanical Turk.

Three minutes later, a little printer spits out a slip of paper with a prose description of what was in the picture.

That’s an awesome display of technology and outsourcing. Think it’s pointless? Look forward a few years and imagine that your camera automatically gets that kind of metadata and stores it in each image, where your camera already records shutter speed and date and time. You’d have a whole new way to search through your photos, wouldn’t you?

Watch for references to AWS. You’re likely to see it mentioned more and more frequently in the next few years.