There are two advantages to Office Web Apps that set them ahead of Google’s similar web apps for most businesspeople.

The formatting is crucial. If you upload a file that includes formatting that is not supported by Office Web Apps, you might not be able to see that formatting or edit it online, but it will still be there when you finish editing online and bring the document back to your desktop. Microsoft calls it “round-tripping” and has worked extremely hard to make sure document formatting is 100% preserved when a document passes through Office Web Apps.

Anyone who has used Google Docs with an Office document understands why this is important, because Google Docs will almost certainly mangle Office formatted documents beyond repair. It doesn’t even try. Honestly, it’s like a point of pride among Google aficionados that they scorn Office formatting. It’s an important part of the reason that “Google Cloud Connect for Microsoft Office” never caught on.

So when I show you a couple of examples of shortcomings in the Word Web App, understand that I do it with kindness. Office Web Apps are valuable tools that we all may begin to use regularly. The weaknesses, though, do offer a chance to be snarky and it’s hard to pass up.

When you click on a document in Skydrive, it opens in View mode. It is a static view of the document or spreadsheet or presentation. In my experience, the view is very accurate. All formatting is presented with high fidelity to the original.

There are two editing choices. The first tab lets you edit the file in its native Office program on your computer, if you have Office installed. When you’re done you can save it directly back to Skydrive.

The second tab lets you edit it in your browser – the heart of the “Office Web Apps” experience. The editing tools are limited. Microsoft describes it as “light editing.” There’s a lot you can’t do in the Office Web Apps. When the file opens in the web app, it conceals anything in the document that the web app is not capable of editing.

When I was testing the Skydrive client a couple of weeks ago, I grabbed some files at random to upload. The first one I chose to open was a mockup of a flyer that I had started for Bruceb Cloud Backup.

The view on the left is the way it looks in the “View” pane of Word Web App.

The view on the right is the way it looks in the “Edit In Browser” pane of Word Web App. 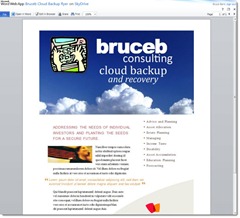 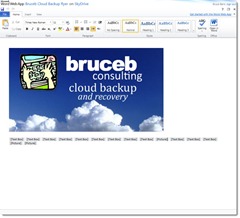 Okay, that’s an extreme example. It’s not fair. That’s a highly formatted flyer and the web app is not well suited for working with it. I can accept that.

Visually, though, the next document I opened showed that editing in the web app is much less close to WYSIWYG than I expected. It’s a template I use for recording information about my clients. Again, the left accurately shows the document in View mode and the right shows how it gets simplified for Edit mode. 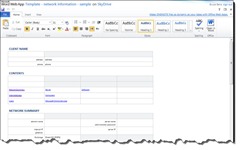 It’s editable online but a lot of formatting is missing from the editing pane.

It’s important to reiterate that the formatting has not been lost! If I edited the documents online and then returned them to my desk, the original formatting would return in all its glory. It’s only the onscreen display in the editor that is deficient.

At the moment you should focus on the word “light” in “light editing” with Office Web Apps. They may become more full-featured but progress has been slow in the two years since they’ve been introduced. That doesn’t make them a poor choice now as long as you go into them with reasonable expectations.