How To Identify An Ivy Bridge Processor

The market for Windows notebooks has begun its transition to new models built on Intel’s Ivy Bridge processors. New products are appearing daily and older models are being upgraded or replaced. Since shopping is a little confusing right now, I’ll try to give you the short course about what you’re looking for.

WHY YOU WANT IVY BRIDGE

If you’re buying a new notebook, you want the Ivy Bridge chipset. It is more powerful than the previous generation of Sandy Bridge processors but that’s not very important – you don’t use more than a tiny fraction of the power in any of these processors. These are the four things that are important about Ivy Bridge in a notebook:

There’s nothing wrong with the previous generation of processors. If you can get a sweet deal as the manufacturers clear their shelves to make room for Ivy Bridge notebooks, you might want to do that. But make no mistake, this is a complete turnover of the market. You’ll be buying last year’s model to save a buck. That’s never been a very good strategy in this industry.

HOW TO IDENTIFY IVY BRIDGE

Intel’s naming schemes have always been opaque. The ads won’t say “Ivy Bridge.” Until the market is completely refreshed, you’ll have to do a bit of detective work to tell which models have the new processors.

Example: this is Dell’s small business Ultrabook page today. (It will be different tomorrow. Models and features are being updated constantly.) 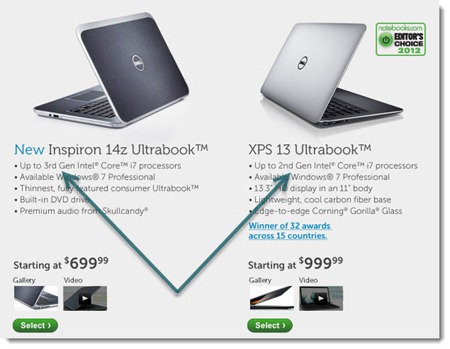 You can see on the Dell page that the Inspiron 14z Ultrabook has been upgraded to Ivy Bridge – “3rd Gen Intel Core i7 processors”. (The Inspiron 14z is a very appealing Ultrabook! One of my current favorites.) The XPS 13 Ultrabook has not yet been refreshed with the new processors. It’s also quite a nice notebook but I’d suggest waiting to buy one until the updated model is available – expected any time but no confirmed date yet.

Now look at the processor numbers in the landing page for the Inspiron 14z notebooks.

The next model up has the Intel Core i5-3317u processor. That’s an Ivy Bridge processor.

(Confusing footnote: the naming scheme only works up to 37xx. The 38xx and 39xx processors are Sandy Bridge. That’s because Intel hates consumers.)

The notebook market is a blur right now. If you want to buy something this week, look at the Dell Inspiron 14z and the Lenovo IdeaPad U410. There are many more Ivy Bridge notebooks already available and lots more in the pipeline. Happy shopping!