The Evolution Of Skydrive

Microsoft’s vision for Skydrive is starting to come into focus. Microsoft is integrating Skydrive deeply into its entire ecosystem, across its entire product line, until it will seem obvious and inevitable. You might not need to rush but the chances are that you’ll be using Skydrive before long.

Skydrive started as a place to store files online that you would primarily access through a web browser. It was not well designed or widely used – difficult to figure out, littered with advertisements, and inflexible.

The fundamental change came in April, when Microsoft released a Skydrive app for Windows PCs that makes Skydrive work like Dropbox. It creates a special folder on your computer; anything in that folder is synced online, and from there it is synced to any other computers or devices running a Skydrive app linked to your account. You work with your files on your own computer, treating the folder like any other folder, but with confidence that you’ll have access to your work and your changes from anywhere.

In the middle of July, the Skydrive for Windows app was updated for better performance and reliability and gained a couple of nice small additions, notably a status window to make it easier to monitor what it’s doing.

At that point Skydrive was still nothing more than an interesting alternative to Dropbox – more space for free than Dropbox (and cheaper paid plans), and still missing a few features.

The sign of true commitment came on July 20, when the Office team displayed Office 2013, due early next year, and revealed that your Skydrive folder will be the default location for opening and saving files in Office 2013 programs. It will serve the same purpose as your Documents folder today -  you won’t think about it, it will just be the place where everything goes. 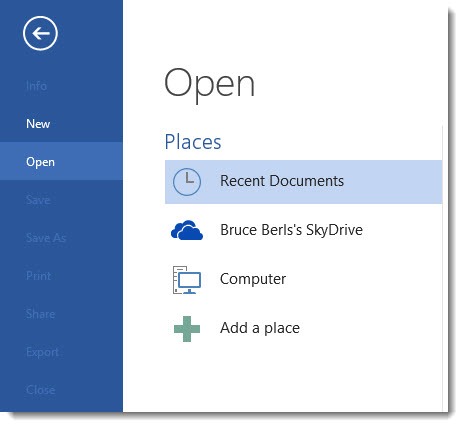 The difference is that the files stored in Skydrive won’t be left behind when you move from one computer to another. You’ll see the same files on your office PC, your notebook and your home PC. It will be the default location for documents on your Windows 8 tablet or Windows 8 Phone, and apps will be available (like Dropbox) to reach the same documents on iPads, iPhones and Android devices as well. Microsoft has informally confirmed that Office 2011 for Macs will be updated so it can easily open and save files to Skydrive as well.

Sharing features are being added to Skydrive, closing one of the gaps that set Dropbox apart, and file versioning and recovery of deleted files are being addressed. Microsoft is also working on two other things to make Skydrive more compelling.

The first is a series of improvements to Office Web Apps, the online versions of Word/Excel/Powerpoint that can be opened from your Skydrive folder in a web browser. The online apps will never be identical to the installed Office programs on your computer but important features are being added to make them eminently usable. They become much more irresistible when you discover that more than one person can work simultaneously in a document or spreadsheet in the web apps, adding a really interesting new tool for collaboration.

The second change to Skydrive will be a redesign of the web site to make it more attractive and more user-friendly. It’s getting a Metro-makeover to make it consistent with Microsoft’s other 2012 products and services, with tiles and white space. Screenshots of the new design have started to appear and, well, it looks marvelous.

The next round of updates to Skydrive and Office Web Apps may appear later this month. Then in October, when Windows 8 becomes widely available, Skydrive takes on even more significance. Skydrive will be used under the hood to sync your settings among your various Windows 8 computers and devices, from your wallpaper to settings in Office programs. Skydrive will be accessible everywhere on every Windows 8 device, just as easily as your Documents or Photos folders. (In fact I’m waiting to find out if Microsoft takes the next step and makes it easy to assign Skydrive to completely take over your Documents and Photos folders so the experience is truly seamless.)

Much as I love Dropbox, the takeaway is clear.

If you are interested in setting up a service to sync your files among multiple computers and you’re not already committed to Dropbox, take a look at Skydrive.

And if you’re a Dropbox user – take a look at Skydrive. You may feel the desire to switch sooner than you think.