Amazon unveiled an array of new Kindles at its press conference today, from a $69 basic Kindle (a reduced price on last year’s model), all the way up to a high end tablet that tops out at $599.

The details are interesting but the big picture is even better. Amazon has updated last year’s Kindle Fire to the point that the Kindle Fire HD is effectively a brand new device – a full-fledged tablet that can stand toe to toe with the iPad at a fraction of the cost. Amazon’s ecosystem has grown fast and offers more than enough for the people who are not yet completely enclosed in Apple’s walled garden. 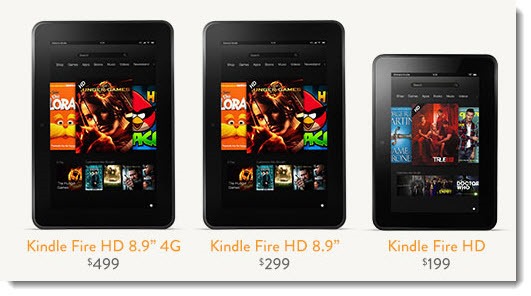 The Kindle Fire HD has the same 7” screen as last year’s Kindle Fire but it has been reworked from top to bottom with a high resolution screen, Dolby audio with dual speakers (!), and improvements to the speed and responsiveness of everything from turning pages to Internet browsing.

The real head turner is the new larger model with an 8.9” screen, which has specs to rival the iPad – high resolution that rivals Apple’s lauded “Retina” display plus processor power to go with it. The price points reflect different amounts of storage (16Gb, 32Gb, 64Gb) and the inclusion of 4G LTE wireless on the most expensive models. There are more details on the prices and features here.

Just as important, Amazon has improved the tablet interface that surrounds its ecosystem of movies, music, books, magazines, games, cloud storage, and apps. Apple’s app store offers an unparalleled depth of apps, hundreds of thousands of them, but there is a huge audience that doesn’t want Apple’s icon bloat and will be happy with fewer apps if they are well chosen.

Perhaps most important, though, is that the Kindle Fire HD models are almost half of the cost of comparable iPads. (And Amazon adds a heavily discounted AT&T 4G plan if you buy the Kindle Fire HD with 4G, making the price difference even more dramatic.) Any way you run the numbers, Amazon is calling attention dramatically to the premium that has been paid by iPad users for the last couple of years for the privilege of having that Apple logo.

The Kindle Fire HD reshapes one corner of the tablet market, which Apple has had to itself until recently. The market for Android tablets has been very slow to develop and even the latest models are uncompelling. The Kindle Fire HD is built on Android but Amazon has wrapped it so thoroughly with its own ecosystem that the Android underpinnings are barely visible.

Another corner of the tablet market will be eaten away by Windows 8 tablets, which will be priced comparably to iPads but which will have features for businesspeople and power users that Apple will not match.

That leaves the iPad standing strong but no longer alone, and perhaps surrendering more of the market to Amazon and Microsoft than people suspect.

The new Kindle Paperwhite ebook reader is set to make its own impact. Amazon has taken the traditional Kindle and beefed it up with a higher resolution screen, allowing text to be far crisper and sharper than before. Even better, Amazon has embedded a light in the screen for reading at night or in low-light conditions, and done it in a way that is reportedly far better designed than the light in Barnes & Noble’s Nook. The light in the Kindle Paperwhite is evenly distributed across the page and points down at the page instead of out at your eyes, making it easier to use for extended periods. Somehow this was done without compromising battery life; Amazon claims that the battery will last for eight weeks in normal use with the light on all the time while you’re reading. There are more details and pictures of the Paperwhite here.

The pricing of the Kindle Paperwhite ($119, or $179 to include a 3G connection for downloading books that works globally) are for models that will display modest ads when you’re not reading. Add another $20 to have the “special offers” removed.

There is some very favorable feedback from reviewers that got a good look at the new screen.

I’m a reader. I can understand the appeal of a device that only does one thing but does it very well. As my Kindle library grows, I’m thinking about getting a Kindle Paperwhite. Reading a Kindle book on an iPad is fine but this looks just right.

The Kindle Paperwhite devices will start shipping on October 1. If you’re a reader, think about whether this might be just right for you too.