New From Apple: The Nice But Underwhelming iPhone 5 (And An iCloud Outage)

Apple dominates the news today but perhaps not the way it was hoping: an underwhelming introduction of the iPhone 5 at the press conference yesterday, and some dissatisfaction about an extended outage of iCloud mail.

First, the good news: the iPhone 5 is the best iPhone yet. It’s also kind of dull.

When Apple introduced the iPhone 4 in 2010, it raised the bar for smartphones to a whole new level and forced the industry to redouble its efforts to create competitive products. They sold tens of millions of them.

In 2011 Apple changed the name to “iPhone 4S” and released the iPhone 4 with some modest improvements, things that were bigger or faster or more shiny or less thick, along with some incrementally improved apps and features. They sold tens of millions of them.

In 2012 Apple is changing the name to “iPhone 5” and will release the iPhone 4 with some modest improvements, things that are bigger or faster or more shiny or less thick, along with some incrementally improved apps and features. They will sell even more tens of millions of them.

The iPhone 5 looks like a lovely phone. Many people got an iPhone 4, then skipped the 4S while they waited out their 2-year contract with AT&T. They’re all going to upgrade to the iPhone 5. Anyone who has become invested in the Apple ecosystem (and that is oh so many people) will at least consider getting an iPhone 5. 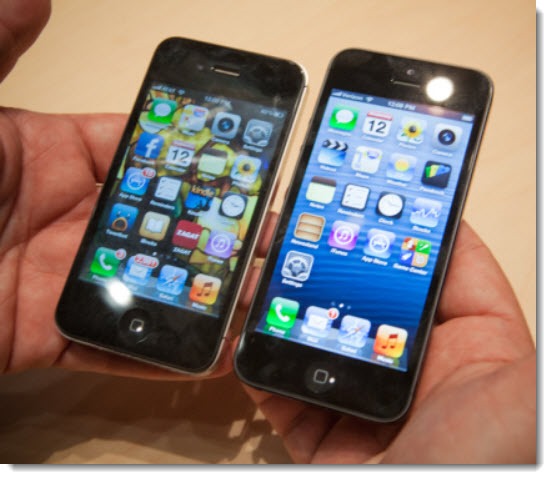 All the improvements are good: taller screen (a bit), 4G LTE speeds, a modestly improved camera, a thinner profile, less weight without compromising battery life. Great! Not a bit exciting, but, well, good for them.

In a twist, though, Apple finds itself catching up to the best phones from the other manufacturers, instead of blazing the trail. The Samsung Galaxy S3 and Nokia’s upcoming Lumia 920 meet or exceed every one of the specs and have their own outstanding features – hopes are high that the Lumia 920 will have a camera that far outclasses the iPhone or any other phone, for example.

Apple opted not to take the lead in other areas and left out some hoped-for features. Apple did not include NFC, for example, just when it is emerging as a new standard for micropayments. Before long you can expect to see a customer with an Android phone approach the counter at a coffee house, be greeted by name, and pay with a wave of the phone. The iPhone users won’t be part of that. The Lumia 920 will have a wireless charger – set the phone down, it will charge without any fumbling for the connector. Apple dismisses the idea.

The iPhone may have hit that sweet spot where big shakeups are increasingly unlikely. Once a large block of consumers hits a comfort point, changes cannot be made lightly. Apple might still be a market-changing revolutionary in the future but it’s more likely to happen in a different area (the living room, perhaps), not the entrenched world of iPhones and iPads. Perhaps the revolutionary days are behind it – Apple can dominate for years with nothing but iterations of its current products.

If you use your phone for business, don’t rush out to the Apple store on the first day. Take a long look at the plans for Windows Phone 8 devices, arriving in November. They represent the real innovation in the phone market in 2012 and many of their best features are aimed at businesses.

Outages happen. It was particularly poor timing for Apple when its iCloud mail service went down the day before the iPhone press conference and stayed down for two long days.

The first reports of downed mail began to appear on Monday, September 10 and by Tuesday morning complaints about the outage were widespread. Apple posted a status message on Tuesday morning – “Mail may be slow or unavailable. When Mail is available, users may experience delays with incoming messages.” The Apple forums filled up with messages from frustrated users. By Wednesday it had spilled into the tech press – for example here and here. By Wednesday night Apple was declaring that the mail system was back up but it was still struggling to deliver the backlog of accumulated messages.

This is a particularly long and embarrassing outage. All of the cloud services will have hiccups as they get built out but two days is a long time to stay down. Apple has said nothing about the cause of the outage.

Each status report defensively noted that the outage only affected 1.1% of iCloud users. We don’t know exactly how to interpret that but it’s worth noting that in July Apple’s CFO announced that Apple had 150 million iCloud users. If this outage affected 1.1% of those users, that’s 1,650,000 people who had their Apple mail go down for two days. That’s not a good reflection on Apple’s ability to run enterprise-level services.