The Road To Windows 8

Taken together, the releases represent the most significant change in business and consumer technology since Windows XP arrived eleven years ago. Apple’s mobile devices have changed the world for consumers but Microsoft’s vision is broader and might even have a greater impact in the long run.

Microsoft is engaged in remaking itself on a scale that is rarely attempted by large companies. If it succeeds it will maintain its place on a playing field that increasingly appeared to be limited to Apple and Google and perhaps Amazon. We will be using computers running Windows for many years but the shift to handheld devices is profound and Microsoft was in danger of being left out of it. This is the bet-the-company attempt to avoid turning into IBM, successful and rich but no longer important to anyone outside of enterprises. (And make no mistake – Microsoft’s attempt at a makeover might fail, brought down by poor execution and torrential criticism, and send it down that road, not irrelevant but increasingly ignored.)

Over the next few weeks I will be writing extensively about Windows 8. I’ve been using it exclusively on my computers for months and I have some ideas of what it will take for you to understand it, how I can help make it easier for you to get started, and who should ignore it and stick with Windows 7. I’ll have tips and tricks for you to file away for the day when you get your first Windows 8 computer. I’ll give you some advice about whether to upgrade your computer. I’ll give you some perspective on why you’ll see so many reports by people who just hate it with a white-hot fury. (Or so they’ll say. There might be some other agendas at work.)

Over the next few days we’ll start with a view of Windows 8 from 36,000 feet, the very big picture. 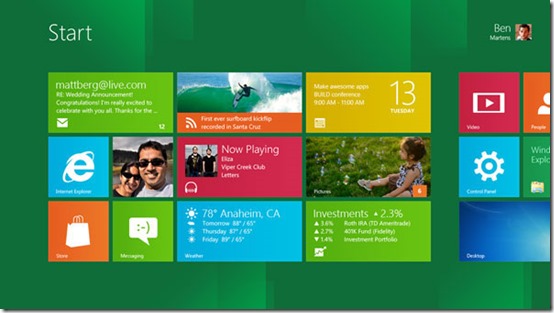 Let’s see if I can answer your first question before we get to any of the details.

Should you buy Windows 8 the minute it comes out?

Okay, is that clear? Stand down. Nobody should be getting worked up blindly. This is a time for paying attention. By the time it arrives, you’ll know if you’re the kind of person who is excited enough to step up right away.

Now let’s look at the nuances, because I said “no” mostly to make you feel better. Actually it’s possible that some of you should be lined up outside the (virtual) stores on October 26.

When you buy a computer after October 26, you will likely have a choice between Windows 8 and Windows 7. Some (but not all) of you should choose Windows 8. Many businesses, especially enterprises, will choose Windows 7 for continuity and compatibility. A fair number of people will skip Windows 8 completely. In any case, most desktop computer users will use Windows 8 in a way that emphasizes its similarity to Windows 7.

There will be dozens of new notebooks and hybrids on the market in November with new features – redesigned keyboards and touchscreens and innovative form factors. If you’re in the market for a notebook, wait until November.

There are compelling improvements in Windows 8 for notebooks – some of you may want to replace an existing notebook sooner rather than later to take advantage of Windows 8 as well as the hardware changes that have made notebooks lighter, thinner and faster with longer battery life.

Nonetheless, just as with desktops, many people will want Windows 7 on their new notebooks for familiarity.

Microsoft will be selling the Surface tablet, similar in size and concept to an iPad. Lenovo and other manufacturers will have similar tablets – ten inch screens, light, long battery life.

The Windows 8 tablets deserve special attention! They are designed for touch, just like an iPad, but almost all of them will include a lightweight keyboard, making them better suited for doing real work. All of the Windows 8 tablets will have a desktop that resembles the Windows 7 desktop slightly modified for touch, and they will either include Microsoft Office or they will be capable of running Office programs.

Windows Phone 8 phones will be available from all the carriers starting in November. They will have the same interface as Windows 8 on computers and tablets, an interface that works particularly well on a small device.

If you get a Windows 8 tablet or phone, you will be much more interested in getting a Windows 8 desktop or notebook, because your experience will flow from one to the other seamlessly. The interface, your documents, your Internet favorites, your wallpaper and so much more will be the same on all your devices. Microsoft is creating a walled garden to rival Apple and Google and your experience will be better if you stay within the garden.

Technology is arriving at a dizzying pace. You’re feeling overwhelmed. Clear your mind, take a few deep breaths, and follow along with me as we start down the road that leads to Windows 8. You’ll arrive relaxed and in a better position to make some informed decisions about how it affects you.