If you have a new Android phone running the latest version of Android (“Jelly Bean,” Android versions 4.1 or 4.2), you can turn on Google Now, one of the most interesting and forward-looking smartphone apps available on any platform.

I don’t have a Jelly Bean phone, so I’m relying on news reports, blogs, and comments by knowledgeable tech journalists. My impression is that Google Now is useful but still limited and unpolished. That’s okay. You can still learn quite a lot from it about how companies hope to keep you in their ecosystems and what data mining might do for you in the future.

Let’s take a couple of examples. 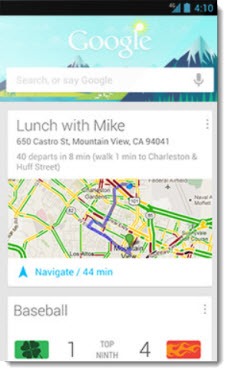 A card appears alerting you that you have to leave now to be in time for your next appointment, based on traffic conditions between where you are now and where you’re going. There’s a button for navigation with Google Maps.

Sports scores pop up for the teams that you follow (and not for teams you’re not interested in).

Search for flight info on your computer and Google Now will be waiting with information about the status of the flight, kept up to date.

Traffic and travel time automatically appear whenever you’re likely to be heading to work or another regular destination.

When you approach a bus station or train station, you’ll get information about the status of buses and trains arriving and leaving soon.

There are more functions already built into Google Now – restaurants, package tracking, hotel reservations, movies and concerts, stocks – and the architecture allows Google to add much more in the future. An update in December added displays of airline boarding passes found in email, weather at travel destinations, birthday reminders, and monthly summaries of biking and walking. You can ask questions of Google Now, like Siri, and Google is improving that as well: you can create calendar events by voice, ask Google Now to recognize songs that are playing, and post to Google+ by voice.

Google Now learns from your patterns over time and is intended to become almost psychic in its ability to predict what might be helpful.

DRAWING YOU INTO A STICKY ECOSYSTEM

Much of the psychic magic only works if you are firmly committed to Google’s ecosystem. Like Microsoft and Apple, Google is developing its programs and services to sync information to all of your Google devices. Google Now appears to draw information from all of these sources:

—  Events on your Google Calendar

—  Your posts and interactions with friends on Google+

—  Your web browsing history – but only if you use Google Chrome as your browser, which syncs your web history with your phone

See how it works? Do a web search for the Oakland A’s from your computer and you’re likely to see scores on your phone the next time a game is played. Look up a restaurant on the computer and your phone will be waiting to give you directions when you get into your car that night.

Google seasons your data with everything it learns about your location from the phone’s GPS and sifts everything through algorithms to develop meanings and connections, algorithms that are constantly being refined with data from millions of people worldwide.

It’s a powerful incentive to commit wholeheartedly to the Google walled garden. Let them mine your data, forget any illusion that you have any privacy. It’s too late to worry about that, so you might as well get the advantages of letting a big company work very hard to try to predict your needs.

Google gets two things out of this.

Once you start to use Google services – Gmail, Chrome, Google Now, Google Maps – you’re much more likely to buy an Android device when you’re in the market. If you got an iPad it would be isolated from the data being fed to your phone, so you’ll naturally gravitate toward an Android tablet instead. That’s the sticky part: once you’re in the walled garden, there are advantages to staying there.

The second consideration is the one that really matters to Google. When you use Gmail and Google Calendar and Chrome and buy Android devices, you are going to see Google advertising. Google does interesting technology and offers unique services but never forget that Google is an advertising company. For all intents and purposes it is only an advertising company. Everything else it does is designed to make you look at its advertisements.

If you want more information about Google Now, there are interesting reviews and comments here and here.

If you got a new Android phone for Xmas, look for Google Now. It does not run unless you activate it. Try it and see if you have any of those odd moments when something seems to know you better than it should. An interesting world is approaching fast!