Most of you are familiar with Skype, the program that lets you make free calls to other Skype users anywhere in the world. Microsoft bought Skype at the end of 2011 and has been slowly (very, very slowly) rebuilding it and integrating Skype with its other services. Skype is going to take center stage in 2013, with features that go far beyond simple Skype-to-Skype calls.

Let’s start with a review of basic Skype features, then turn to some of the recent changes that provide a glimpse of where Skype is going.

Skype’s core function continues to be video and voice calls over an Internet connection to anyone else using Skype, from a computer running Skype software, signed into a free Skype account.

Making a call with Skype requires a microphone; video calls require a camera. Most people use Skype with a laptop that has a built-in webcam and microphone, but webcams for a desktop computer are readily available. I have a Logitech HD Pro Webcam C920, about seventy dollars, which can handle near-high definition video when the gods are smiling. Since I use Skype frequently, I got the pricey Plantronics CS50-USB wireless headset to make the experience more like a phone call; it improves the quality of my voice and allows me to hear you in an earpiece instead of hearing your voice on my computer speakers. There are many less expensive options for webcams and headsets.

Skype calls do not require huge amounts of bandwidth but your experience will be better if you have a fast Internet connection.

Most people never use Skype for anything besides Skype-to-Skype calls, but they are only the first item in a long list of features.

Calls to mobile phones and landlines

Phone calls are just a kind of data. The lines between data and voice are blurring fast. It was only a couple of years ago that you would agonize over the number of voice minutes on your cell plan, and the data plan was an afterthought. Now you obsess over the gigabytes in your data plan and the voice plan is glossed over.

As we move forward, it will become easier to make phone calls on your smartphone with Skype or a program like it, using the phone’s Internet connection. The carriers used to be reluctant to allow that but that reluctance is melting away as they rebuild their business around data and leave voice behind.

Skype has a dizzying number of ways to connect to mobile phones and landlines. Let’s pick a couple as examples.

If you have a Skype Premium account ($4.99/month), you can use Skype for unlimited calls to any number in the US and Canada.

In the past that would have been limited to calls placed from your computer. With the right equipment, that’s a good deal. Most of the time I’m using Skype when I call my clients from my desk. 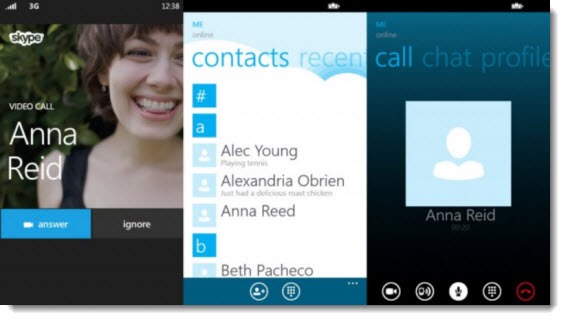 Skype has apps for iPhones, Android phones, and Windows phones. The experience of using the Skype app on a smartphone has not been seamless – typically calls could not be placed from the phone contacts list and were not allowed by the carriers to be placed over the carriers’ data networks, making it possible to use Skype on a smartphone only when it was on a local wireless network. Those restrictions are dropping away and you can expect Skype to become a dialing option that is as readily available as a call on the carrier’s voice network.

If you have a Skype Number ($2.50/month), you can set up some creative ways to handle incoming calls.

A “Skype number” is a phone number assigned to your account by Skype. It looks like any other phone number. When it is dialed, your copy of Skype answers – regardless of where you are.

Think about how that works. When you call me, your call is forwarded to my Skype number, a local (707) number. If my computer is online, Skype rings on my computer no matter where I am in the world. It’s a local call for you but it would reach me if I was in Sebastopol, Switzerland or Nicaragua.

Now think creatively. You can set up more than one Skype Number, and you can set one up as a local call anywhere in the world. If your son is in Tokyo, you can set up a phone number that is local for him. When he dials it, your copy of Skype rings. Interesting, eh?

There are more options for international calls that can save you serious money – monthly plans for unlimited calls to countries of your choice from around the world, discounted per-minute rates, and more.

Here’s another mind-bending variation. “Skype To Go” lets you place international calls to friends, family and colleagues from any phone – mobile or landline, not just from your computer – by dialing a local number. The call is handled by Skype and billed at Skype’s discount international rates. If you have a Skype subscription for that country, it will cover the call, even though you’re not using a Skype program for the call.

I know. It makes my head hurt too. If you’re spending money on international calls, it makes sense to figure it out. 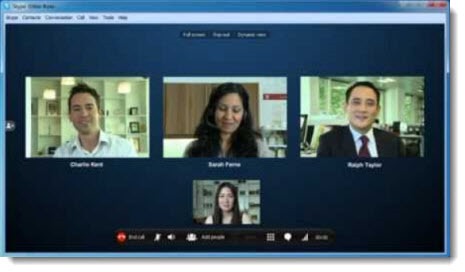 Skype supports group video, but only if at least one person in the call has a Skype Premium subscription.

One-to-one video calls are free. If you have a reason to use group video regularly, it might be enough to be worth five bucks per month. The experience is – well, it’s pretty good but quirky. Businesses might look into it for on-the-fly conferences but it’s not ready to replace high-end conference services.

Those are the familiar Skype functions that have been part of the service for the last couple of years. In the next article I’ll bring you up to date on the latest changes in Skype, which is insinuating itself deeper into Windows and Office and adding new features.