Gaming has been in the doldrums. Oh, sure, lots of people have been buying the latest installments in the war franchises (Call Of Duty, Battlefield, and others like them), but original and creative games have been few and far between.

Bioshock Infinite is a new single-player first-person game that is receiving universal acclaim. It builds a gorgeous, detailed, fascinating world, then immerses you in a story that challenges your preconceptions and twists and turns to an unexpected conclusion.

One of the problems for anyone over 30 is that new games are built for youngsters with heightened reflexes honed by hours of online gameplay. We can’t keep up. I’m exploring the Bioshock Infinite world over the shoulder of my son. I’m going to play it myself soon but I’ll be crawling through on Easy mode, trying to get as far as I can before being overwhelmed by the speed and the multitude of choices of weapons and devices.

Reviewers and players alike are rapturous. Metacritic is a site that aggregates reviews to give an overall look at the reviews of games, movies and music (similar to Rotten Tomatoes, which only covers movies). So far Metacritic has spotted forty-six Bioshock Infinite reviews – and they’re all positive, full of superlatives and hyperbole. That just doesn’t happen in the gaming world! 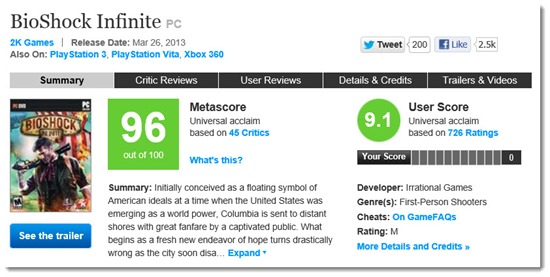 “BioShock Infinite is something extraordinary, and no one should miss it.” PC Gamer.

“BioShock Infinite is a hell of a lot of fun to play. That really should be the only quality it needs to exhibit. The fact that it holds much more feels like an advancement of an art form.” The Guardian UK.

“This world — an alternate history with a dollop of science fiction that is set in the United States of 1912 — is dense, fascinating and inventive. The combat is exhilarating. The ending manages to be both mind-bending and moving. . . . A game like this, which demands a deep and focused investment of player time and attention, is powerful evidence that narrative for people with long attention spans is thriving. You just have to know where to look.” The New York Times.

“BioShock is the most important new intellectual property of this hardware generation. Like its predecessor, it is an experience that could only ever be achieved in a videogame, one that demonstrates the true power of this medium to engage and inspire us, and in doing so it soars far above so many other games, clipped and blinkered as they are by their lowly, merely filmic aspirations. Irrational’s achievements in BioShock Infinite dignify the medium.” Gameplanet.

“Truly something to behold. A generation-defining game.” Forbes. (Forbes!)

“It’s rare to play a game with a narrative that comes together as well as BioShock Infinite‘s. It’s the kind of ending that seems inevitable in retrospect, yet hard to see coming before it is suddenly barreling toward you. Then, when it hits, it makes you look at everything you experienced beforehand a little differently, and it makes you eager to reanalyze what you thought you knew before.” Ars Technica. 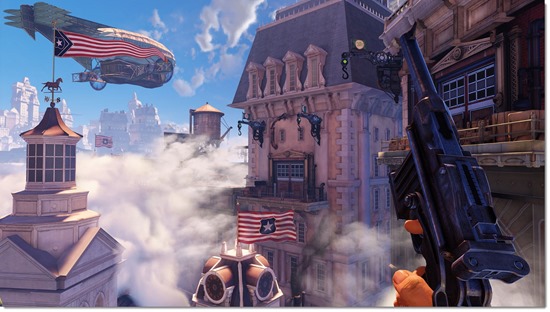 You’ll have to read a review to get a sense of the plot. A floating city in 1912, a quest to rescue a young lady, skylines to ride through the clouds, a white supremacist preacher, and a robotic George Washington with a chain gun – and much, much more. The world is beautiful but the reviewers agree that it is the storytelling that elevates Bioshock Infinite to a level above other games into a rarefied space that only a few other games have ever reached.

If your reflexes are slow and your computer is old and free time is hard to come by, you may not want to play Bioshock Infinite. In that case, just be aware of it as one of those cultural things that people will be talking about.

But if you are ever tempted by the best that computer gaming can offer – if you invested a few dozen hours in Skyrim, say, and you’ve been wishing for something to follow it – fire up Steam, get a copy of Bioshock Infinite, and walk around in the floating city of Columbia. It’s pretty remarkable.