How To Buy Microsoft Office 2013

There are three different paths to buy Office 2013. Choose your path based on whether you are:

–  a business with an existing Office 365 subscription

–  a business that is not already an Office 365 subscriber

The pricing and licenses are strongly tilted in favor of the new subscriptions. If you buy a license – preinstalled or at retail – you will pay too much for a single license that is forever tied to the machine it is installed on. It cannot be transferred to another computer. You will not get an upgrade. You don’t even get a disk in the box. You’ll be paying hundreds of dollars to “own” a license code out of a sense of misguided nostalgia.

The new subscriptions are flexible and attractively priced. Each subscription allows Office to be installed on up to five devices, and freely transferred among devices to your heart’s content. The five devices can be PCs or Macs. Later this year it is likely that the license will also cover new versions of Office for iPads and Android tablets.

Even if you start out with only a single computer, you will likely use the same license again on a notebook or second computer or tablet, at which point you will be saving money by any calculation. 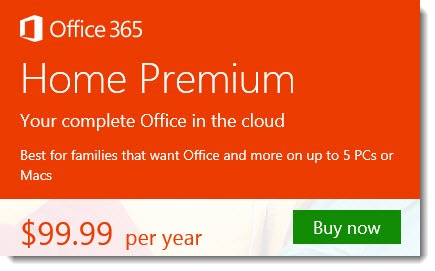 Subscribe to Office 365 Home Premium for $99/year from this page.

Businesses with an Office 365 subscription

If your business is currently using Office 365 – typically for hosted Exchange mailboxes – then ask your Office 365 administrator or Microsoft partner to set up your licenses for Office 2013.

For most plans, Office 2013 costs $144/year. The license is purchased in the Office 365 admin portal and assigned to a user. The user will then have it available in the downloads section of the Office 365 portal.

The subscription is associated with an Office 365 account (also referred to by Microsoft as an organizational account). 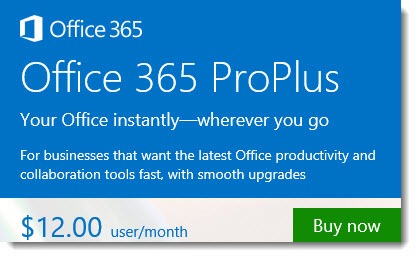 Office 2013 costs $144/year per user. You can get more information and subscribe from this page.

If you click this link to start your new subscription instead of ordering from the generic Microsoft page, I will be listed on your subscription as your Microsoft partner of record. This will make me unfathomably wealthy. Well, trivially wealthy – pocket change, really – but every bit counts.

Clicking this link is actually a meaningful choice from your perspective. I’m a Microsoft partner entitled to a higher level of support than you can get on your own, so I’ll be able to help sort out problems for you if anything requires that. I can also help in the future if you decide to use any other Office 365 services.

The subscription is associated with an Office 365 account (also referred to by Microsoft as an organizational account). You will create a new ID in the form of an email address and a password that you’ll use to log in and download the software on each device. The ID will be in the form of name@yourchoiceofname.onmicrosoft.com. Later you’ll be able to change that to your normal email address, if you choose.

It’s worth mentioning that there are Office 365 packages for business that include Office 2013 in addition to other services – Exchange, Sharepoint, Lync and more. They can be slightly cheaper than purchasing things a la carte. If you are considering a bigger move than just an Office 2013 upgrade, talk to a Microsoft partner first.

Let me know if I can answer any questions!