Here’s some late-breaking news about upgrades to Microsoft’s Office 365 service, Office 2013, and Internet Explorer 10 for Windows 7.

Existing Office 365 subscribers are being upgraded to a new version of the service, one by one during the past month and continuing for the next few months. Most of the changes are behind the scenes but the new look for the Office 365 portal (shown above) is quite striking, in line with Microsoft’s overall Metro aesthetic. Among other things, it calls out much more clearly the extensive support in the portal for setting up phones and tablets.

Outlook Web App for Office 365 – aka webmail – also has an updated look after the upgrade, and has gained so many features that it is approaching the functionality of the locally-installed traditional Outlook program. Shared calendars and contact folders can be viewed in the web app, sharing permissions can be set, and mail handling rules are fully accessible. It’s fast and sleek; Office 365 users should keep it in mind. Office 365 webmail is found at http://mail.office365.com. My clients can also get there by going to http://mail.(yourdomain).com.

Microsoft made an official announcement this week of new business plans for Office 365 subscribers. I’ll be telling you more about the details of those later. In short: there is nothing that drastically changes the value provided by Office 365, and no big changes in price or features for existing subscribers.

(Confused? I don’t blame you. Reading about this will make your head spin. If you’re curious about whether any of this applies to you, give me a call.)

Office 2013 installs using Microsoft’s new Click To Go technology, which allows programs to be used very quickly after the installation starts. The installation continues in the background and eventually the entire suite is installed. When Office 2013 is installed from an Office 365 subscription, it includes Publisher and Access in addition to the programs you expect (Word / Excel / Outlook / Powerpoint / OneNote).

One interesting point that I have to nail down: it appears that the Office 2013 install does not automatically remove the prior version of Office. Most people want that older version taken away. It’s an option in the custom installation that we’ll want to watch for. 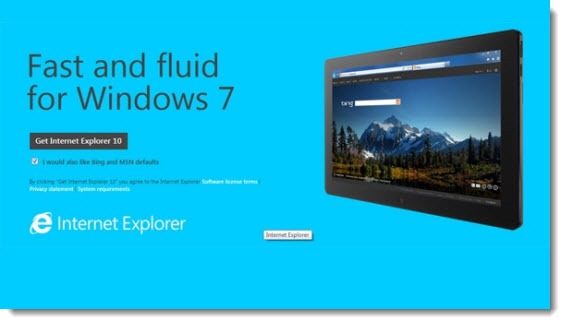 An updated version of Internet Explorer is available for Windows 7. At the moment you can install it manually from this site, but at some point it will be added to the Automatic Updates system and delivered to all Windows 7 users.

Don’t get worked up. You’re welcome to install it if you’re curious but you’re in no rush. There are virtually no changes to the look of Internet Explorer at all. All the buttons are left in the same place for a change. The changes are all under the hood – IE 10 is faster than IE 9 and has increased support for HTML 5 and other web standards. The IE developers wrote a blog post describing the improvements in web standards compatibility here. There are a few new features but nothing earth-shaking – an integrated spell-checker for blog posts and Facebook status updates, a few more things like that.

Internet Explorer 10 for Windows 7 is essentially identical to the version of IE included with Windows 8 and Windows RT. In yet another indication of Microsoft’s intent to deep-six all memories of Vista, the new version of IE cannot be installed on Vista or Windows XP.