If you are a Comcast Internet subscriber, you may be able to take advantage of Comcast’s rollout of free WiFi access from thousands of wireless hotspots around northern California. 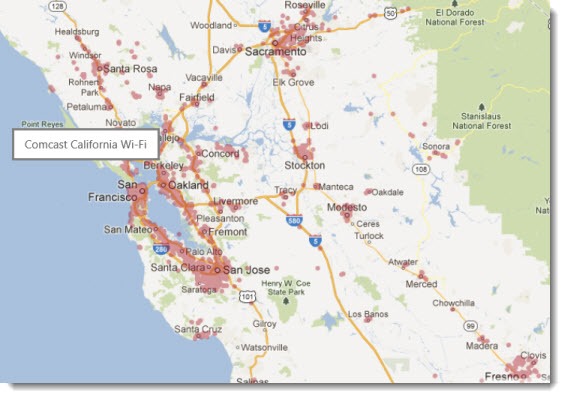 The hotspots broadcast the name Xfinity WiFi. Wireless access points have already been widely deployed around the Bay Area as well as areas in central California and around Sacramento. Comcast claims to be adding more locations all the time.

In Sonoma County there are 30 or more hotspots around Sebastopol (up from a dozen in September) and what appears to be a couple of hundred scattered around Santa Rosa. There is dense coverage from San Francisco to San Jose on both sides of the bay. You can search for hotspots on the Comcast map here. 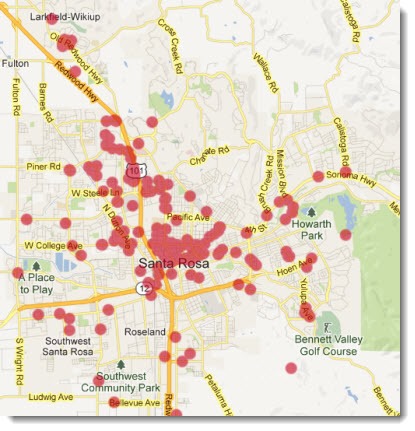 If you are a Comcast residential or business Internet subscriber, you have a Comcast ID and password, whether you realize it or not. You’ll have to figure that out to take advantage of the free wireless.

There is an interesting twist that makes the service even easier to use. The first time you connect to Xfinity WiFi from your notebook, tablet or phone, you’ll be taken over to a webpage and asked for your Comcast ID and password. When you supply those and accept the terms and conditions, you’ll be connected to a speedy Wi-Fi connection.

Behind the scenes, Comcast has recorded a bit of information about your device – probably the MAC address of the network adapter, which is unique for every single network adapter in every single device. Comcast now remembers that device and will never again prompt for credentials to join an Xfinity WiFi network from that device. If you pop open your laptop in a different location and an Xfinity WiFi hotspot is nearby, you’ll be connected. Period. No muss, no fuss. It’s been happening to me with more and more regularity in the last couple of months.

Comcast has an FAQ that answers many of the basic questions. The California rollout is relatively recent, apparently starting last fall.

There have been dreams of free wireless for many years. (At one time Sonic.net intended to deliver free wireless, first to Sonoma County and then as far as it could, but it abandoned those plans last year.) This isn’t free but it’s an unexpected gift for people who pay large bills to Comcast every month.

Get your Comcast credentials straightened out and then start looking for Xfinity WiFi as you move around. You might be pleasantly surprised to be more connected than you expected.