Windows 8 Tip: Bring Back The Start Menu With Start8

Missing the Start button on your new Windows 8 computer? It’s easy to get it back with Start8 from Stardock Software.

Microsoft made a bold (and perhaps misguided) decision to insist that everyone use the new Windows 8 Start screen to start programs. Sure, there’s a rocky transition, but the idea is that if everyone becomes familiar with the Start screen, then two things happen: (1) the Start screen becomes pretty lovable, and (2) people will be more likely to use Windows 8 tablets and phones, since they share the identical interface.

In my experience with real users, that’s exactly what happens. With a few simple tweaks (especially this one), it’s easy to spend 99% of the work day in the Windows 8 desktop and use the Start screen as – well, as a full-screen Start menu, which isn’t such a difficult concept after all.

It’s no surprise, though, that a very vocal group of people are howling because their beloved Windows 7-style Start menu has been taken away. There are actually two different things in their minds.

One is the admittedly odd decision to leave the Start button itself off the Windows 8 desktop. That was just weird. If you jam your cursor into the lower left corner, you can click to the Start screen, but why take away the psychological comfort of a button where a button ought to be? It takes a while to make the mental adjustment to use the Windows key on the keyboard instead. Lots of grumbling about that.

According to Mary Jo Foley, Microsoft execs got sick of the grumbling and called the Windows 8 designers and laid down the law: Put The Damn Button Back. Microsoft is working on an update to Windows 8 that will be released late this year. It’s now expected that Windows 8.1 will have a button in the lower left that will send you to the Start screen. It’s not a big change but it may calm things down.

The other complaint comes from people who believe a Windows 7-style Start menu is more natural than the tiles on the full-screen Start screen. Windows 7 has replaced Windows XP as our comfortable old friend, and many people just aren’t interested in retraining themselves or their employees to use the Windows 8 Start screen.

Microsoft isn’t going to help. The Start screen is here to stay. I’d urge you to use it, learn it, love it.

For five bucks, you can install Start8, a small but inspired bit of software from Stardock, and have a Start menu with virtually all of the functionality of the Windows 7 Start menu. This is a Windows 8 desktop with Start8. 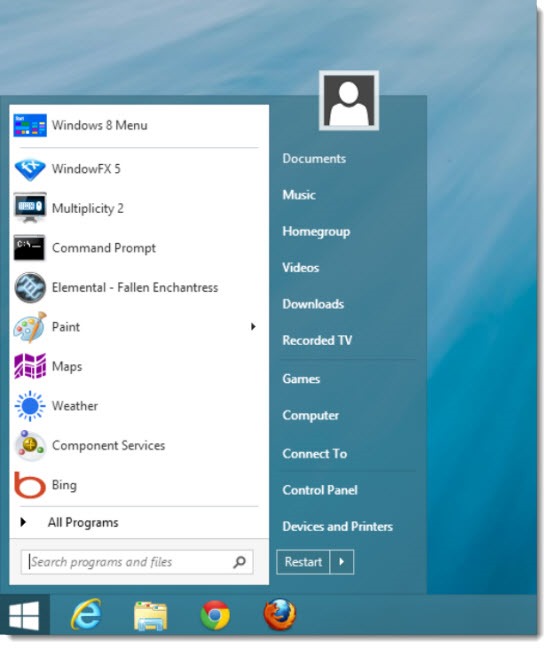 Stardock has built in all the functions from Windows 7. The search bar lets you search apps, settings, and files. The Restart button is right where it should be. You can get to Control Panel, the Printers folder, lists of recent documents, and more.

If you’re adventurous, the menu can be customized – you can display a reduced-size version of the Windows 8 Start screen without leaving the desktop, for example. The hotspots in the corners of the screen can be disabled to avoid accidental clicks on the Charm bar as you mouse around.

There’s an additional option which is very important to some people: Start8 allows you to boot directly to the desktop when Windows 8 starts, bypassing the Start screen completely. That’s another natural option that should have been in Windows 8 all along. Microsoft is reportedly going to add that option in the Windows 8.1 update later this year, but you can have it now with Start8 for $4.99.

Stardock has another program that might appeal to anyone working on a Windows 8 desktop computer with a large monitor. ModernMix runs full-screen Windows 8 apps in windows on the desktop. Apps like News, Weather, Business, and Travel look great on a laptop or tablet but they’re unwieldy when they’re blown up to fill a 24” monitor. ModernMix puts each one in a window, making it easier for mouse users to switch from one to the other. Apps can be pinned to the taskbar, plus they get a title bar and an X button in the upper right to close them.

Neither of these programs is necessary, but if a Start menu will help you find peace with a Windows 8 computer, then don’t hesitate. Windows 8 has much to recommend it, so let’s not have cosmetic issues keep you from adopting it.