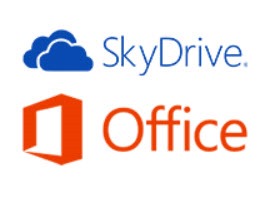 Skydrive has become more compelling for business users because it is integrated with Office (Word / Excel / Powerpoint) in two ways:

—  Documents can be opened and saved in Skydrive directly from Office programs.

—  Office documents in Skydrive can be viewed and edited online in a web browser with Office Web Apps, web-based versions of the Office programs that are 100% compatible with Office file formats.

THE DOMINANCE OF MICROSOFT OFFICE

Microsoft Office is installed on more than 1 billion PCs.

Office is everywhere. It achieved its dominance because it was easier for businesses to work together if they shared common file formats. Microsoft is going to make sure that Office continues to dominate by making it ubiquitous, available everywhere.

Microsoft is moving aggressively to extend Office to the new post-PC world, where you expect to be able to do work on mobile devices and multiple computers. The new subscription-based licensing permits Office to be installed on up to five computers, PC or Mac, with plans available for home and for office users. Special Windows RT versions of Word, Excel and Powerpoint are included on Surface RT tablets. Windows Phone 8 devices include phone-sized versions of Word, Excel and Powerpoint. It’s widely believed that versions of the Office programs will be released for iPads and Android tablets, although the latest rumors suggest that might be delayed until Fall 2014.

We are all Office users. Skydrive makes it easier to use Office to work on your files. It’s really that simple.

When you use Office 2013, it encourages you to sign in with a Microsoft account. When you do, Skydrive becomes the default location in the Office programs for opening and saving files.

That’s a big deal! At first it’s disconcerting to click on File / Open and see Skydrive as the first option. It takes an extra click to get to the Documents folder on your local hard drive. After you commit to storing files in Skydrive, of course, it’s just as natural as storing files in Documents, but with the added convenience of having access to them from anywhere. 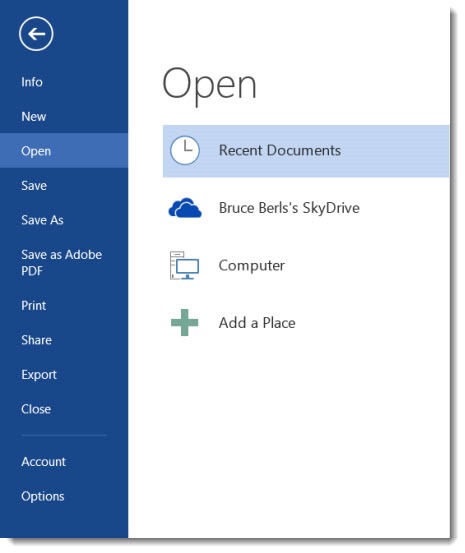 Install the Skydrive desktop app for your computer and you can open and save documents to your Skydrive folders even if you are offline. All changes will be synced next time your computer goes online.

If you have files stored in Skydrive, your list of files will be identical wherever you open Word – on your office computer, your home computer, or your laptop. More: the list of Recent Documents is synced by Office behind the scenes, so it will also be the same on each computer.

(Geeky detail: if you decide not to use Skydrive, click on File / Options / Save in the Office programs and check the box, “Save to computer by default.”) 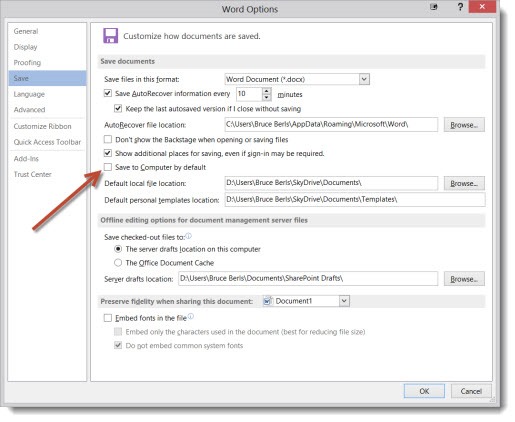 Microsoft has rapidly improved the browser-based versions of Word, Excel, Powerpoint and OneNote.

Upload a Word document to Skydrive. Then go to the Skydrive web site and click on the document.

The file will be displayed in a viewer that shows it with all formatting, as it would come out of the printer.

If you click on Edit Document / Edit in Word Web App, the online version of Word will appear. 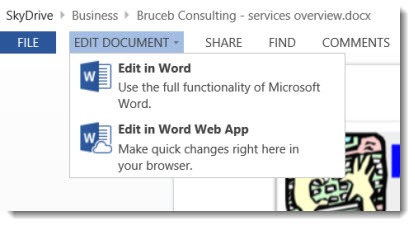 Some formatting may not be displayed in the Word Web App, but nothing is lost – the web apps preserve 100% of the formatting. This is one of the reasons to prefer Office Web Apps to the horrible mangling that happens when Office files are worked on in Google Docs.

The editors are full of features and more are being added all the time. The ribbon has the commonly-used editing features. Drag and drop editing is supported now. A floating ribbon pops up next to highlighted text or pasted text. The web apps are being rewritten to work in all the major browsers, not just Internet Explorer. The whole experience is very much like using the installed version of Word.

The other choice for editing is Edit in Word. The file will open in the local copy of Word, if it’s installed on the computer you’re using. When you save the file, it will be saved directly back to Skydrive – no fumbling with saving it locally and then transferring it around.

You can also create Office documents from scratch with the Office Web Apps, of course. 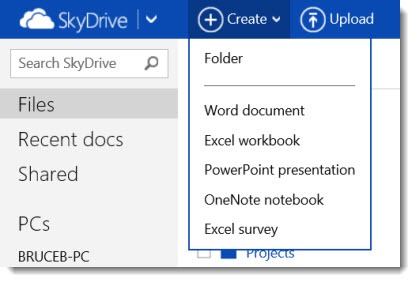 If you’re using a computer for your business, you’re almost certainly using Office, and it’s likely that you are working from more than one computer. Using Skydrive just makes sense. It’s more than a place to store files; it’s a working environment that lets you view those files, edit them, print them – anywhere, on any device.

It gets even better. Skydrive and Office Web Apps are built for sharing and collaboration, more easily and more effectively than any other online file platform. More to come!