Skydrive Keeps Getting Better! (Except For The Pesky Name Problem) 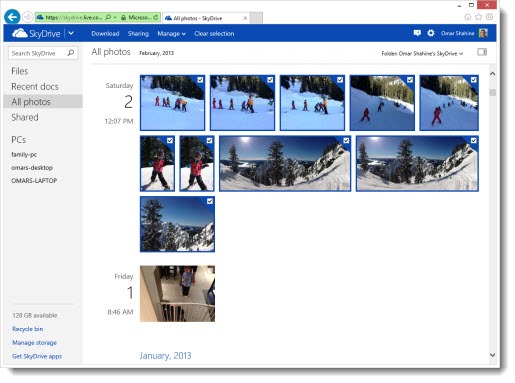 The Service Soon Not To Be Known As Skydrive got some nice updates recently – along with a court decision that gives Microsoft yet another nasty branding problem.

The good news is that Skydrive continues to add new features at a rapid pace. (If you’re new to Skydrive, you’ll find lots of articles here to help you get caught up.)

PHOTOS  If you have photos stored in Skydrive, the Skydrive web site now offers new options for viewing them. Skydrive automatically adapts to the resolution of the display you’re using, so high-resolution photos look better on high-resolution monitors. There’s a new display that shows all photos by date, regardless of the folders they’re stored in, and a new filter in case you want to narrow that a bit. Photos are automatically rotated but now there’s a manual rotation control, in case it doesn’t get it right. Oh, and animated GIFs are shown with animation, so they can be just as annoying on Skydrive as where you saw them originally.

SHARING  Skydrive already makes it easy to share files and folders from the web site, but now they’ve added the ability to share a selection of files from different folder locations. You can share all the pictures taken on a particular day, for example, regardless of where they’re stored. Or you can choose files from different folders and share them as a group. The recipient sees the files or photos in a single view and has no knowledge of how they’re stored in your file system.

Incidentally, if you haven’t seen it, this is a sample of the email message sent when photos are shared from Skydrive. Not bad, eh? 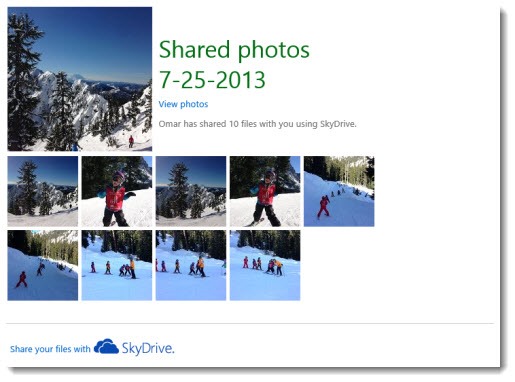 Skydrive also has a new view of shared files that makes it easier to manage them – both files shared with you, and files you’ve shared with others.

You can get more details about the most recent Skydrive updates here.

AND THE BAD NEWS  After devoting huge resources to the Skydrive service, improving it far beyond any of its competitors, embedding it deeply in Office and Windows 8 (and even more deeply in Windows 8.1), even building it into Sharepoint as “Skydrive Pro” . . .

Microsoft has to change the name.

A British court ruled that the name “Skydrive” iinfringes on a trademark owned by British Sky Broadcasting Group. The parties reached a settlement where Microsoft agreed not to appeal, and BSkyB gave Microsoft some amount of time to implement the name change. There are more details about the settlement here.

It’s too sad. Microsoft has been valiantly trying to clear up its self-induced branding confusion, slicing away “Windows Live” and “Live Mesh” and “FolderShare” and many other now-forgotten and overlapping brand names. “Skydrive” was going to be the survivor. Now we have another name change, another source of confusion and frustration to look forward to.

You may not know that this is the second embarrassing trademark loss for Microsoft recently. Microsoft had adopted the name “Metro” to describe the design aesthetic for the Windows 8 user interface and apps – full-screen programs, tiles, solid colors, fonts and typography. It’s widely believed that German company Metro AG made threats and last August Microsoft agreed to stop using the name “Metro.” Nothing else ever caught on as a replacement name so there is no approved way to refer to the look of Windows 8, leaving Microsoft spokespeople fumbling with euphemisms – “Windows 8-style UI,” “Modern UI,” “New User Interface,” “Microsoft Design Language,” and other tortured variations. Journalists tend to still call it “Metro.”

Now Skydrive. It’s a shame, really. Nice name. No word yet on the new name. You’d like to think it would be something simple – “Microsoft Drive,” say. Knowing Microsoft, though, it’s hard to discount the prediction that the new name will be “Microsoft Windows C Drive Professional 2013 Xbox Enhanced Ultimate Storage Edition for Students and Teachers Service Pack 1.”