Almost three years ago Microsoft gave us a built-in way to block ads in Internet Explorer and preserve our privacy online – and we’re not using it because we don’t know it’s there!

Ever since Internet Explorer 9 in February 2011, IE has had a feature named “Tracking Protection.” When it is turned on, third party networks are blocked from collecting data about your web browsing. In many cases, their ads are blocked from appearing on the web site you’re visiting, which can make browsing faster and prevent IE crashes.

Scroll down for the details about how to enable Tracking Protection, after some background so you know what it’s doing.

Almost every web site built on advertising (which means almost every web site) creates blank spaces for ads to appear, then contracts with huge ad networks to provide the content to fill those spaces – and accumulate data about your browsing habits along the way. When you are browsing a site served by Big Ad Network 1, it makes a note of what you were looking at. When you visit a different site that also contracts with Big Ad Network 1, you will be served ads that relate to the first site you were visiting.

When you enable a Tracking Protection List in Internet Explorer 9/10/11, your computer receives a list of advertising networks that should be blocked from tracking you with any of the modern web tools – cookies, tracking pixels, web beacons, hit counters, analytics scripts, and more. Note that it does not completely block all use of those tools, just the ones associated with known advertisers.

There is a choice of Tracking Protection Lists. Some of them have the effect of blocking the ads from those third-party networks. It is not a complete ad-blocker but it definitely makes for a less cluttered web.

HOW TO ENABLE TRACKING PROTECTION 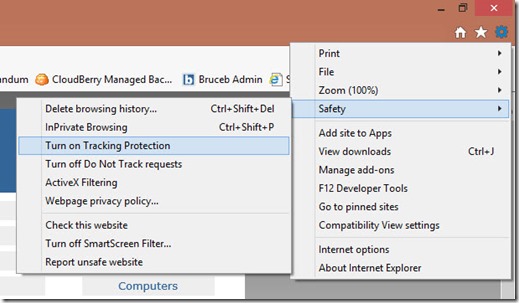 In Internet Explorer, click on the gear in the upper right, then click on Safety / Turn On Tracking Protection. 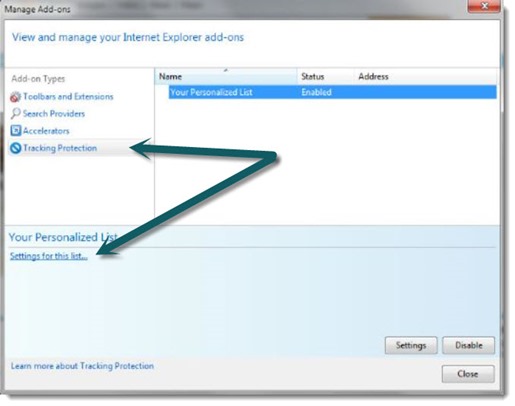 I chose EasyList Standard because the list has the side effect of blocking ads. Some of the others are more focused on tracking only. The only wrong choice is the TRUSTe list, which is funded by advertisers and works for their benefit, not yours. Ed Bott investigated most of the list providers and wrote an analysis here, if you’re interested.

You can have more than one Tracking Protection List but there is one caveat – if you include a list that explicitly allows an ad network (like the TRUSTe list), that will override any list that blocks the same network. Don’t go nuts adding lists. If you want to add or change lists later, click on the gear / Internet Options / Programs / Manage Add-Ons / Tracking Protection.

There are a couple of downsides.

—  Some web sites may not display correctly if the ads are missing.

—  Some ads deserve to be seen, either because they’re relevant and inoffensive, or because the owner of the web site deserves the money. You might not feel sorry for big companies but this will also block ads on web sites run by real people trying to make a living.

ADBLOCK PLUS IS MORE COMPREHENSIVE

Chrome and Firefox users have long had Adblock Plus on their side, an add-in that blocks almost every ad on web pages, more comprehensive than the blocking that occurs as a side effect of using a Tracking Protection List. It claims to be the single most popular browser extension in the world with over 200 million downloads.

For some reason Adblock Plus was not available for Internet Explorer until three months ago. Now it’s available and you can remove all banners, pop-ups, embedded ads, and video ads from all web sites. I don’t have any experience or feedback so I don’t know if there are any bugs or side effects after it’s installed, but it is held in high regard in the Chrome and Firefox world.

Try a Tracking Protection List! You might miss the ads and turn it off (seriously), but you might decide it’s nice to see the web with fewer distractions.