Looking Forward: Why You Might Never Buy Another Computer 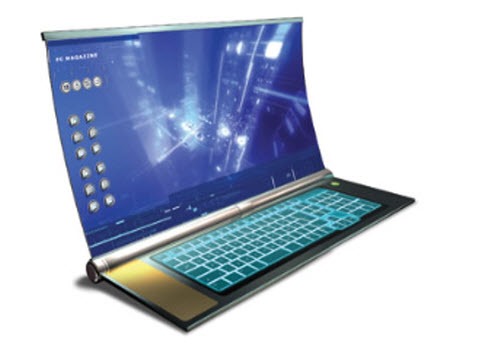 Science fiction readers are familiar with novels that describe a near-future built on an outlandish concept, followed by an Afterword where the authors reveal that they are describing very real technology that is further developed than you realized. (Recent examples, all recommended: Daemon by Daniel Suarez, about artificial intelligence; Zero Day by Mark Russinovich, about cyberterrorism; and Nexus by Ramez Naam, about brain-to-brain communication.)

Let me describe a possible future to explain why you might never buy another desktop computer. It will take three articles: one to explain today’s computing environment, one to describe the science fiction future, and an afterword about the companies that are working right now to bring you that future.

It seems quaint to remember simpler times when computing was more or less defined by Windows running on desktop computers. In 2013 the world has embraced devices built on several different operating systems and hardware platforms that are more or less incompatible with each other.

—  Microsoft has developed two versions of Windows, one for Intel processors and one for the ARM processors that are common in mobile devices. Windows RT runs on the new Surface 2 and Nokia 2520 tablets.

—  Windows 8 also introduces yet another variation, the Metro full-screen environment that runs programs more securely than traditional Windows and scales better to different size screens, but requires programs to be rewritten almost from scratch.

—  Apple has OS X running on computers and laptops and iOS on phones and tablets.

—  Android dominates mobile devices, with an 80% market share in smartphones and two-thirds of the tablet market. Google somewhat perplexingly is also developing Chrome OS, a separate sort-of operating system growing out of its Chrome browser.

Developers are forced to write different versions of their programs and services for each of those platforms. We’re accustomed to seeing apps advance in fits and starts – an app gets updated for iPhones, say, and then a month later there’s an update that supports different features for Android, followed by the initial release of a slightly different version for Windows Phone. Similarly, there’s little overlap between programming for the Windows and OS X worlds, making it difficult to develop programs that run on both PCs and Macs.

Companies are taking different approaches to the problem of making their programs available on new platforms. In the Windows world we have some companies rewriting their traditional programs to run in web browsers, although so far the resulting products are fairly limited compared to the traditional programs. Examples: Intuit has a reduced version of Quickbooks that runs in a browser, Quickbooks Online; and Microsoft continues to improve its web-based versions of the Office programs.

Meanwhile other companies are rewriting their Windows programs for the Metro environment, resulting in two overlapping versions of programs that do similar things. Example: Adobe Photoshop Elements, now available in a basic Metro version in the Windows Store to complement the traditional Windows and Mac versions; and Internet Explorer, which is (confusingly) shipped in Windows 8 in both traditional desktop and Metro versions.

It’s challenging for developers and difficult for consumers to keep up with what can and can’t be done on each platform. The lack of consistency from program to program and from device to device is daunting for everyone. It’s a practical problem that is hampering competition – Microsoft is having trouble attracting developers to Windows Phone in part because the developers just don’t have time or resources to do more than support Android and iOS. It’s also left the vendors of line-of-business programs nearly paralyzed, with many of them sticking to the safe harbor of their increasingly outdated databases and interfaces, unable to respond to users clamoring for access to this or that business program on their iPad/iPhone/Nexus tablet/Galaxy phone/Surface/Lumia phone/etc..

THE PROBLEM OF LOCAL STORAGE

There is one common, unifying characteristic to almost all of our technology now: it runs software that is stored on a device that is physically close to us. The Windows operating system is a collection of files stored on a hard drive that is next to your desk or sitting in your lap. Programs run from files that have been copied to that hard drive. The apps on your phone or tablet run from files are stored in the memory chips inside the device in your hand. In most businesses, the line-of-business apps are running from servers that are in the closet that is physically on the premises, down the hall from you.

The burden of maintaining those computers and devices is on you. They belong to you. You’re the one close enough to touch them. It’s up to you (or your cheerful and highly skilled IT consultant) to install the nonstop flow of updates required to use a computer safely. You deal with the disruption when something breaks. It’s up to you to ensure that your files and photos are backed up in the event of a failure. You have to buy a new computer every 3-4 years as they age and slow down.

Local servers impose even greater expense on businesses. Money flows out of the business to buy new server hardware every 3-4 years, and more money is spent for operating system licenses, database licenses, backup devices and software, power protection, networking equipment, and constant IT support to maintain and update it all.

Cloud services are reducing that burden. It’s easier than it used to be to set up a new computer and install the programs necessary to get work done. A lot can be done in a web browser now. Mobile devices can be exchanged quickly with little loss of momentum.

The fundamentals have not really changed for business users, though. You still have an $800 box by your desk or a $1000 laptop in your briefcase that is required to run the programs that you use every day. Attempts to bypass those expensive boxes by using iPads or Surface tablets or phones are filled with compromises and workarounds. Frequently the programs you run to do your work simply can’t be accessed from a tablet or phone, or even from a laptop that’s away from the office.

Here’s the science fiction. Imagine being able to pull up your Windows desktop – exactly the way you see it today on your monitor or laptop with all of your files and all of your programs – on any display on any device, big or small. Let’s have that happen at your office without the big box under the desk, using nothing more than an Internet connection and a device that’s so small it might be built into the wall. Turn the laptop into a paper thin display that weighs nothing because there’s almost nothing to it other than the display and keyboard – no processor, no hard drive. Get rid of the servers in the closet but continue to use exactly the same programs you’re using today.

Interested? There’s more to it. I’ll tell you how it might look in the next article – and in the afterword, I’ll tell you why you should expect to see this be one of the hot topics in the far off future . . . of 2014.