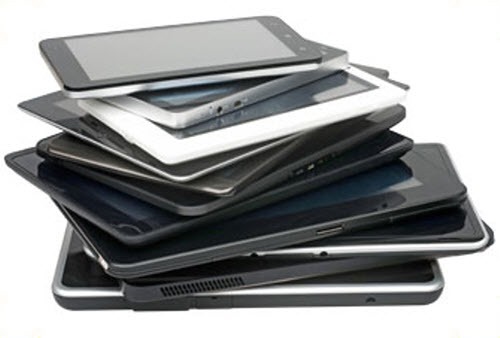 The world is changing. Here’s an anecdote to help you understand just how fast it’s happening.

My wife was at a conference last week attended by a hundred medical and legal professionals. Each person had a device for viewing the speaker slides and taking notes.

Three of them, including my wife, had laptop computers.

Ninety-seven of them had tablets, mostly iPads.

Got that? This is an audience of middle-aged professionals, not tech people, and ninety-seven out of a hundred had tablets. Three laptops in a room with a hundred people! No exaggeration. My wife felt like a dinosaur because she had a thin and light Ultrabook. She’s going to get a Surface 2 so she can blend in at meetings this year.

Measure everything you see in technology by that new reality. The shift to mobile devices is happening in front of your eyes and it is driving the decisions being made by everyone working on media and technology – Microsoft and Apple and Google, of course, but also PC and phone manufacturers, cell phone carriers, cable companies, movie and TV producers, broadcasters, publishers, and many others. Advertisers, especially retailers, are shifting ad dollars and ad development to mobile and away from all other forms of advertising. Web sites are being redesigned for mobile screens because a rapidly increasing number of visitors arrive from tablets and phones.

The market for desktop computers and laptops is shrinking fast – down 10% in 2013, the worst yearly decline in history.

Windows 8 sales are a disaster. There are many reasons for that, not the least of which is that Windows 8 appears to be succumbing to the Vista stink of death, the widespread belief that something is wrong with it because, well, because everyone just knows it’s no good. Microsoft responded to the Vista debacle by slapping fresh paint on Vista and marketing it as Windows 7, with great success, so it shouldn’t be a surprise that the latest rumor is that Windows 8 will get its own makeover and be rolled out again next year as Windows 9.

But that’s not the only problem that Microsoft faces with Windows 8 on desktop PCs and laptops. Paul Thurrott wrote a thoughtful article last week arguing that the biggest problem for Windows is ambivalence. “It’s ambivalence driven by the nature of ‘good enough’ mobile and web apps. It’s ambivalence driven by the allure of anytime/anywhere computing on tiny devices that are more cool to use and even cooler to be seen using.” Most people don’t hate Windows but increasingly we just don’t care much about it one way or the other.

CES, the giant electronics show in Las Vegas, just wrapped up. There was a handful of new laptops and hybrids on display (including an overdue refresh of Lenovo’s flagship Thinkpad X1 Carbon Touch), but they were barely visible drops in the ocean of tablets, phones, and mobile device accessories.

Take a few minutes and go through this slideshow put together by Business Insider. It is packed with numbers that will take your breath away. Here are just a few of its findings:

– 60% of online devices are either smartphones or tablets.

– Smartphone sales are booming and tablets are cannibalizing PCs.

– Mobile is the only media time that is growing (vs. time spent on TV, radio, print, and media consumed online on computers).

– China has twice the internet users of the US, 80% of which are mobile.

– Most new app projects and half of app downloads are now Android.

– There will be an estimated 75 billion connected devices by 2020, including the emerging technology of wearable devices, fitness trackers, and networked houses.

Business desktops are not going to go away but they are unlikely to be the center of attention again, and desktop users will have to deal with the side effects of the shift to the mobile world – all attention devoted to apps designed for touchscreens and full-screen display on small devices, with traditional desktop programs given short shrift. It’s been less than seven years since Apple shipped the first iPhone. If anything, the shift away from computers and laptops to smaller, simpler mobile devices is going even more quickly than that.