Microsoft (Still) Does Not Call To Fix Your PC 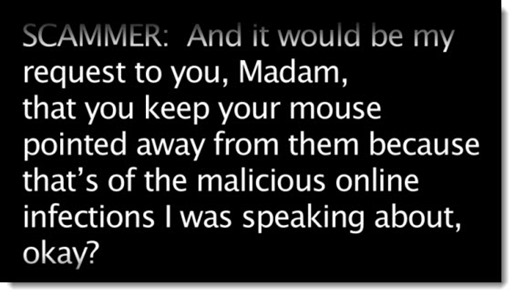 The phone rang when I was in a client’s office last week. A heavily accented Indian man said, “I am calling from Microsoft. We have received reports that your computer is sending out virus messages. I would like to help you with that.”

It was a cybercriminal! Acting quickly, I traced the call, then assembled a team of IT commandos to rain vengeance on the scammers.

In real life, I told my client to hang up the phone and ignore it when it rang again and again.

There is a resurgence of fraudulent phone calls from criminals trying to steal your credit card and install malware on your computer. I’ve heard several other stories from clients about scam calls in the last few weeks. Be careful!

This is an article from 18 months ago about the Microsoft phone scam. Although there are periodic crackdowns, the same scam is still being run today. Microsoft has updated information about how to avoid being a victim. Be careful!