Speed Up Your Slow Laptop With An SSD 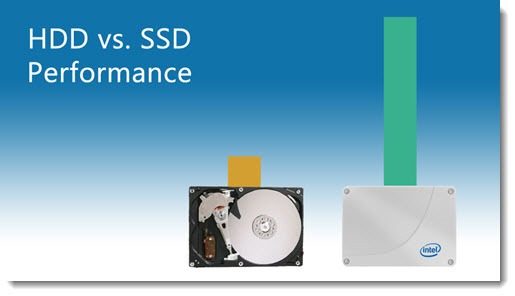 Laptops fly when they have a solid state hard drive (SSD) instead of a conventional hard drive. If you buy a new laptop with an SSD, it will make more of a difference to your day-to-day experience than the processor or the amount of memory or any other component.

If you’re not familiar with SSDs, I wrote this explanation a few years ago. Basically, a conventional hard drive is a sealed box with thin disks spinning around inside it; an SSD is like a big USB stick with no moving parts. The slowest SSD is able to read and write data at a rate that eclipses the fastest conventional hard drive.

Recently I was called by a client who had run out of space on her laptop’s 128Gb SSD. At her employer’s request, we replaced it with a 500Gb conventional hard drive. On the way out the door I warned her that she should expect a dramatic drop in performance.

One week later I was back to yank the conventional hard drive and replace it with a larger SSD. Her experience had been dreadful. A reasonably speedy laptop had been reduced to a crawl. Outlook was taking 10-15 minutes to open. Switching programs was glacial.

When we put an SSD in the laptop, Outlook went back to opening in 20-30 seconds, just like before.

It was a dramatic reminder that the choice of hard drive is one of the biggest differences between low-end and more expensive laptops – and the extra money is well spent.

With an SSD, Windows 8 starts almost instantly and programs snap into place. SSDs use less power than conventional hard drives, so the battery lasts longer. They are tuned to go to sleep and wake up reliably and quickly. It makes a laptop respond like a tablet, making it possible to pick it up on the fly to check something and put it away again without a second thought.

Purists would want me to mention that an SSD actually does not increase processing speed for certain types of programs. The performance of graphics and processor intensive tasks will not change dramatically. Programs read and write to and from the hard drive when they’re starting up, when you open and close files and web pages, and when you’re switching programs. The speedup is so dramatic at those times that your perception is that the entire laptop is super powered. It’s a bit of an illusion but it’s a great illusion.

Although conventional hard drives are cheaper, prices on SSDs have dropped dramatically in the last few years. A Samsung 250Gb SSD is $139 at Amazon. Drive capacities are increasing quickly – Samsung now has 750Gb and 1Tb models, for example.

You can give your old laptop a big shot in the arm if you put in an SSD, but only if you have the technical skill to switch the drives or a deep pocketbook to pay me to do it. The hard drive manufacturers typically include software to migrate from the old disk to the new one. It’s not very difficult when it goes smoothly but unfortunately there are many technical pitfalls and it’s a slow process – expect me to present a bill for two hours or more before it’s done.

(Here’s an example of how technical challenges can come from simple problems. Samsung bundles a bootable CD with migration software and an adapter to connect the new drive with a USB cable for the migration. I’m working on a laptop that doesn’t have a CD drive, and I don’t have a USB CD drive handy. I converted the CD into a bootable USB stick by running a series of diskpart commands from an elevated command prompt. There will be more things like that. This isn’t a self-help project if you don’t have some technical skills!)

Whether or not you get an SSD to speed up an old laptop, keep it in mind when you’re shopping for something new. You shouldn’t buy a laptop that doesn’t have an SSD. If that means you can’t buy the five hundred dollar Best Buy special, then reach deeper into your pocketbook. It’s worth it.