The Shrinking World Of Hard Drives 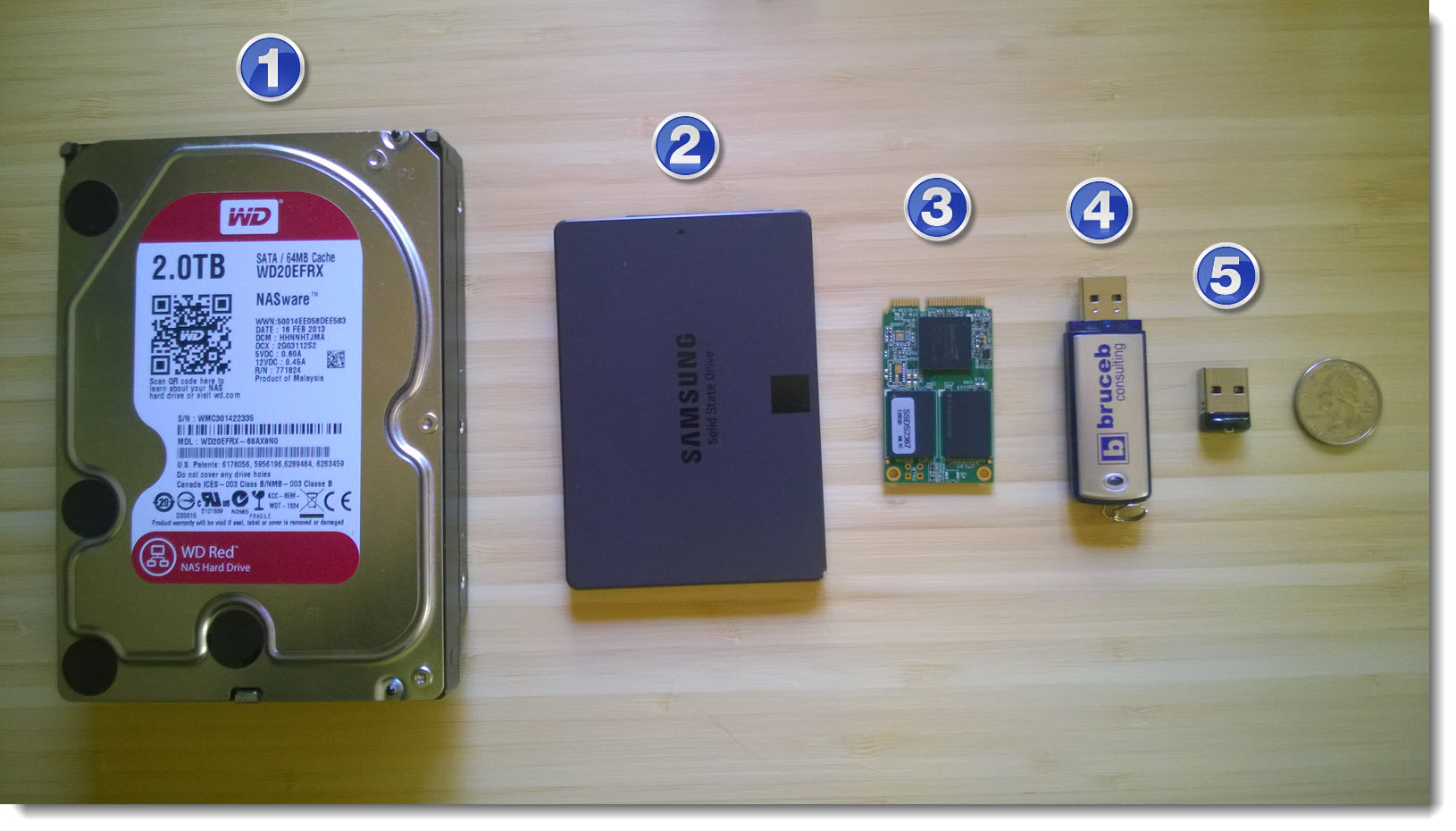 Here’s a visual image to help you keep track of the ever-shrinking world of data storage.

(1)  Number 1 is a conventional hard drive, referred to as a 3 1/2” drive because that’s the diameter of the spinning disk inside. The case actually measures four inches across, just under six inches tall, an inch deep. Hard drives have had different connectors but the physical dimensions have been constant since the 1980s. Capacity is constantly increasing (4Tb drives are now commonplace) and the price per gigabyte is always falling.

(2)  Number 2 is a solid state drive (SSD), in this case a Samsung 120Gb drive. They’re referred to as 2 1/2” drives because some of them have a 2 1/2” spinning platter inside, but the actual case is 2 3/4” by 4” and most of them now have no moving parts. They’re much thinner than a conventional hard drive. This is the size used in most laptop computers. Prices per gigabyte have plummeted in the last three years; 120Gb and 240Gb SSDs are affordable upgrades and 1Tb SSDs are readily available but still pricey.

(3)  Number 3 is the one that surprised me this weekend when I found it inside the tiny Intel NUC desktop computer. It’s called an mSATA solid state drive and measures 1 1/4” by 2”, with barely more than the thickness of a credit card. If you’ve been using computers for a while, it’s very hard to convince yourself that this is a hard drive that can hold as much as the larger SSDs, but these little wisps are already available with up to 1Tb of storage space. Apparently these drives are part of the secret of designing ultra-thin laptops, and Intel uses them to pack a full-power desktop computer into the NUC’s four-inch square box.

(4)  Number 4 is a standard USB memory stick, although obviously it’s a particularly attractive one, don’t you think? Like most inexpensive USB sticks, it’s about the size of your little finger and holds a modest amount of data, 8Gb in this case.

(5)  Number 5 is also a perfectly standard USB memory stick, except for being so small you can barely see it. When it’s inserted into a USB port, it’s actually difficult to grab the teensy part that sticks out to pull it out again. Oh, and it holds 32Gb of data, and costs less than twenty dollars. It’s dwarfed by the quarter next to it in the photo – you could just about hide it under a dime.

A few years ago Cory Doctorow gave a thoughtful speech about the future of computing (highly recommended – here’s video and here’s a transcript). He described data storage this way:

‘Your grandchildren will turn to you around the Christmas table and say “Tell me again, Grandpa, tell me again, Grandma, about when it was hard to copy things in 2011, when you couldn’t get a drive the size of your fingernail that could hold every song ever recorded, every movie ever made, every word ever spoken, every picture ever taken, everything, and transfer it in such a short period of time you didn’t even notice it was doing it, tell us again when it was so stupidly hard to copy things back in 2011”.’

It’s only three years later and we’re on that path, perhaps a little further down the path than you realized. Most of you could fit your entire photo collection on that little thing that’s the size of a dime. Most small businesses could fit all of their work product, everything they’ve ever created on a computer, on a 1Tb drive an inch and a quarter across. Amazing world, isn’t it?