Luxury Reading With The Kindle Voyage, And Other Amazon Mistakes 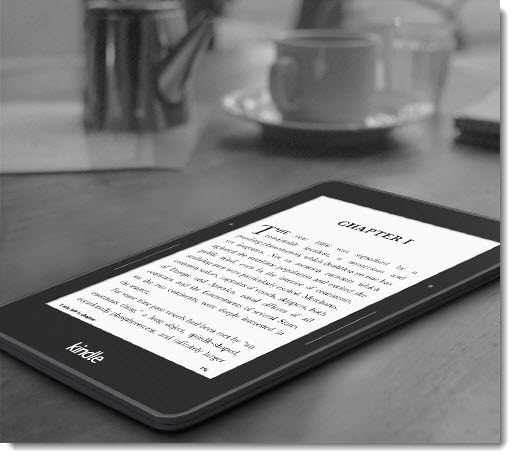 Amazon has been making some odd product decisions lately, and the latest was just announced today: the Kindle Voyage, a black & white e-reader with some modest improvements over the current Kindle Paperwhite that sells for a luxury price, starting at $199 and scaling up to as much as $289.

I’ve long maintained that the Kindle Paperwhite is the closest thing on the market to a Perfect Device. In its most recent incarnation, it is exactly the right size and weight, with crisp text and perfect lighting. The Paperwhite is affordably priced – $119 for the basic wi-fi version, or $139 for a wi-fi version that disables the modest ads that play on the lock screen. (It’s possible to get a more expensive Paperwhite with an always-on AT&T 3G connection to download books if you forget to do it when you’re on a wireless network but that’s really not necessary.)

There’s also a basic Kindle for $79 but the improvements to the screen and lighting in the Paperwhite make the basic Kindle a poor choice.

Now Amazon is adding the Kindle Voyage, which closely resembles the Kindle Paperwhite – six inch black & white screen, crisp text, long battery life – and adds an extra eighty dollars to the price tag. There is something that feels very different about an e-reader for $119 and an e-reader for $199.

What did Amazon do to gold-plate the Kindle Voyage?

It’s a bit thinner. The case materials feel good. The screen resolution is higher so the text is crisper, although the Paperwhite is already so sharp that it rivals printed books. The surface of the Kindle Voyage is flat; there’s no bump at the bezel where it meets the screen. There’s a new sensor under the bezel to turn the page so you don’t have to extend your finger onto the page. There’s a sensor to adjust the lighting automatically.

Maybe that’s worth eighty dollars to some of you. None of it actually changes the experience of reading on a black & white Kindle, which is already quite wonderful on the Paperwhite. These are intangible luxury fit-and-finish items that ought to be the standard features of a new Paperwhite at the same price, not add-ons for a 60% higher price.

I haven’t seen a Kindle Voyage. At this price I’m not sure I ever will see one.

It’s the second device from Amazon at a peculiar, head-scratching price point. When it became clear that Amazon was going to release its own smartphone a few months ago, Amazon’s reputation led people to expect a device that was aggressively priced with well-chosen basic features and no fluff. Instead the Amazon Fire phone has odd, mostly useless features (3D head tracking?), and like the Amazon tablets, it does not have access to most of the apps available in the Android store. Even stranger, it was exclusive to AT&T and priced high – $199 on contract, $649 off contract. At that price, every other phone was a better deal.

The result should have been obvious. Amazon has sold virtually no phones since the Amazon Fire was introduced in June. There are estimates that Amazon sold less than 35,000 phones in its first three weeks, which is a humiliating rounding error on Samsung or Apple sales spreadsheets. Apple just took four million orders for the new iPhones in the first 24 hours they were available.

Last week Amazon cut the price of the Fire Phone from $199 to 99 cents with a two-year contract. It still won’t sell any. It’s one of the most embarrassing product launches in a long time. (Industry watchers are still chuckling about the botched launch of Microsoft Kin phones in 2010 aimed at teenage girls and yanked from the market after less than two months.)

I have long had a high opinion of Amazon. It’s been easy to buy into the legend of Jeff Bezos, who is described as a smart visionary always a few steps ahead, the Steve Jobs of retailers. My mind boggles at the thought of the technology powering the Amazon warehouses and distribution system. Amazon Prime second-day shipping is a brilliant marketing tactic that has reshaped my buying habits.

My faith is being shaken by some of Amazon’s missteps. The Kindle Fire tablets are pale imitations of true Android tablets, with an unpleasant interface and poor selection of apps. The Kindle Fire phone is a failure in almost every way. Amazon Video is a mess, difficult and unpleasant to navigate. And now an unnecessary luxury reader for too high a price. It makes Amazon look less like a far-sighted leader and more like Wal-Mart with a high-tech gloss.