The Blind Men, The Elephant, And Windows 10 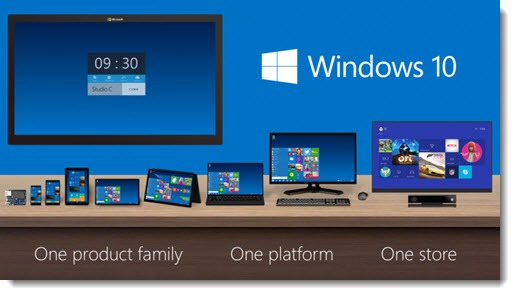 You remember the story – a group of blind men touch different parts of an elephant and compare notes. They discover that each of their perspectives is true but not the totality of truth.

On Tuesday Microsoft announced that the next version of Windows will be named Windows 10. A very rough preview version is available now so enterprises can begin to prepare. The final version will be available in about a year.

Microsoft is attempting to create an elephant. If it is successful, you will only see the portion of it that is appropriate for you – and you will conclude that it is the best version of Windows yet. Your experience won’t be the same as someone else approaching it with different devices and different desires, but they will also believe it’s the best version yet.

It will be an impressive trick if it works.

First, the obvious question. Why is the next version of Windows named Windows 10?

Three theories stand out. It may be that all of them are true, and there are likely other reasons we don’t know about.

•  Theory 1: It’s crucial for Microsoft to get far away from the Windows 8 debacle. Skipping a number suggests that Windows 10 is a big step forward and a clear divide with the past. This is the important reason, and the Windows 10 name actually accomplishes this pretty well.

•  Theory 2: There is a fair amount of legacy code originally written for Windows 95 and Windows 98 that contains this string: if (osName.startswith(“windows 9”))  Those programs would likely break if the next version was named Windows 9.

•  Theory 3: Because 7 8 9. (It’s the ultimate dad joke. The Microsoft exec presenting Windows 10 actually said this on stage with a grin during the presentation.) 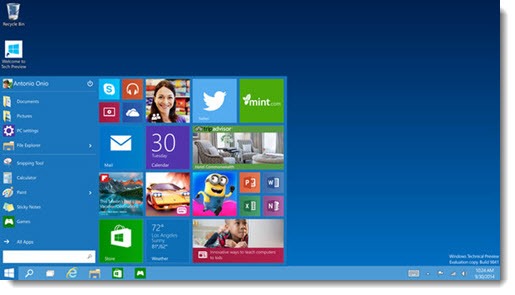 Here are some of the different parts of the elephant.

Windows 7 users: Windows 10 will look like an update to Windows 7 – Windows 7.1, say. It will be familiar and comforting. There is a Start menu – enhanced with some tiles, but a Start menu nonetheless. The desktop will be front and center. Metro apps (the ones that run full-screen in Windows 8) will run in resizable windows on the desktop, just like every other program.

This is the crucial audience. Microsoft has to convince enterprises to upgrade the huge numbers of computers in large companies. As of September, Windows 7’s worldwide market share was still growing, while Windows 8/8.1 market share has been stagnant or even declining in recent months. Pricing for Windows 10 was not discussed but it will likely be low-cost or even free for Windows 7 users, and Microsoft will be trying to make the upgrade process relatively painless.

Windows 8 users: Windows 10 will look like an update to Windows 8.1 – Windows 8.2, say. It will have live tiles, Metro apps, and a consistent look and feel across different size screens. Windows 8.1 began the process of returning the desktop to a prominent position to accommodate keyboard and mouse users; Windows 10 is another step down the road already being taken.

Keyboard and mouse users: The interface elements better used on touchscreens will disappear and all tasks will be accessible with a keyboard and mouse, just like Windows 7. All programs run in windows on the desktop, including the Metro apps that now only run fullscreen in Windows 8.

Tablet and touchscreen users: When Windows 10 senses that a touchscreen is present on a tablet-sized device, the whole interface will shift subtly to emphasize controls better suited for touch. The Start screen will return in a full or nearly-full screen view, and Metro apps will run fullscreen. Taskbar buttons will be larger and navigation will be done with improved versions of the slide-in bars from top and sides.

Hybrid users: If you have a 2-in-1 device (a Surface Pro 3, for example), Windows 10 will be designed to adapt to whatever is appropriate on the fly. If you’re in desktop mode and you detach the keyboard from a Surface Pro 3, you’ll be prompted to switch to Tablet mode. This kind of switching will be handled by a new feature called Continuum, not yet available for testing.

Windows phone and small screen tablet users: Windows 10 will be released in versions for Windows phone and mini-tablets. Microsoft is working on creating a development environment that simplifies the process of writing a single app for all devices from PCs to tablets to phones, with only minimal additional coding to change the program as required for different size screens.

Keep an ear out for news but don’t wait to buy computers for another year. Windows 8 is a lovely operating system and the improvements in Windows 10 will be as much marketing as they will be substantive. Anything you buy today will be able to be upgraded to Windows 10 when it’s available.

Maybe Microsoft will be able to move past the Windows 8 Stink Of Death. A year from now it may have a great operating system. Will anyone care? Stay tuned.