HERE And There In The World Of Mobile Maps 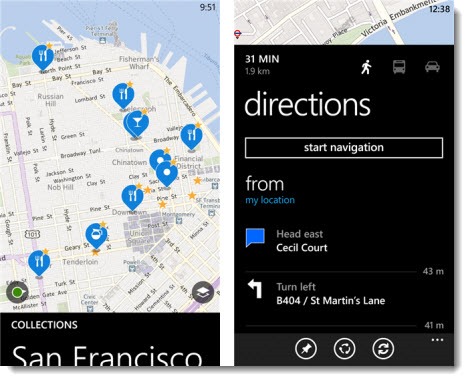 There were two interesting announcements today about the free Nokia HERE mapping and navigation smartphone app. With some background, you’ll understand why the announcement of improvements in the Windows Phone apps is less important than the general availability of HERE Maps for Android (and iOS around the corner).

Mapping programs are some of the popular apps on mobile devices, and ads on maps are major sources of revenue.

Google Maps has always been deeply built into Android, of course, and Google improves it continuously.

Apple used Google Maps on iPhones for years before removing it two years ago in favor of its own Apple Maps. The Apple Maps rollout was bumpy (aka “fiasco”) but Apple smoothed out its rough edges and it has settled down and become (mostly) reliable. Yesterday Apple completed the transition away from Google Maps and removed all vestiges of Google Maps from iCloud, where it had been powering the Find My iPhone service.

Microsoft created its own mapping service, Bing Maps, and continues to use it on its websites and integrated into some of its programs. Bing Maps was originally the default map app on Windows phones. Under the hood, Bing Maps is powered by technology licensed from Nokia.

Nokia, in fact, is one of the mapping powerhouses in the world, after building its map business and acquiring major mapping companies for more than a decade. In addition to powering Bing Maps and Yahoo Maps, Nokia’s mapping technology is deeply embedded in the automotive and GPS industries and is used by governments and large companies worldwide. Nokia data is used in 80% of in-car navigation systems. It can also now be used through a lovely redesigned website at www.here.com.

When Nokia threw its smartphone business behind Windows Phone in 2011, the first seeds of confusion were sowed. Nokia created its own map app, eventually named HERE Maps, and made it exclusively available on Nokia’s Lumia Windows phones, which was a bit of a problem: it made owners of other brands of Windows phones irritable because HERE Maps was far better than the Bing Maps app, and in fact it started to crowd Bing Maps out of sight.

Last year Microsoft agreed to acquire Nokia’s smartphone division. Nokia kept its mapping business and struck a licensing deal with Microsoft for the HERE Maps app. Microsoft’s purchase of Nokia smartphones was finalized at the beginning of 2014. By that time, HERE Maps was basically the exclusive map app on Lumia phones and was starting to become available on other brands of Windows phone.

HERE Maps, then, is a Nokia product that’s quite good, arguably competitive with Google Maps and better than Apple Maps for reliable maps and accurate driving directions. It has a major advantage over both on phones: Nokia HERE maps can be downloaded and used offline, making HERE the best choice for anyone in an area with spotty cell coverage.

Until this week, it was only available as a smartphone app on Windows phones. Since the beginning of the year, Microsoft has been working with Nokia to improve the apps and make them more widely available. Today major updates to HERE Maps on Windows Phone were released, adding 18 new countries, fixing bugs, updating and renaming the service that lets you sync your personal map collections on multiple devices, and making the group of HERE apps available on all Windows Phone devices, including non-Lumia phones and Windows phones that have not yet been updated to Windows Phone 8.1. (In other words, Verizon customers.)

Since Google Maps and Apple Maps are not available on Windows phones, that’s good news for the vanishingly small number of Windows phone users. In a different world, that would even be a competitive advantage for Windows Phone.

But as I’ve been saying (and lamenting) lately, we live in an Android and iOS world, and there are a lot of signs that Windows Phone will continue to slip out of sight and out of mind. Nokia, the company that single-handedly kept Windows Phone alive during the last three years, is also the most recent company to knife it in the back.

You see, the other announcement today was the general availability of an Android version of HERE Maps. It’s all there – offline maps, voice guided turn-by-turn navigation, public transit data, real-time traffic reports and more.

What’s more, Nokia confirmed that an iOS version of HERE Maps will be launching early next year.

The explanation in September from Sean Fernback, Nokia Senior Vice-President, was unusually frank, and yet another reflection of the dimming fortunes of Windows Phone. From the interview in The Next Web:

“ ‘It was always the ambition to be on Android, we just took a decision at the beginning of the year to accelerate the program,’ explained Fernback, in a frank opening to our interview. ‘And also to ensure when we talk about apps, we’re serving both common platforms, which is, of course, Android and iOS.’

“ ‘As a result of the (Microsoft/Nokia) transaction, we’re having to wind down our Windows Phone app development and shift it over towards Android and iOS,’ explains Fernback.

“Fernback did stress that support for Windows Phone isn’t being phased out completely, not at the moment at least. It’s just limiting the resources it throws at the platform, including time and money spent developing for it.”

That’s about as clear a signal as you can get. Nokia, the company that bet its fortunes on Windows Phone three years ago, is now going to focus on Android and iOS and wind down Windows Phone app development. It’s yet another sign of Microsoft’s difficulty in getting developers to think of Windows Phone as an equal platform.

If you have an Android phone, try HERE Maps when it appears in the Google Play store in the next few days. Google Maps is great but HERE Maps has some unique advantages.