Windows 10 And The Evolution Of Personal Technology (Now With Holograms!) 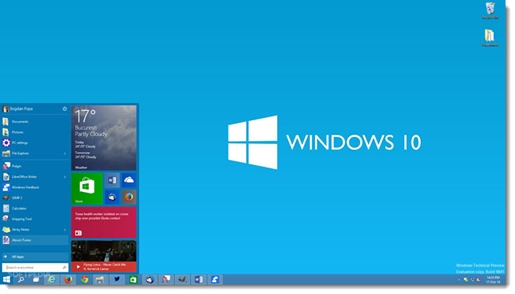 Microsoft demonstrated many of the new features in Windows 10 at a press event yesterday, beginning a campaign to drum up excitement for the relaunch of Windows on computers, tablets and phones this fall.

It was an exciting event for tech enthusiasts. Don’t count out Microsoft! It is engaged in a long project to redesign Windows and integrate your experience across all your devices, trying to stay dominant on the desktop and become relevant in the mobile world. There will be a long delay in 2015 before this elaborate package will be ready – and delay can be deadly, because Apple and Google are not standing still while Microsoft does its work. But the demonstration today contained visions of the future that are more complete and more interesting than anything we’ve heard from other companies.

In the next few months, I’ll tell you about specific features in Windows 10. Today, I want to mention one specific fact that is crucial to everyone, then step back and look at the big picture of where technology is in 2015. It might help you put the details into context.

The crucial fact is that Windows 10 will be a free update for every computer running Windows 7 and Windows 8. You will be able to update a Windows 7 or 8 computer for free for a year after Windows 10 is released. Once you have Windows 10 on a computer, it will be maintained for free for the life of the computer; in other words, Microsoft is not going to pop up and ask for money later. Microsoft wants everyone on Windows 10, period. We’ll find out if upgrades are smooth and easy but we can be optimistic – that process has been greatly improved in the last few years.

Step back from Microsoft and Windows 10 for a minute. Let’s look at the big picture.

In the 80s and early 90s, we adjusted to a world with standalone personal computers on our desks. It changed the way companies organized their businesses and started the first of many changes in the job market. Word processor and spreadsheet programs on computers were revolutionary and disruptive. A single, small example: stenographers and secretaries began to disappear almost immediately as businesses found new ways to create and store their data.

When the Internet arrived in the mid-90s, the pace of change accelerated as a new world appeared where our computers became connected to each other and to sources of information online. Entire new industries were created, old industries collapsed, and our work and social habits began to change. The Internet is changing our lives and the global economy in much the same way that the Industrial Revolution changed the world in the 1800s.

In the mid-2000s, Apple introduced the iPhone and spearheaded another change which in some ways is as profound as the Internet itself. We are now in a world where everyone has a powerful computer on their person all the time. Now we’re not limited to experiencing the benefits of technology and communication only when we’re sitting at a computer. That smartphone in your pocket gives you immediate access to your social life, your work life, and online services all the time, no matter where you are. The computer in your pocket knows where you are, what you shop for, and what your interests are.

We are just at the beginning of the transformation of our lives, our businesses and the world economy as these portable computers – “smartphones” – are woven more deeply into our lives. Uber could not exist until we had connected computers in our pockets and we have only seen the beginning of the effect it will have on the transportation industry. There is a generation growing up with complete, natural dependence on their smartphones to run their social lives. Businesses are building their processes around mobile devices in every way that can be imagined.

These are all broad trends that you can see happening around you. Here are three more ways that the world will be evolving in front of your eyes.

Quickly we have come to expect to have access to our “stuff” – our files and social information and work resources – from any device. One of the most active goals for developers at Microsoft, Apple, and Google is to tie your devices together in ways that feel completely natural and organic, so that you can pick up and set down any device around you and work naturally and continuously on all of them. Apple is working on Handoff to let you switch between iOS and OS X on documents, mail and even phone calls without pausing. Google and Microsoft have online word processors and spreadsheets for collaboration and editing regardless of what device you use. It’s become natural to take a picture with a phone and immediately view it on a computer or tablet with OneDrive, Google Drive, iCloud, or Dropbox.

Windows 10 promises the next step in that experience, with seamless transitions among all your Windows devices, regardless of their size. If Microsoft can get developers on board – an open question – a program that you install on your computer will also be able to be installed on your Windows tablet and Windows phone with no extra money and no fuss. The programs will be identical on all devices, with only the changes that are appropriate for the different screen size, and data will flow among them all so you are always up to date.

This will be one of the themes this year. Expect constant announcements from all the companies about new ways to have your life flow seamlessly across your devices. Progress is never smooth, so expect some services to work better on one platform or another, and expect quirks and roadblocks. Slowly but surely the rough edges will disappear and we will be less conscious of what device we’re using, because our stuff will be on whatever we have in front of us.

Connection to things around us

The next evolution of our world is about to spring into public view.

Now that we all have computers in our pockets, the next step is to connect those computers to devices that now work independently. Manufacturers and developers worldwide are working to bring the “Internet of Things” to life, automating everything from home thermostats to heart monitoring implants. Chips are going to be embedded in billions of devices that you can interact with from your smartphone or other devices. Literally billions – Gartner estimates that 26 billion devices will become connected by 2020, five short years from now, excluding computers, tablets and phones.

You’ll see this first in articles about technology that seems silly or unnecessary. Your phone senses that you are driving home and turns on the heat in the house. Your front door unlocks when you walk towards it. You can start your washer from your phone. Ha ha! Who needs that, right?

It’s much deeper than that. Wikipedia mentions a few examples:

•  Infrastructure management – “Monitoring and controlling operations of urban and rural infrastructures like bridges, railway tracks, on- and offshore- wind-farms is a key application of the IoT. The IoT infrastructure can be used for monitoring any events or changes in structural conditions that can compromise safety and increase risk. It can also be utilized for scheduling repair and maintenance activities in an efficient manner, by coordinating tasks between different service providers and users of these facilities.”

•  Energy management, medical and healthcare systems, building and home automation, transportation, city management, and on and on. . .

Every conceivable object around you will become a connected device that you can interact with or that can react to you. Remember the mall scene in Minority Report where the ads in store windows start talking to Tom Cruise about his past purchases? Think about what can be done if you can affect every object in your world merely by being physically close to it, because your phone knows you’re nearby and communicates that to the object. And that’s just one aspect of the Internet of Things.

This is going to be an explosion that will change the shape of our world overnight.

Microsoft is working hard to play a role in the Internet of Things. It wasn’t mentioned during the Windows 10 presentation but the groundwork is being laid so that Windows will be the best platform to control devices tomorrow in ways that are not possible today.

Smart, creative people are working on different ways to access all of the information that can be brought to a connected device.

We’ve quickly become used to a device in our pocket with a five inch screen. It’s convenient to carry around and the screen size is big enough for easy interaction.

Google started the ball rolling with Google Glass, an interesting failure that puts a few lines of text in your field of vision, and lets you take pictures or film video hands-free. It inspired more jokes than enthusiasm. Last week Google announced that it would stop selling Google Glass in its current incarnation while it works on a better version.

Apple is taking a different approach with the upcoming Apple Watch, an experiment to see if people find it valuable to have a small display on their wrist connected to the phone in their pocket. Many, many creative people will be trying to think of useful things to put on a 1 1/2 inch screen.

Microsoft, Apple and Google are all working on voice input – Hey Siri! OK Google! Hey Cortana! Cortana will be deeply baked into Windows 10, including her first appearance in desktop and laptop versions of Windows. One of the best moments in Microsoft’s press event was a voice request to Siri to “show the Powerpoint slides on the charity auction.” Cortana did a search of documents on the computer and in OneDrive and displayed the files. Very cool.

Then Microsoft showed off a top secret project at yesterday’s briefing that leapfrogs past anything you’ve ever seen before and takes our world firmly into science fiction.

The Microsoft HoloLens takes see-through glasses and adds a 3D holographic overlay on the world. Journalists came away from the press event dazzled and drooling over the experience in demos. It’s hard to explain. Watch this video (click here if you don’t see the video below).

NASA and JPL will be using the technology in a few months to allow scientists and researchers to walk on Mars examining the surface in high resolution. It’s easy to imagine how awesome a virtual version of Minecraft would be. It’s the Star Trek holodeck in your living room.

Try to imagine what the world will be like if Microsoft is able to make this work as well as it did in the demos, and developers and creative people all over the world build applications for it. Entertainment, collaboration, research, science, education, industrial processes, design: this makes most science fiction movies look old fashioned, and it’s being produced right now on Microsoft’s campus in Redmond.

Wired Magazine got an exclusive early look at the HoloLens, so its article is the most comprehensive online today. There will be more coverage this year as it moves closer to being a product that can be released.

And there will be more. Google will improve Google Glass. It’s time for the first early experiments in connected contact lenses. It won’t be long before some brave company attempts the first implants under the skin. The HoloLens is not the end of any journey, just a stop along the way.

But having said that – the HoloLens looks awesome. It’s ambitious and audacious and I can’t wait to try it.