The Windows 10 Start Menu Is A Cluttered Mess 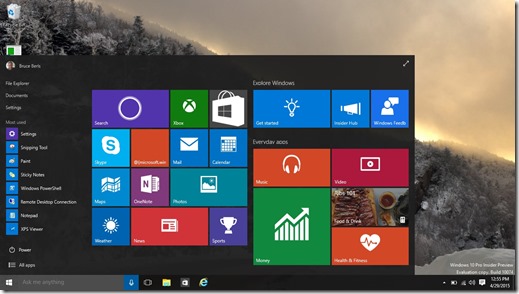 Windows 10 is being tested by millions of people as it enters its final development phase before being released later this summer. Its technical underpinnings are solid and mature. There are genuinely innovative new features. It will be given away for free to more than a billion people worldwide; more or less every computer in the world running Windows 7 or Windows 8.1 will be offered a free upgrade for a year after Windows 10 is released.

Microsoft is betting the company that it can put Windows 8 behind it and extend the dominance of Windows on our computers and laptops for the foreseeable future. No effort is being spared to make Windows 10 into the operating system that everyone will love.

So why am I a little nervous?

Because when I look at the Start menu in Windows 10, I see a cluttered mess. It’s ugly. It makes me recoil in irritation.

And the revamped Start menu, more than any other single thing, was responsible for the downfall of Windows 8, one of the great marketing debacles of our time.

The Start menu, from Windows 95 to Windows 8

Let’s review a little history before we look closely at the above screenshot from the latest Windows 10 Preview.

Microsoft introduced the Start menu twenty years ago with Windows 95. When Windows XP was released in 2001, the Start menu expanded to two columns; the Windows 7 Start menu is only slightly changed from that fourteen-year-old design.

Almost every one of the 1.5 billion Windows users had spent their entire computer lifetime using that Start menu. It was a familiar, known quantity, and as it turned out, a lot of people felt comfortable with the Start menu along with other familiar user interface elements.

Steven Sinofsky, former president of Microsoft’s Windows division, had a vision for Windows 8 that did not turn out well. He believed that Microsoft could create a new interface that would look consistent on computers, laptops, and tablets – not a bad idea. But he also believed that Microsoft could exercise the same clout that Apple used to dictate its new design choices and force users to adopt them without suffering any ill effects from a backlash.

Windows 8 launched with a radically new Start screen, running full screen and filled with large tiles that display dynamic content from each program when possible. When first released, many important controls were off-screen, with no visible power button or search box, and no obvious indication that the list of all programs was down below the main Start screen.

Sinofsky’s insistence that he could force through a pure new vision caused him to make a catastrophic decision in hindsight: there is no built-in way to go back to a Windows 7-style Start menu. Microsoft had always been careful to give users a choice to use older designs before enforcing a big change but gambled big on the Windows 8 Start screen – and lost.

Over the next two years, Microsoft backed away from some of the more harsh design choices, adding an onscreen power button and search box, putting an arrow onscreen pointing down to the list of all programs, and putting an X in the upper right corner of the new full screen Windows 8 apps. Oh, and it arranged the departure of Sinofsky and every other executive who had been part of the disastrous planning for Windows 8.

Three years later and Windows 8 has barely eked out 15% of the worldwide Windows market. It has the stink of death and Microsoft can’t wait to consign it to the dustbin of history.

Microsoft had been in this position before with Vista, which suffered the same fate. Few people could identify why they didn’t want to use Vista; they had “heard” that it wasn’t any good.

Windows 8 is similarly disliked, but the Start screen gives people something to point at to justify why they don’t like the entire OS. The advantages of the Start screen are theoretical and most people are not interested in giving it a chance.

I should mention that I love the Windows 8 Start screen. It’s flexible and effective and I understand and appreciate all the design choices. I took to it right away and use it on all my computers. I’m not pretending that everyone agrees on anything. No matter how I or anyone else feels, the market has stated its opinion of Windows 8 loudly and unambiguously.

When Microsoft announced Windows 10 (the name deliberately chosen to create distance from Windows 8), the most important part of the announcement for normal, non-technical people was that the Start menu was returning. Apparently the goal is to combine the best elements of the Windows 7 Start menu and the Windows 8 Start screen. The result in the most recent test build of Windows 10 is shown in the screenshot above.

I hate it. When I first saw it at the first Microsoft conference presenting Windows 10 many  months ago, I thought it was a mistake or a joke. It hasn’t improved since then.

I’m not sure why it bothers me so much. The tiles that make sense when they’re full screen look wrong on a menu. The left column tries to do too much in too little space. The result looks like the worst of both worlds instead of the best.

That will apparently be the appearance of the Start menu when Windows 10 starts up for the first time in a few months for a few hundred million people. I’m worried that the first impression for many people will be the same as it was for Windows 8: Give me back my familiar interface. I don’t like this.

I work all day with people in small businesses, normal non-technical people getting their work done with computers. I can tell you with confidence that normal, non-technical people do not customize their Windows computers. I can count on one hand the number of people who have done anything to customize their Windows 8 Start screens by sliding tiles around or resizing them or adding tiles for the programs they use most often.

What most people do with the Windows 8 Start screen is ignore it. They stay on the traditional desktop and try never to push the Windows button.

Windows 10 is going to push the look of that tiled Start screen back into their faces, and I’m not sure they’re going to like it. To my eye, it’s something quite different from the “return of the Start menu.” Windows 8 was criticized as a clumsy hybrid of a desktop OS and a tablet OS. The first thing people will see with Windows 10 is a clumsy hybrid of a familiar Start menu and big tiles about which people have already loudly expressed their opinion. Most normal, non-technical people will never customize those tiles, and I fear that people won’t like them.

We now know that an unfamiliar and poorly designed Start menu can bring down an entire operating system. After the Windows 8 experience, why oh why is there not a checkbox that restores a classic Windows 7 style Start menu?

Stardock Software enjoyed massive success with Start8, a simple $4.99 utility that restores the classic Windows 7 Start menu to Windows 8. It’s no surprise that Stardock is already testing Start10. I think it will be very successful.

I think Windows 10 will be very successful, too – but I confess to being a little nervous about it.