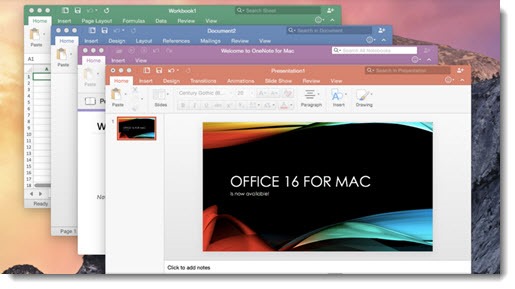 Microsoft has released Office 2016 For Mac, a long overdue refresh of the Office programs that makes the Mac programs visually and functionally identical to the Windows versions. The updated Office programs are available now to anyone with an Office 365 subscription that includes an Office license – details below.

Mac users have been suffering with the dated and clunky Office 2011 for Mac for far too long, while Microsoft worked on mobile versions of the programs for iOS and Android, and prepared the upcoming release of Office 2016 for Windows. With the Mac release, Microsoft has largely finished its ambitious project to bring consistency to the Office programs on all platforms and all screen sizes. The minor differences in the Mac versions are mostly to take advantage of OS X features and integrate into the Mac environment – multi-touch gestures and Retina support, for example.

The new Mac programs – Word, Excel, Powerpoint, Outlook and OneNote – will look familiar to Windows users, with a ribbon across the top and a launch page to create a new file or open a recent document. OneDrive is deeply integrated and is the default location for saving files, as in the Windows and mobile versions.

Outlook and OneNote have actually been available for Mac for several months. Outlook is a particularly important upgrade for Mac users, since the 2011 version was so weak, and it includes a couple of features that won’t be available to Windows users until Office 2016 is released – notably an optional unified view of your Inbox that displays all messages from all email accounts merged together, the way your messages appear on your phone. Worth noting: Outlook 2016 for Mac works perfectly with Office 365/Exchange mailboxes but reportedly has some problems with multiple IMAP and POP accounts. Microsoft has promised that the fix will be out before the end of July.

Word and Powerpoint also permit co-authoring, which Windows users will get with Office 2016 for Windows. I haven’t tried it yet but the idea is that two people can work simultaneously in a document on different computers, with a paragraph lock to prevent them from making conflicting changes. I assume the document has to be stored in OneDrive for that to work, and it implies that changes are saved continuously instead of requiring a click on File / Save. Is that a new default that will reduce the number of calls from clients who have lost unsaved changes after a crash? I’ll let you know.

Important: there are no changes in the Office file formats. Word, Excel and Powerpoint files are identical in Office 2016. You will not have any problems with compatibility.

Office 2016 for Mac is available for anyone with an Office 365 subscription that includes a license for the Office programs. It will be available to purchase separately for a single price in September but no one should get Office that way any more. The subscription is the best deal in town.

For individuals, $99/year buys a license that allows Office to be installed on five computers – Windows or Mac – plus mobile devices, plus 1Tb of storage space on OneDrive, and more.

There’s an easy way to find out whether you have a license for the Office programs. Go to www.office.com and click on Log In in the upper right. You may have two different accounts, a Microsoft account for you as an individual, and an Office 365 account for your business. On behalf of Microsoft, I apologize for the confusion this causes. Either one might have an Office license. Here’s the way to tell the difference between a Microsoft account and an Office 365 account. If you use the same email address for both types of accounts, you’ll see this window to choose between the two accounts.

When you log into a Microsoft account, you’ll be left on the www.office.com page. Click on My Account in the upper right. If you have a license for Office, you’ll see the programs listed for Windows and Mac, with information about which computers are using the license and an Install button. If you don’t have a license, it will say so.

When you log into a business Office 365 account, you’ll be taken to a landing page or your webmail. Click on the gear in the upper right, then click on Office 365 settings / Software. If you have an Office license, you’ll get the same information about where it’s used and an Install button. If you don’t, Office won’t be listed there.

Two things to know about installing Office 2016 for Mac

You’ll have to put the updated programs into the dock in place of the old programs. Microsoft has instructions here.

Windows users will be going through this process shortly, when Microsoft releases Office 2016 for Windows. If you need help sorting out your Office licenses, let me know!